Fifteen Years Later, Sub.mission Is the Oldest Active Dubstep Promoter in the Country

Sub.mission celebrates its fifteenth anniversary on Saturday, April 16. @JVPhotography11
The impact of bass music on Colorado’s culture cannot be denied. Whether it’s the NIMBYs in Morrison complaining about too much bass at Red Rocks or residents of Commerce City thinking that a Bassnectar concert was an earthquake, subfrequency-focused music is a force to be reckoned with in what many call the “Bass Capital of America.”

Founded in 2007, years before commercial dubstep, Sub.mission is one of the primary movers of bass, not only in the United States but abroad, representing many of the largest names in non-commercial bass music with its Sub.mission Agency.

Now, fifteen years later, Sub.mission is the oldest active dubstep promoter in America, and it's celebrating its anniversary at the Black Box on Saturday, April 16, with DJs Coki, Silkie, Sukh Knight, Cimm and Sir Hiss.

But back in 2005, when Sub.mission founder Nicole Cacciavillano moved to Denver, there was hardly a bass-music culture, except for a couple of promotion companies throwing drum-and-bass events. She remembers that it was a challenge to find a venue that would not only host an unfamiliar genre, but also allow the event to bring its own sound system.

“Probably 70 to 80 percent of venues were like, ‘Hell, no. Why would you need your own sound? We have these perfectly good JBL-powered subs,'” she recalls. “Venue owners had no idea why anyone would need it louder than it already was.”

Eventually, she would find Kazmos, at 14th and Kalamath streets. “Kazmos was the grunge bar; the owner didn’t care [what you did],” she says.

For her first event in Denver, Cacciavillano worked with drum-and-bass promoter Recon to bring glitch-hop producer edIT to the grimy floors of Kazmos, where Recon had been hosting events. She realized that people in this state enjoyed that sound, and she began her career as a Colorado event promoter.

But there was another challenge: Booking dubstep DJs was not as easy as it is today, when you have your pick of the litter. To fill this void, Cacciavillano linked up with the late Mike Honcho (MekaOne) and a cast of other Colorado DJs. Through their connections, she naturally found more DJs to form the original Sub.mission crew, which consisted of Budros Gali, MekaOne, ServOne, Dayquill and RumbleJunkie.

Freshly branded as Sub.mission, on April 7, 2007, the group brought Nick Argon to Colorado, who, besides Joe Nice, was the only person in the United States championing such music at the time. The event's success signaled that there was a thirst for the sound, but most of that music was being made overseas, and no international DJ had come to the U.S. at that point.

Coordinated between multiple promoters on the online messaging board Quarter Forums, a cohort of national event producers was able to bring dubstep pioneers Hatcha and Benga to play a series of shows in the United States, including a Sub.mission event in October of 2007 at the now-defunct Bender’s Tavern. This marked the first time that an international dubstep DJ had made it to the United States, a cultural milestone in the lexicon of global dance culture. 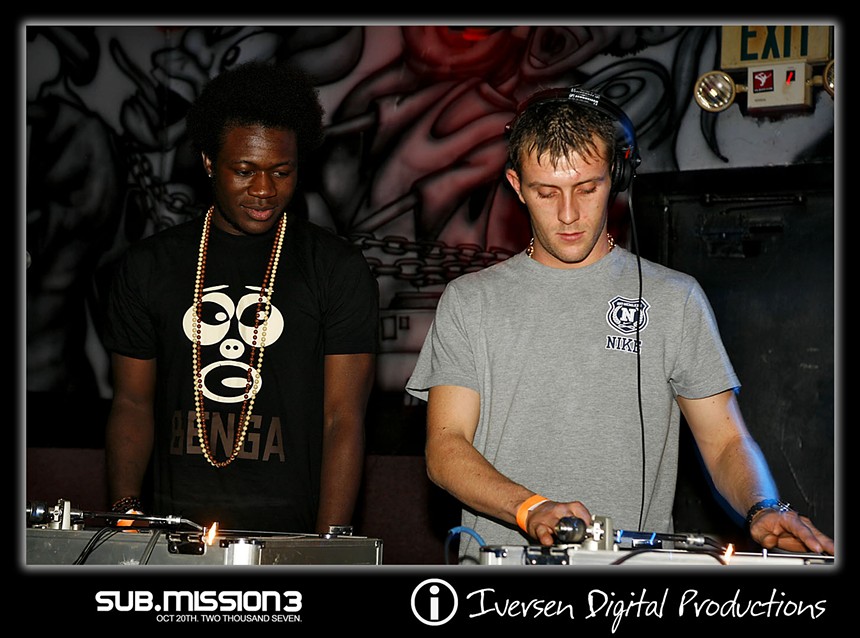 Benga (left) and Hatcha (right) were the first international DJs to play in the United States, including at Sub.mission.
Iversen Productions
By 2008, Sub.mission had migrated out of Kazmos and found a home in the basement of Club Vinyl. Also in 2008, Beta opened and started throwing shows in the venue's Beatport Lounge. Sub.mission quickly outgrew that space, earning a spot in Beta’s main room on Wednesdays.

“This was pre-soundproof Beta, so there were a lot of neighbors complaining, and it just wasn’t the vibe I wanted, so I found Cervantes',” says Cacciavillano. At Cervantes', Sub.mission started its internationally renowned Electronic Tuesdays, which were known for DJ battles, local residencies and headliner appearances.

Sub.mission started these DJ battles to sift through the hyper-competitive bedroom DJ scene that the group had cultivated in its wake. “Sub.mission was throwing three or four shows a week, and as the only dubstep promoter, I needed to see someone deejay before I would book them on a support show — because if they couldn’t deejay, it would be an embarrassment for myself as a person who is trying to build all these artists up," Cacciavillano says.

She finds the sheer amount of talented producers who got their start at the battles quite staggering. “At Electronic Tuesdays, every local bass-music artist has started at our DJ battles,” she notes. “I’m talking Illenium, who is now selling out Red Rocks.”

In the early days of Sub.mission at Cervantes', the corporate takeover of EDM had not quite materialized. Then, between 2010 and 2012, the event started selling out the venue, which caught the attention of multi-national producer AEG.

This led to Sub.mission booking all of AEG’s dubstep shows. Nearly every dubstep show that was thrown in Denver was a Sub.mission show, including those at Red Rocks and the first two Decadence events.

“At this point, it went from playing anywhere that people would have us to being able to pick and choose the venues based on venue size and the number of tickets we expected to sell,” Cacciavillano remembers. "It was crazy, and it was out of control."

She soon realized that her heart wasn’t in the mainstream. She got into promoting shows because she wanted other people to feel how she felt when she first heard this kind of music. “Getting into the corporate world, you realize that these DJs aren’t in it for the music; it’s their job," she says. "They have a budget. This is just what they do, and the promoter doesn’t really matter to them anymore.”

She recognized that the only way to properly express why she got into promoting was to open her own venue, and she began hiring and training staff with that intention. Then one day she saw a post on Facebook by club owner Jay Bianchi, saying he was having a hard time with Quixote's on East 13th Avenue.

After a series of exchanges, Bianchi ended up selling the space to Cacciavillano in 2016, and the Black Box was born. Serendipitously, this building used to be Bender’s, where Sub.mission threw the first international dubstep show in the country, way back in 2007.

Being at the Black Box for the past five and a half years has liberated Sub.mission from the mainstream grind and allowed it to refocus on the creed that it set out to follow fifteen years ago: “The potential for moving people through sound, not hype.”

"We live in a culture now where these kids have grown up with the Excisions and the more ‘brosteppy’ DJs,” Cacciavillano says, where the crowd expects intense drop after drop. However, she notes that that is not what proper dubstep is about; rather, the music is about the journey, with sets that ebb and flow in intensity and mood, keeping the listener engaged.

That's what she finds exciting about the Sub.mission shows, and proper dubstep in general. “These producers write music to fit into sets that are a journey and the experience," she says. "And now that I own a venue, I can watch how this music affects people on a daily basis, and I know the looks, because I’ve been there. I know that music heals, and that is my biggest motivator.”

Sub.mission's 15th Anniversary, 8 p.m. Saturday, April 16, the Black Box, 314 East 13th Avenue. Tickets are $40.
KEEP WESTWORD FREE... Since we started Westword, it has been defined as the free, independent voice of Denver, and we'd like to keep it that way. With local media under siege, it's more important than ever for us to rally support behind funding our local journalism. You can help by participating in our "I Support" program, allowing us to keep offering readers access to our incisive coverage of local news, food and culture with no paywalls.
Make a one-time donation today for as little as $1.