Guitar Lovers, Unite: GUITAR: The Instrument That Rocked the World Comes to the Denver Museum of Nature & Science

“We’re excited about this group of people because they represent a lot of different genres and span age groups,” says Lindsey Housel, experience developer for the museum. “As you go through the exhibit and you're seeing all these different guitars and hearing all the different sounds and getting the science behind the instrument as well, you might see people you know from town in there.”

Housel says guests will not just see guitars, but will also experience video and audio footage at various hubs around the gallery that provide hands-on experience with instruments. There’s also a jam room. 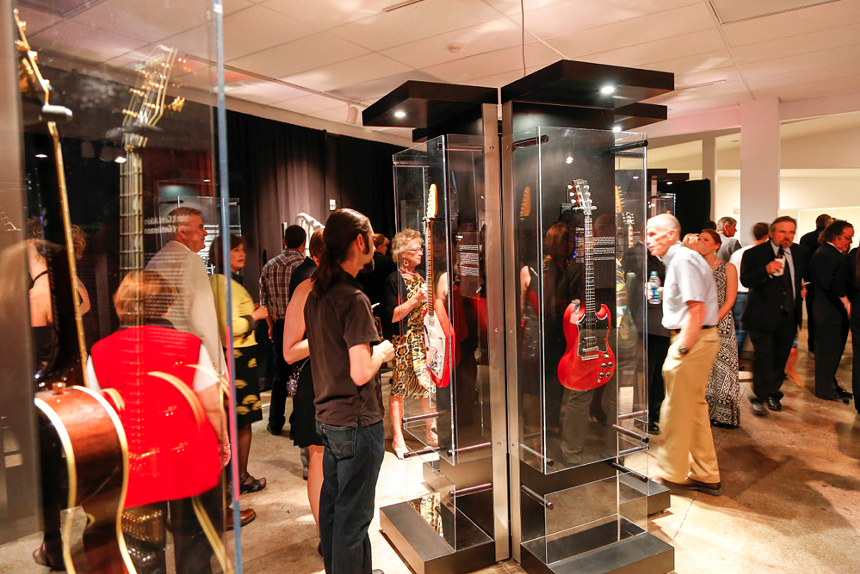 Visitors will explore many variations of guitars at the exhibit.
Courtesy of the National GUITAR Museum
“At different times throughout the exhibit, you're going to be able to come in and you might see electric and acoustic guitars and even a slide guitar that you can actually get your hands on and play,” Housel says. “There’s also a luthier’s bench, so you'll actually get to see the insides of a guitar and get a sense of how they're made.”


The exhibit also includes the world's largest playable guitar. The 43-and-a-half-foot instrument has been certified by Guinness World Records as the planet's largest electric guitar.

“It’s going to be super fun for kids and families,” Housel promises. “You can actually play it. You can strum the world's largest guitar string and see what that sounds like. And, spoiler alert, it's a very bizarre sound.”

While GUITAR will appeal to guitarists and music lovers in particular, the exhibit also provides STEAM concepts such as sound waves, frequency, mathematical scales and engineering through a wide range of hands-on experiences. Housel says that's one of the reasons the Museum of Nature & Science is hosting the exhibit, along with the guitar’s impact on music culture.

“There is the whole storyline of the science and physics behind the instrument itself,” Housel says. “And then on top of that, there's the cultural aspect of it, where an instrument has been this well-known to people all over the world for so many years of our human history. So there's a really cool opportunity to see the different ways that shows up all around the world. There are four stringed instruments that people would think of as guitars, too, and multi-neck ones. You'll really see every almost every iteration of a guitar that you can imagine.”

Housel says GUITAR isn’t necessarily set up chronologically, but there are different sections such as Roots and Relatives, which looks at instruments that have been around since before the amplifier.

“You'll see things there that originated thousands of years ago, where our ancestors would have played guitar-like instruments,” Housel explains. "And you'll also see things in that section like the banjo and mandolin and even other types of instruments that have different names besides 'guitar,' because the word ‘guitar’ really was a Europeanized kind of word that gained popularity in Europe.”

“Whether you relate to that on the instrument sort of level, like you play it or you've heard it played — we all have a story about a piece of music or an experience you've had where guitars are involved,” she says. “We show up to anybody's house with a guitar, and we’re in.”

Since guitars have gone hand in hand with amplifiers and effect pedals over the past five-plus decades, those are also part of the exhibit, demonstrating how different sonic environments can be created using combinations of all three.

“Some people who might be coming for the music or coming for the guitars themselves maybe haven't thought about those aspects of it — or maybe that's all they think about,” Housel says. “I think there's a lot to explore and get curious about and have fun with, and try stuff out yourself experimentally.

“When we were asking about interactive things and multimedia stuff, we definitely wanted to see a section, and also throughout the exhibit, that is focused on the sounds of science," she continues. "Not only are you seeing like how they're crafted and how the materials and the shape affects the tone or the size of something, but also like how you can influence volume and effects through those pedals or even like choice of strings.”

Since GUITAR: The Instrument That Rocked the World first started in 2011, the exhibit has traveled to more than two dozen cities and will ultimately become the basis for the National GUITAR Museum, the first museum in the United States dedicated to the history, evolution and cultural impact of the instrument. Guitar legends such as Steve Vai, Steve Howe, Tony Iommi, Liona Boyd, Joe Bonamassa and Ritchie Blackmore are current advisors for the museum.

To go along with the exhibit, Housel has also put together Guitar Sessions, a monthly series that starts in January and includes conversations on music hosted by Indie 102.3’s Bruce Trujillo. These sessions will be broadcast live from the exhibit with limited in-person seating. Guests include Anna Morsett from the Still Tide on January 6, Stevie Gunter of Waiting Room and TúLips on February 3, and Jen Korte on March 3. Felix Fast4ward closes out the series on April 14 in Gates Planetarium, where he’ll talk about his relationship to the guitar and share stories about getting on the road.

GUITAR: The Instrument That Rocked the World runs from November 19 through April 17 at the Denver Museum of Nature & Science. The exhibit is included with general museum admission. Learn more at dmns.org/guitars.
KEEP WESTWORD FREE... Since we started Westword, it has been defined as the free, independent voice of Denver, and we'd like to keep it that way. With local media under siege, it's more important than ever for us to rally support behind funding our local journalism. You can help by participating in our "I Support" program, allowing us to keep offering readers access to our incisive coverage of local news, food and culture with no paywalls.
Make a one-time donation today for as little as $1.