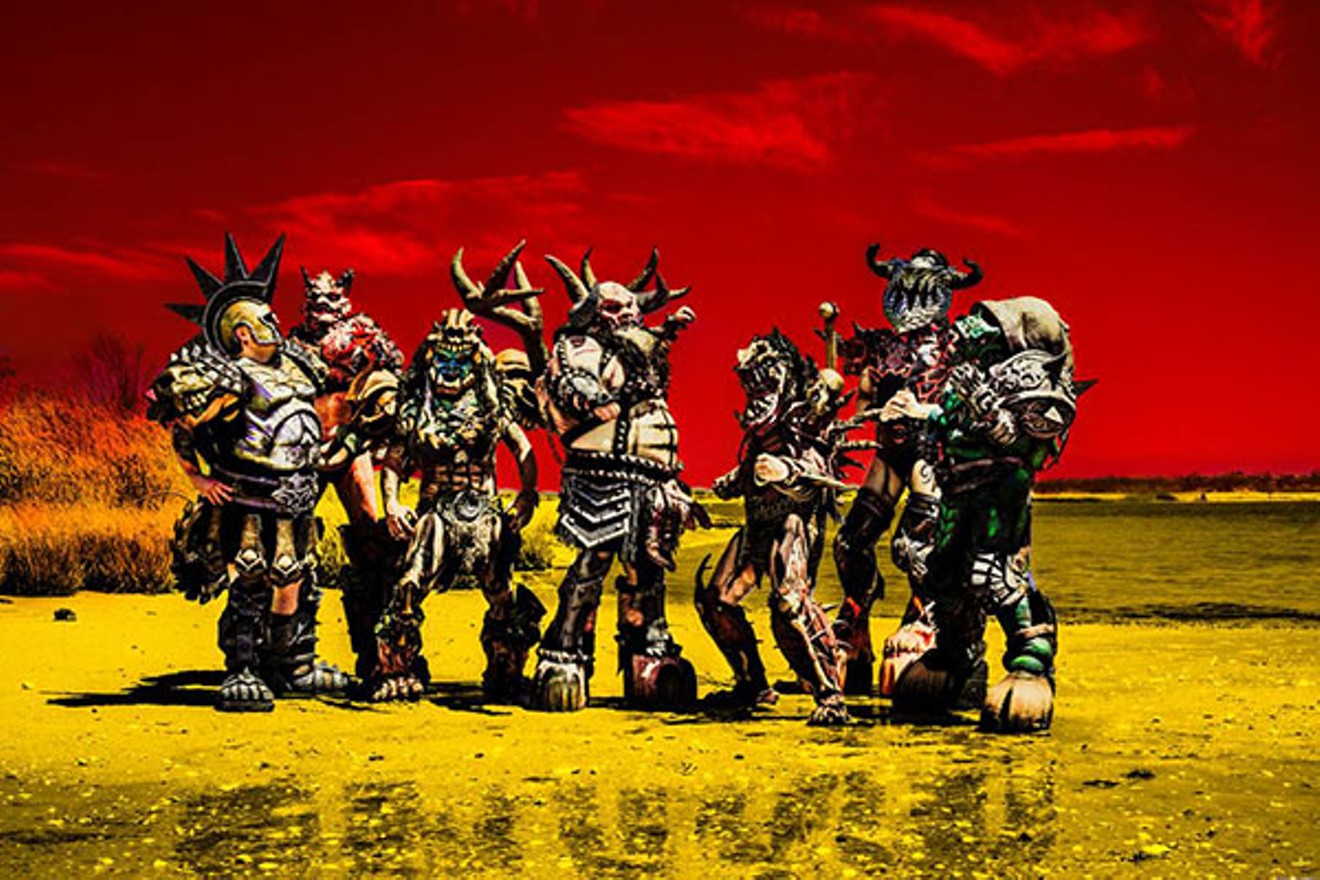 The last song on GWAR’s brand-new album, The Blood of Gods, is a cover of AC/DC’s “If You Want Blood (You Got It),” which could have also been the band’s slogan for the past three decades. There are insane amounts of fake blood that spew from the outrageous costumes of these barbaric intergalactic scumdogs, who claim to hail from deep in the ice of Antarctica.

Lead guitarist Pustulus Maximus, who joined the metal band in 2012, says the current tour is the bloodiest yet.

“You can tell by the amount of puddling on the floor as everybody leaves that, yes, this is definitely the most bloody,” he says. “Sometimes they can’t get enough, and they’re bloodying themselves up in the mosh pit, you know, punching each other out and shit, which I encourage.”

Maximus says typical GWAR fans have murdered their parents in their sleep and are people with extremely volatile personalities.

“They might go on a rampage at any moment,” Maximus says. “I’m just judging by the ones that I like. But there are some other ones out there. I mean, the average GWAR fan, I think they have a pretty good grasp on humor, to say the least. You've got to have a sense of humor, and you obviously have to have a thick skin to be able to,  one, survive the live show, and two, just to be able to listen to the music. A lot of people get their feelings hurt very easily these days. I mean, GWAR is here to tell you that nothing is sacred.”

And by nothing sacred, they mean religion, fast food, factory farming and politics, particularly the president, on the song “El Presidente,” from The Blood of Gods, which includes the lines “I want to kill the president, and I don’t need a gun,” and “El Presidente and his whore/They will die by my sword.”

“We’ve always got presidents in our sights, for sure,” Maximus says. “But this one I take great pleasure in disemboweling.”


On the band’s current tour, someone dressed in a Trump costume is “disemboweled,” with fake ribs and intestines on display, while copious amounts of blood spurt from his heart.

“We tour a lot,” Maximus says, “and we always try to put on a bad-ass rock show, and people keep storming the stage, trying to attack us, trying to steal the spotlight, and Trump’s no different. We turn all the wi-fi off when we play so he can’t Tweet at us. He just shows up on stage, and we have to dispatch him as quickly as possible, because we don’t put up with that shit.”

Aside from not wanting to put up with Trump’s shit, the dudes in GWAR wanted to prove that they don’t suck on The Blood of Gods, the band’s first album since the passing of GWAR founder Oderus Urungus in 2014.

“The new record is just a testament to what GWAR is, in the ever-changing evolution that we have to go through,” Maximus says. “I think one thing that you can be certain of with this band is that change is inevitable and a necessity to grow. So I don’t think this is the type of band that’s going to regurgitate records and sound the same over and over again. I think that we’ve made the best of a terrible situation, quite frankly, and the new record reflects that. It reflects our choices, our song structures, our writing abilities. It’s a good thing to have under our belts, for sure.”

Maximus also says that if you’re a GWAR fan, you shouldn’t get used to things always being this way, adding that there will likely be lineup changes and musical style changes throughout each song cycle.

“And quite frankly, if we didn’t do that, this would be fucking boring as shit,” Maximus says. “And, of course, we have a high turnover rate these days within all the...once people claim — because we sexually harass all of our employees. That’s mandatory. We’re going to be losing people left and right here soon. We’ve been trying to keep corporate from starting an HR department. I think I’m going to be the head of HR, because I’m a good listener.”