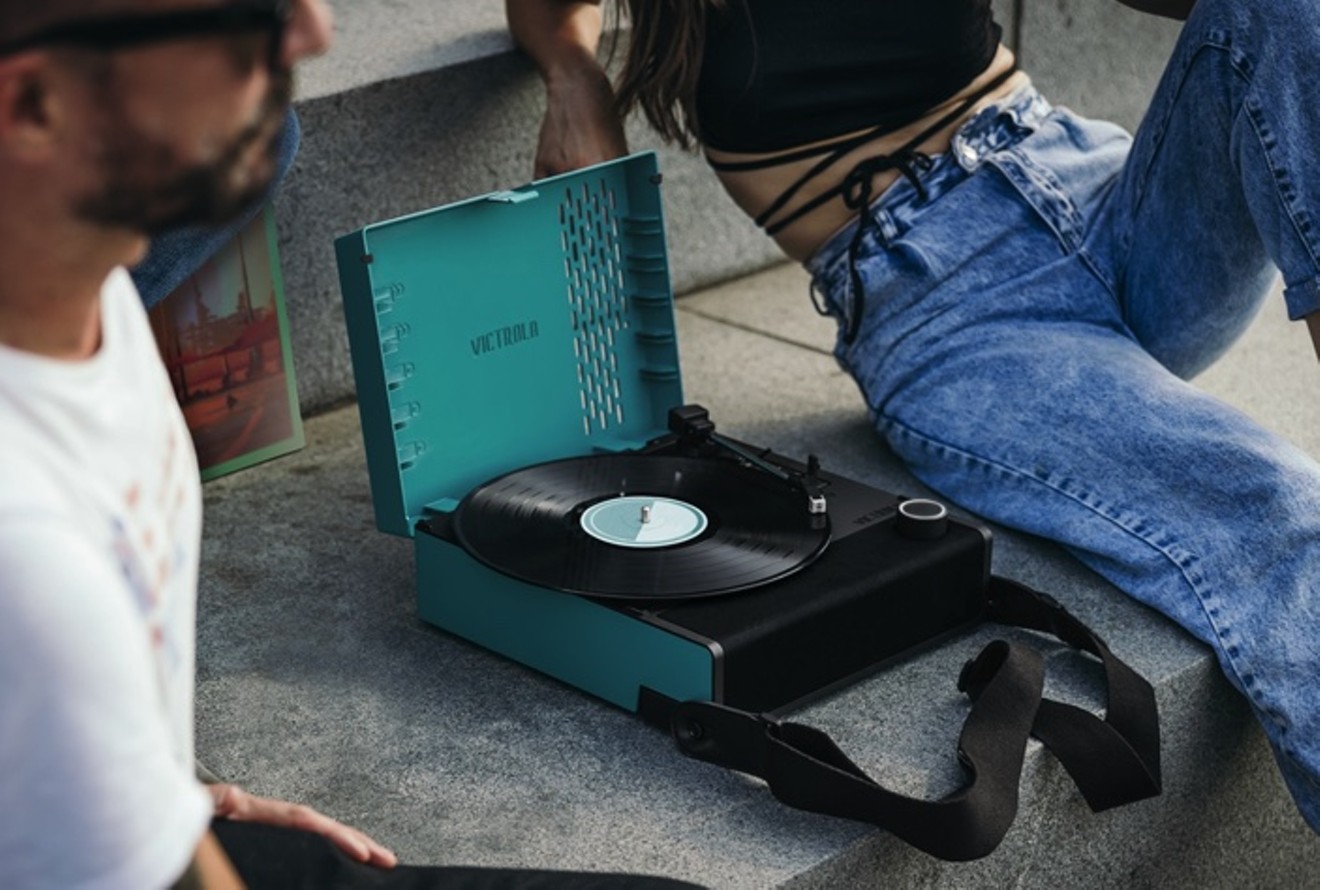 Victrola is partnering with Thompson Hotels to have record players at the hotel's new Denver location. Courtesy of Victrola
The soon-to-open Thompson Denver has teamed up with Victrola to provide guests with a novel addition to their stay at the boutique hotel at 1616 Market Street: record players.

Victrola, an iconic name in the stereophonic industry, moved its headquarters to Denver last year; it is installing a variety of its turntables in some Thompson suites and bluetooth-enabled radios in all of the rooms. The hotel will also have a turntable-equipped listening lounge on the sixth floor, and guests will be able to check out a portable Revolution GO record player to take with them around town.

According to Victrola CEO Scott Hagen, the partnership came about because the two companies considered themselves “newbies” to Denver and realized they shared some of the same goals for engaging with their new community. During their conversations, representatives of both companies realized that music is an integral part of Denver’s culture, and they began to discuss how to bring that culture into the hotel and its rooms.

“We really wanted to create these experiences on the property and in the room,” Hagen says. “[Thompson] just really wants these to be memorable experiences. They felt the Thompson hotel could be this destination, if you will. Somebody would come to visit and they would just be delighted.”

“Whether you are traveling the world with friends or listening to a new album from beginning to end, life’s moments are created through these experiences,” Parsons says. “By pairing our passion for culture and shared experiences, our partnership enhances the strengths each entity brings to life.”

Music has shaped Denver’s culture over the years, she notes, adding that the same is true for Thompson hotels.

“To be able to collaborate with an internationally renowned but locally based brand like Victrola to provide our culture-savvy guests such a unique amenity is very exciting,” Parsons says. “We are thrilled to offer our guests access to Victrola’s collection of innovative yet timeless record players.”

She adds that Denver’s live-music scene reaches all neighborhoods, crosses all genres and boasts numerous amphitheaters, stadiums, outdoor venues and stages that host a diverse array of acts.

"It has become a destination for many music enthusiasts,” she says. “Our partnership with Victrola reflects the music culture in this city and gives our travelers a one-of-a-kind music-listening opportunity.”

Suites in the hotel also have their own record collections, and guests will also find records to play in the sixth-floor lounge. Hagen also hopes guests hit up at least one of Denver's many record shops.

“I think you are going to definitely find some content that is relevant and or tied into the Denver community,” Hagen says. “It won’t be just that. I think one of the things you’ll find in this lounge and other areas is content and music that will help you reflect a bit on memories you’ve had in the past, but also create new memories.”

The hotel will also have a portable record player available for guests to take with them around town, wherever that might be.

“They wanted to encourage their guests to go out and explore Denver and see Denver and hear Denver and feel it,” he says. “If they are taking a bike from the property and head out to maybe one of the local parks for a picnic, we want to be able to provide this product for them to go out and listen and experience Denver.”

Vinyl has experienced a huge resurgence in recent years, and Parsons's father had an "epic record collection," she says. "I mean epic. We used to spend hours sitting in front of the player listening to music. As I got older and my musical tastes evolved, that tradition only got stronger. To this day, my father and I trade music.”

She adds that there is something special about having a soundtrack to your life, and she loves the ceremony, patience and anticipation that vinyl brings to the music experience.

Hagen says that liking vinyl is kind of a prerequisite for working for Victrola. He loves vinyl, he explains, because it forces listeners to slow down and take in a whole album, providing a deeper connection to the artist.

“When I put a record on and I’m with my fifteen-year-old son, we actually listen to the whole record,” he says. “More music is consumed than ever before in the history of the world, but it’s not consumed in that way. It’s usually consumed when you are in a packed coffee shop. You might like it, but you aren’t going to remember it half an hour or an hour later.”

The Thompson Denver, 1616 Market Street, opens Thursday, February 17. For more information on Victrola, visit victrola.com.
KEEP WESTWORD FREE... Since we started Westword, it has been defined as the free, independent voice of Denver, and we'd like to keep it that way. With local media under siege, it's more important than ever for us to rally support behind funding our local journalism. You can help by participating in our "I Support" program, allowing us to keep offering readers access to our incisive coverage of local news, food and culture with no paywalls.
Make a one-time donation today for as little as $1.