After Teachers' Strike Ends, Denver School Board Is Next Battleground

The current members of the Denver Board of Education (from left): Barbara O'Brien, Lisa Flores, Jennifer Bacon, Allegra "Happy" Haynes, Carrie Olson, Angela Cobián and Anne Rowe. board.dpsk12.org
The Denver teachers' strike has ended, pending a vote by members of the Denver Classroom Teachers Association, who are expected to endorse a pact negotiated with Denver Public Schools. But the fight over the future of public education in the Mile High City isn't over.

According to Wendy Howell, deputy director for the Colorado Working Families Party, the next battleground will be the November 2019 election for the DPS board of education.

"We will certainly be playing an active role," Howell says about her organization, whose website identifies its mission in part as "building progressive power to renew the American Dream." She adds, "We plan to work with other stakeholders who will help us identify candidates with the best chance of winning and who represent a pro-public education viewpoint. And then we'll work like hell to get those people elected."

The party remained a strong supporter of teachers throughout the strike, and Howell was on hand during the wee hours of February 14 as negotiations in the basement of the Central Denver Public Library lurched toward their conclusion after three days of walkouts. Afterward, she felt pleased by the outcome, but she admits to some frustration that a resolution hadn't come prior to a work stoppage, particularly since talks began more than a year earlier.

"I think what we saw was that the Denver Public Schools' administration was just not willing to hear what teachers and students needed until they took this kind of dramatic action," she says. "And that's unfortunate and speaks to a larger problem within the school system about valuing the voices of outside interests over the voices of parents, teachers and students within the system."

An image of protesters at Northfield High School during the recently concluded Denver teachers' strike, as shared by the Colorado Working Families Party.
Facebook
Exemplifying these interests in Howell's view is Democrats for Education Reform, a deep-pocketed national advocacy group that's donated heavily to assorted Denver school board candidates and endorsed current members such as Allegra "Happy" Haynes, Anne Rowe and Lisa Flores.

Because, in Howell's view, DFR "was formed to be the kinder, gentler face of school privatization," the presence of the "Democrats" in its moniker has provoked some consternation in Colorado. Indeed, last April, delegates at the party's state assembly cast a vote demanding that the word be removed from the outfit's name. But this call has been ignored to date, and the group's online presentation uses plenty of other liberal verbiage. For instance, one passage talks about the promotion of "progressive policies that best serve students is making a real difference — especially for students of color and students from low-income families."

Senator Cory Booker and the Obama administration are also referenced. But in addition to areas of focus that include "resource equity — so that funding goes to the students and schools that need it most" and "teacher quality and preparation — so that more students receive the high-quality public education they deserve," DFR also touts "public school choice — so that all families can choose the public school that best meets their child's needs."

Public-school supporters often see "choice" as code for a desire to dismantle the system entirely and hand it over to for-profit entities they fear are more interested in profits than educating the next generation of Americans.

Meanwhile, union types in Denver are frustrated that charter schools are staffed by instructors who aren't members, since that could potentially dilute their power when demanding higher wages and the like — although that didn't seem to be the case with the just-concluded strike, despite the fact that charters represent around 25 percent of the total institutions in DPS. 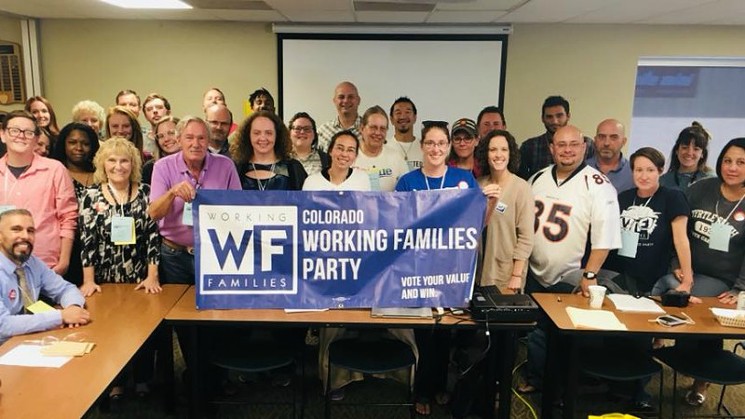 A photo from the Colorado Working Families Party Facebook page.
Facebook
Howell stops short of rejecting the charter concept entirely, but she's far from a true believer. "There are good charters and there are bad charters," she maintains. "But what we've seen is that in just about every system out there, what was once well intentioned as a reform has been taken advantage of by those with an agenda beyond that. And that agenda is to bust teachers' unions and to privatize public education. So we believe there absolutely needs to be charter-school reform, tighter accountability and more controls about how they work the system to cherry-pick students, among other things."

As for ProComp, a teacher-compensation system disliked by the union but used by DPS to supplement salaries with an assortment of bonuses for teaching in low-performing schools, taking hard-to-fill positions, etc., Howell sees it as "a symptom of a larger problem at DPS, which is that the district has been a playground for experiments on education. Our students in Denver are essentially being experimented on, and what we've seen is that most of these experiments have failed. Denver still has one of the largest opportunity gaps in the nation. The results are in, and it's time we go back to a time when schools were really the center of communities and establish a model for neighborhood, community-based schools."

To that end, the Colorado Working Families Party is targeting three Denver school board seats — the two belonging to Haynes and Rowe, who are term-limited and can't bid for another stint, and a third occupied by Flores, who's seeking re-election.

No one knows who will make a play to replace Haynes and Rowe, but Howell has no doubt that "DFR will run people for them" who are likely to try to extend the legacy of their predecessors.

The CWFP has had recent success with countering this strategy. In 2017, the organization backed Dr. Carrie Olson, who won, and regards Jennifer Bacon, also elected that year, as someone who stands on the side of educators and public schools. And while it'll likely be a few months before she and her colleagues decide whom to back in 2019, Howell notes that electing three candidates who see things as Bacon and Olson do would result in a solid majority on the board.

She's determined to make that happen, and she knows exactly how to go about it. "One of our mantras," she says, "is 'We will do with people what the other side does with money.'"
KEEP WESTWORD FREE... Since we started Westword, it has been defined as the free, independent voice of Denver, and we'd like to keep it that way. With local media under siege, it's more important than ever for us to rally support behind funding our local journalism. You can help by participating in our "I Support" program, allowing us to keep offering readers access to our incisive coverage of local news, food and culture with no paywalls.
Make a one-time donation today for as little as $1.