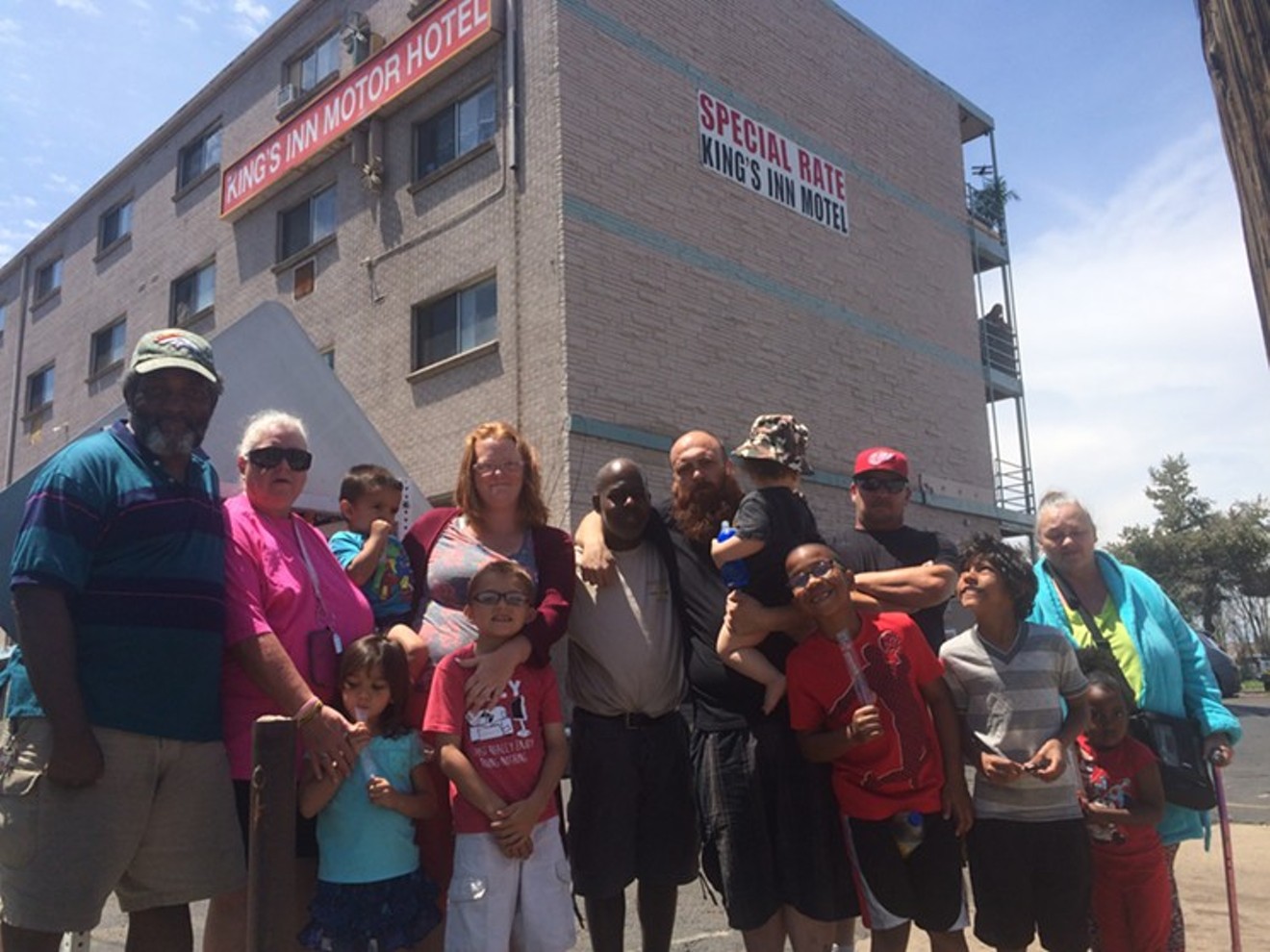 Long-term residents of the King's Inn Motel faced homelessness after management doubled the room prices overnight. Leon Elkins, left, is receiving funds from the City of Aurora to live in a hotel while he finds a place to rent. Grant Stringer
On June 7, the King's Inn Motel on East Colfax Avenue was in crisis mode. Residents, some of whom had lived there for as long as fifteen years, were outraged to find that the motel management was changing hands — and that the new managers had nearly doubled the prices overnight, despite filthy living conditions. Moreover, residents said that the new managers were threatening unlawful, on-the-spot evictions.

That left many residents of the 92-room motel turned home priced out. And with no where else to turn, they reached out to the City of Aurora for help.

In response, the city approved $80,000 in marijuana tax revenue to resettle residents of the enormous motel and to make sure that residents didn't end up on the streets. Then, on August 7, another $200,000 — also from pot tax revenue — was set aside for a "flexible housing fund," earmarked for anything from security deposit payments, first and last months' rent, short-term hotel stays and even gas money for residents to move in with relatives across the country.

According to Aurora's homelessness program director, Shelley McKittrick, 58 "households" at the King's Inn reached out to the city for assistance. So far, she says, 39 households have been resettled in leased apartments or houses, two households are enrolled in housing voucher programs, two more are living in short-term hotels looking for a leased home, and fifteen households have either left Aurora or resettled themselves. Aurora has spent an average of about $2,300 per household.

For Leon Elkins, who lived at the King's Inn for fifteen years before he was priced out, the motels on East Colfax — which offer some of the lowest-income housing options in the Denver metro — are all either too dirty or full.

"Because of the aggressive way that these people came in, almost doubling the rent, the city stepped in," says Elkins. "And a lot of people had nowhere to go, and couldn’t find either hotels or apartments for the same price. So the city has been moving people so they had a place to stay, because no one could afford double the rent — and I mean no one. It was impossible."


"For folks who are homeless, every day is a crisis. And we need to have that sense of urgency."

Before the new management arrived, Elkins and his wife were able to make a deal with the old managers of the King's Inn to live there for free: He worked security for over seven years at the motel, and his wife worked in the front office. So when the new management took over and raised the prices, Elkins says his monthly rent spiked from $0 to $2,400.

Aurora stepped in and provided Elkins and his wife with a hotel room for one month until they can sign a lease at an apartment or house.

McKittrick calls the approach to the June 7 fiasco a "crisis response." Even though the city prevented a mass eviction, the program director is adamant that the same response needs to be applied to other situations where residents are living on the margins of homelessness. "For folks who are homeless, every day is a crisis," she says. "And we need to have that sense of urgency."

For many residents, the main barriers to moving out of the King's Inn were the steep cost of moving into a leased apartment or house, including application fees, security deposits, and first and last months' rent. As a motel, the King's Inn only required day-to-day, week-to-week or even month-to-month payments, which lowered the cost for households and enabled many residents to live there for years.

In its resettlement program, the city itself isn't directly cutting checks to displaced residents. Rather, the funds are directed to homeless organizations such as the Colfax Community Network or Aurora Warms the Night, which then transfer the funds to residents for a variety of uses. McKittrick says that the city recently paid for a family's bus tickets back to Atlanta, where they have relatives, and paid for another family's gas money to travel to rural Missouri, where the rent is cheaper.