Residents at the King's Inn Motel in Aurora, who face homelessness. Grant Stringer
Hundreds of low-income, disabled and veteran residents of an East Colfax motel face homelessness after they say that a landlord "astronomically" raised room prices without any notice of the change in rates, then demanded their eviction when they protested the increase.

Now residents of the King's Inn Motor Hotel — some of whom have lived in the low-cost motel for decades — say that they cannot afford the rate increases and will be forced out into the streets if prices do not come down. Residents of the motel call themselves tenants. "At a motel, they have laundry, breakfast, linens — and we don't have any of that," says Jodie Mitchell, who has lived at the hotel for three years. "There are just cockroaches, mold everywhere, and mice.

"We don't have anywhere else, but we are legally qualified as residents," she adds, saying that those living at the motel are entitled to the same legal rights as tenants, who must be given prior notice of an eviction and can take a landlord to court.

The King's Inn was bought on Friday, June 2, by Avi Schwalby, who owns six other motels on East Colfax. When Mitchell and other residents walked into the motel office to pay rent last weekend, they saw that prices had almost doubled, even though the previous owners promised that nothing would change once the Inn was sold. No one could afford the increases.

Mitchell, who paid $225 a week for a small room, says that Schwalby initially demanded $455 at the beginning of the month before eventually lowering the price to $385 after the outrage. Miranda Swaney, a mother of three who has lived at the motel off and on for seven years, says that her rent has doubled.

But the last straw, residents say, was when Schwalby's adult son Shaun threatened to kick in their doors while openly carrying a gun on his hip. Shaun Schwalby denies threatening residents with a gun and says that he keeps his 6mm pistol locked in a safe. 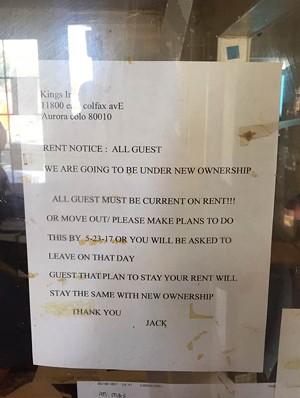 A memo that was posted on the window of the King's Inn office. Previous management told residents that prices would not rise with the change of ownership.
Ryan Mitchell and Marihya Manuel
Mitchell, Swaney and dozens of residents confronted the Schwalbys outside of the motel office on Tuesday, June 6, demanding that they be legally evicted if necessary, but not threatened.

"Evict me! But don't knock on doors with a gun," said Mitchell amid the shouting.

"Move out!" Schwalby shouted to the group of residents. "If you can't afford to live here, move out!"

Later that afternoon, Shaun Schwalby says he called the police to "help [him] move" two tenants who would not or could not pay under the new prices. However, Aurora Police arrived shortly after and prevented the impromptu evictions, telling Westword that landlords "just can't go in and just evict someone that's been there and has established residence for a long period of time... There is that legal process that they have to go through." The police added that Schwalby had been "educated" about the law.

In Colorado, an eviction cannot legally take place on the spot. Instead, tenants must be given three days' notice to have time to clear out, and even then, they have the right to dispute the eviction in court. Tenants on month-to-month leases must be given notice at least seven days in advance.

"I didn't buy this place to lose money," he says. "Nobody likes changes, but that's what it is.... This is not going to make me a rich man here. First of all, I want to break even, if I can."

Schwalby says that prostitution and gangs have been a big problem in the area. "You have prostitution, you have gangs here every night with something else," he says. "I'm not going to let [my son] live here without — God forbid — changes."

He also called the Inn "junk" and says that "there are the lowest, lowest people here."

Residents have typically paid the Inn on a weekly or monthly basis, and dozens at the 91-room motel have lived there for over five years. They say that the price has always been so cheap that it wouldn't have made sense to leave.

Mitchell says that residents will defend their legal right to an eviction if need be, and that "we might even have a lawyer secured soon for a class action lawsuit."

The story originally misreported the frequency a month Jodie Mitchell pays the hotel.