Boebert Watch: Deep in the Heart of Texas 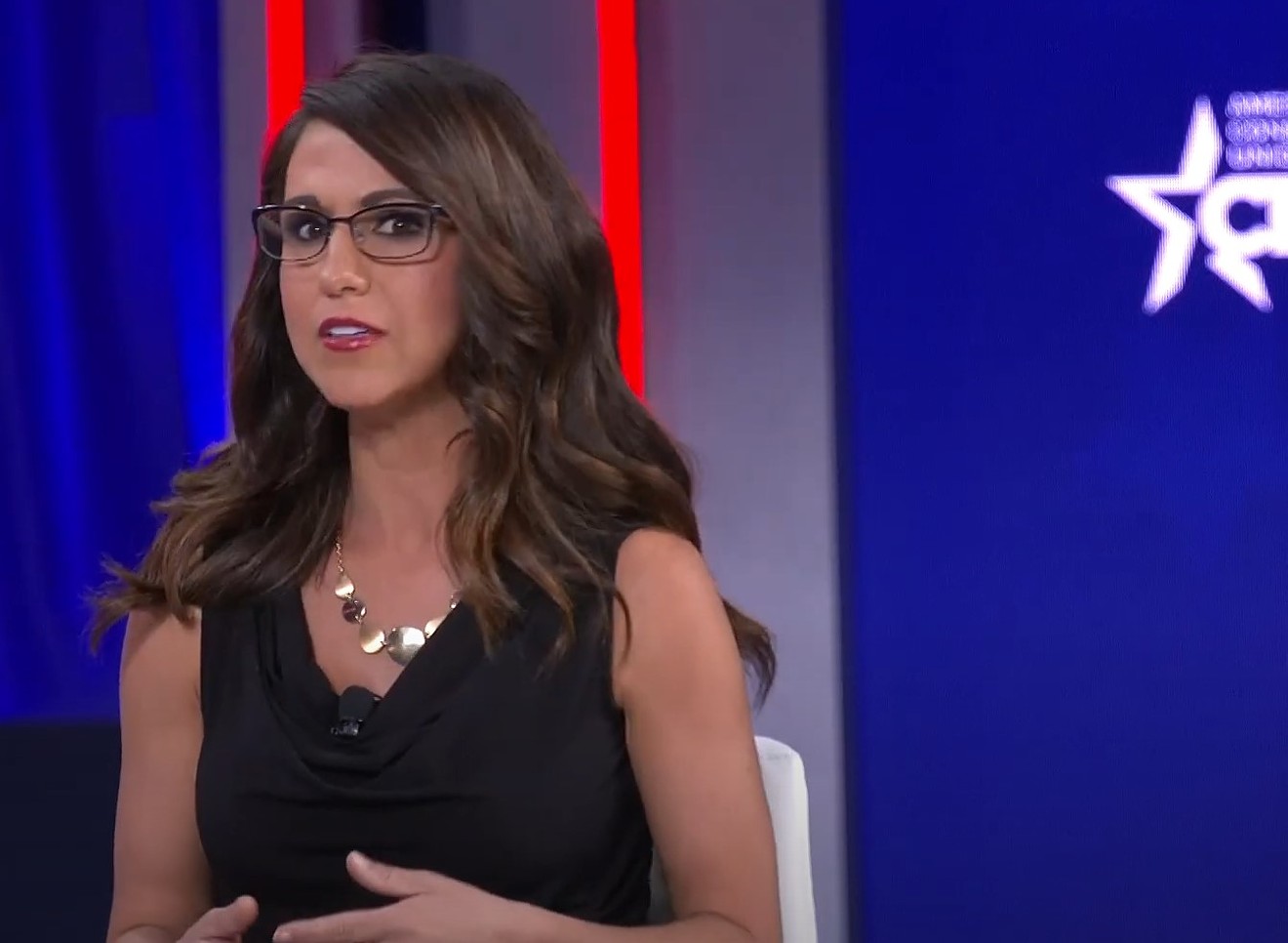 Boebert at CPAC 2021, the "Gunshine State" of Florida. That's Dana Loesch's joke, not mine. YouTube
U.S. Representative Lauren Boebert isn’t a headliner at the CPAC Texas Convention being held through August 7 — not that you can tell from looking at the banner ad emblazoned across the top of the Conservative Political Action Conference event web page. From the selection of head shots collected there, it seems like Boebert is one of the five most important guests, along with Donald Trump, Sean Hannity, Senator Ted Cruz and North Carolina Lieutenant Governor Mark Robinson.

Trump, Hannity and Cruz all make a tragic sort of sense: the disgraced con man and former president who poses for photos like a high school kid desperately wanting to be remembered as super cool; a faux newsman who shouts about the perils of fake news; and the eminently disliked junior senator from Texas who at this point is a live-action editorial cartoon about himself.

Hannity has a little half-smile, which makes him half-clown. Generous.
Twitter
Boebert and Robinson? They’re there for a little diversity, sure. They're the only two of the five smiling, because they're the clowns, eager to fluff the crowd and spew some vile invective in the name of red-meat extremism. Robinson said some pretty awful stuff at CPAC Florida earlier this year, including that “the real virus is Democrats,” that “life means nothing to those folks on the left,” and that President Joe Biden is an “incontinent nitwit.” And then he said something about how Democrats were teaching Blacks and whites to “despise each other.” (COVID is real, Robinson, but in terms of politics? The real virus terrorizing America is cognitive dissonance.)

Anyone else suddenly want some chicken?
Twitter
And Boebert is up top, despite there being several other conservative notables who might draw a little more national attention: Glenn Beck, the wishy-washy evil twin of Colonel Sanders; Assistant Wrestling Coach Unconcerned with Sexual Assault Jim Jordan; even Texas Governor Greg Abbott, who’s up for re-election against a surging Beto O’Rourke this fall. The list of minor celebrities known for terrible things goes on: Steve “I look like I’m ten months into my eventual prison sentence already” Bannon; Matt “I can’t believe I’m not in prison yet” Gaetz; Papa “I give pizza a bad name” John; Mike “My pillows are stuffed with anger and deception” Lindell; Devin “Hey, remember me?” Nunes. Even Colorado’s own Ken “I’m just happy Lauren Boebert makes me look rational” Buck will be in attendance.

The most telling guest at CPAC Texas 2022 — even bigger news than Trump, whose lack of integrity and desire only for grift is already well established — is Hungarian Prime Minister Viktor Orban. Here’s a guy whose authoritarian moves have alienated him from the rest of Europe and whose July 23 speech was so repugnant that erstwhile ally Zsuzsanna Hegedus described it as “a purely Nazi diatribe worth of Joseph Goebbels.” CPAC will welcome this man with open arms, just as Trump did at one of his golf resorts earlier this week. It's official: Today's GOP has moved from just flirting with authoritarianism to offering a reach-around with an actual dictator who's following every lesson the Nazi regime established in the 1930s.

But Boebert has been lying a bit low over the past few months, at least on the Boebert scale. She won the Republican primary against challenger Don Coram, whose attempt to topple her gun-shrine house of cards was too little, too late. Aside from the tone-deaf illogic of her ridiculous “Shall Not Be Infringed” bill, she’s been busy sending out self-congratulatory press releases of dubious achievements, prepping for the November elections, trying to keep her foot out of her mouth and dealing with some unexpected blowback from her vitriol.

First came the attacks from American Muckrakers PAC and its leader David Wheeler, who claims to have uncovered a lot of damning stuff. While Boebert came out swinging, claiming that they were all lies and that she’d started legal action, Wheeler has not been served any papers, according to fireBoebert.com, and the one action that was filed in the Colorado courts was dismissed and closed by the judge. Wheeler and American Muckrakers PAC are currently raising funds for a defamation case against Boebert.

And then came the news that Shooters Grill, the restaurant that got Boebert on Fox News in the first place and eventually led to her career strutting around Washington, D.C., as though she were accomplishing something, was forced to close. The owners of the building refused to renew her lease, citing a “moral imperative” that arose not long after the tragic shooting at Robb Elementary in Uvalde, Texas.

So it will be interesting to hear what Boebert has to talk about this weekend at CPAC. A little over a year ago, when CPAC Florida was held in February 2021, we imagined a short list of potential speech topics for 2022. Will any of them come to pass? Probably not, but in keeping with tradition, here are ten titles we’d love to hear her address. Consider it a recap of the CPAC that won’t be…but really ought to be:

Still pinned to the top of Boebert's Twitter feed after nine months. That's long enough for a whole forced birth!
Twitter
"Other Things I Propose Shall Not Be Infringed: Disinformation and My Incredibly Narrow Idea of Christianity"

"Why Every Real American Should Have the Right to Vote, and How Two-Thirds of the Country Are Not Real Americans"

"Writing Things on Your Ass for Attention: Trump Women Speak Out!"

"Quit Your Day Job: How Political Grift Can Make Your Small Business Unnecessary"

"The Original Intent of the Constitution and Why I, Like All Women, Am Not Technically a Person"

"Today Is 1776: Totally Not Collusion to Insurrection"
KEEP WESTWORD FREE... Since we started Westword, it has been defined as the free, independent voice of Denver, and we'd like to keep it that way. With local media under siege, it's more important than ever for us to rally support behind funding our local journalism. You can help by participating in our "I Support" program, allowing us to keep offering readers access to our incisive coverage of local news, food and culture with no paywalls.
Make a one-time donation today for as little as $1.