Boebert Watch: Another Misfire With "Shall Not Be Infringed Act"

Oh, my God, Becky, look at those guns. YouTube

Lauren Boebert’s latest cry for attention is as poorly edited as it is tone-deaf: On July 14, she introduced a bill called the “Shall Not Be Infringed Act,” which intends to undo the “Bipartisan Safer Communities Act” that President Joe Biden recently signed into law as a step toward addressing the epidemic of gun violence in America. Boebert’s announcement of her own proposal accuses those Republicans who supported even that minor move toward reasonable gun law as RINOs who “failved [sic] to defend the Second Amendment.”

Yes, it’s just a typo. One of many from Boebert and her people, including “Imeach Biden” and “Micky Mouse” and “Ameirca.” It’s hard to spell when you’re busy shooting from your hip, and speaking from ignorance, to boot. But still, taking time to get things right is something we should be able to expect from our political leaders. 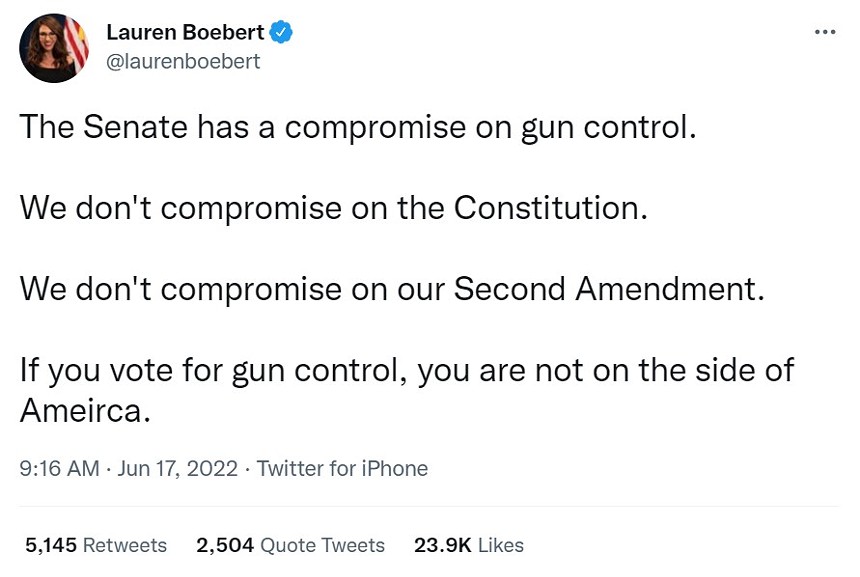 Twitter
More important, this shot across the bow of the USS Rational Government — a ship that Mitch McConnell has had in dry-dock for almost a decade now — comes at a time when America (note the spelling, Congresswoman) is still reeling from recent shootings, and only a day after new footage was leaked of the tragic Uvalde, Texas, massacre that took the lives of nineteen elementary school children and two teachers. They were so mutilated by the assault rifle and ammunition used that some could only be identified through dental records. One victim was only identifiable by the tiny green sneakers she was wearing when she was murdered.

The right to this sort of act is what Lauren Boebert believes shall “Not Be Infringed.” Absolutism is a demanding philosophy. It ignores nuance; in many ways, it ignores the human condition. It invites tragedy, over and over again, in the service of a belief that does not care for anything but itself, not even those that espouse it. It doesn’t care for teachers and students in danger. It doesn’t care for little girls in little lime-popsicle Converse sneakers.

Specifically, the bill doesn’t say much. It just proposes a repeal of a bipartisan act that it defines as a “gun grab” (it’s not), falsely bipartisan (it wasn’t), in opposition to the beliefs of the majority of Americans (quite the opposite), and unconstitutional (nope, but with this Supreme Court, stupid arguments seem to be super popular). Curiously, the NRA has so far remained silent on the proposal, though lesser organizations such as the Gun Owners of America (which proudly bills itself as “the only no-compromise gun lobby”) and the National Association for Gun Rights (another far-right extremist organization, this one headquartered right here in Colorado) have given their own bloody thumbs-up.

What the bill does not mention is the tragedy in Uvalde. It doesn’t directly defend the killing of children as a fair price to pay for letting the undeveloped brain of an eighteen-year-old decide to purchase a firearm like the DDM4 Rifle, a military-style AR-15 type of weapon modeled after the M4 Carbine. It doesn’t directly excuse the fact that the shooter was able to buy ridiculously powerful ammo, or a holographic sight designed for the specific purpose of shooting up-close targets more quickly and efficiently. To rack up a body count, in other words. These things are not in the “Shall Not Be Infringed Act.” Not overtly.

Boebert: selfie queen and CD3 representative.
YouTube
What’s both reassuring and troublesome is that Boebert’s new bill is almost certainly going nowhere. It exists just for optics. It’s another tale told by an idiot, full of sound and fury, signifying nothing. In that, it's easy for people to shrug off, to choose to ignore it and the disgusting and damaging implications the system of beliefs behind it implies about our national conversation. But it’s important that America writ large sees these optics and recognizes them for what they are: pleas for support from extremists who don’t represent the majority of the country, or our collective best interests as a nation.

To be clear — and for the record, so America knows exactly who supports a bill like this in a time like this — Boebert is not alone. Twenty-eight congressional members joined her in introducing the Shall Not Be Infringed Act, and they deserve all the due recognition such a thing should bring. They include Elise Stefanik, Andrew Clyde, Jody Hice, Mary Miller, Matt Rosendale, Dan Bishop, Warren Davidson, Jeff Duncan, Louie Gohmert, Bob Good, Randy Weber, Jeff Van Drew, Scott Perry, Adrian Smith, Alex Mooney, Brian Babin, Ben Cline, Andy Biggs, Chip Roy, Michael Cloud, Troy Nehls, Ralph Norman, Madison Cawthorn, Paul Gosar, Vicky Hartzler, Ronny Jackson, Thomas Massie and, yes, Colorado's Doug Lamborn. A good list of politicians for America to file under “Part of the Problem, Not the Solution.”

Lauren Boebert has trapped herself in this gun shrine of her own making. She was elected on guns. She’s governed on guns, along with fame-seeking and profit-making. She’s running on guns again, now, with this very empty, callow, ignorant bill. Maybe it’ll take guns —America’s disenchantment with the absolutist argument for their unfettered possession, more specifically—to put Boebert right back where she belongs: as a failved restaurateur on the Western Slope.
KEEP WESTWORD FREE... Since we started Westword, it has been defined as the free, independent voice of Denver, and we'd like to keep it that way. With local media under siege, it's more important than ever for us to rally support behind funding our local journalism. You can help by participating in our "I Support" program, allowing us to keep offering readers access to our incisive coverage of local news, food and culture with no paywalls.
Make a one-time donation today for as little as $1.