Broncos Country Tweets Angrier Than Ever Even After Win Over Washington 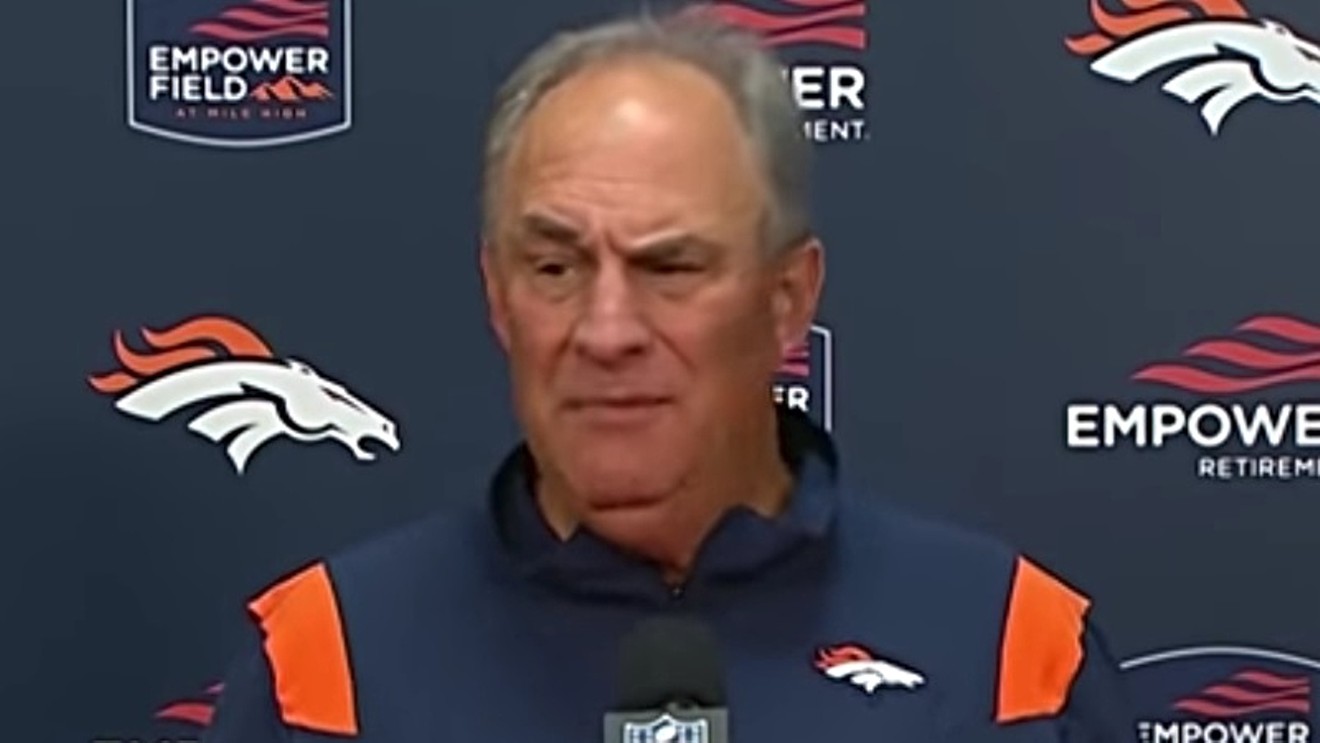 Broncos head coach Vic Fangio looks more confused about the team's latest victory than fans seem to be. Denver Broncos via YouTube
How mad are the citizens of Broncos Country about the sorry state of their favorite NFL team? So mad that even after Denver broke a four-game losing streak by defeating the Washington Football Team 17-10 on Halloween, scads of them responded by anger-tweeting about the squad's deficiencies rather than celebrating the victory.

And who can blame them? Even the Broncos' official Twitter account struck an apologetic tone after the final whistle blew, pairing a graphic dominated by the final score with the phrase "A win's a win!"

Maybe so — but this one felt like the opposite of a triumph. Denver had to scratch and claw to defeat the WFT, helmed by a second-string quarterback, Taylor Heinicke, who will only get into the Hall of Fame if he buys a ticket. The Teddy Bridgewater-led offense was about as explosive as a sparkler left out in the rain, and the defense allowed Heinicke to tie the game in the third quarter by way of a ten-play, 94-play drive that saw the squad both bending and breaking. If it weren't for two blocked field goals courtesy of the Broncos' much-maligned special teams unit, the game could easily have gone the other way.

Moreover, the Broncos' injury situation, which was already so bad that fans can be forgiven for wondering if the training staff has a collective case of Munchausen by Proxy, got even worse after defensive back Bryce Callahan and left tackle Garett "Holds" Bolles limped off the field. At this point, the next "Scam Likely" phone call you receive may actually be head coach Vic Fangio wondering if you're available to suit up against the Dallas Cowboys next Sunday, November 7.

The Cowboys could also have a backup quarterback under center on that date: Starter Dak Prescott was on the sidelines watching as his fill-in, the unheralded Cooper Rush, managed to help Dallas defeat the Minnesota Vikings 20-16 on Sunday Night Football; his return to action remains uncertain. But plenty of Broncos fans still calling for the head of Fangio, offensive coordinator Pat Shurmur and anyone else responsible for the depressing decline of a once-great franchise are expecting disaster no matter who's calling signals for America's Team.

There are exceptions, however. Nineteen of the twenty tweets below vary from sad to livid, but the last one sees the glass as half full.

I love how even Broncos Twitter is like, "Yeah we suck, but at least we're only one of the worst teams in the league."

#Broncos suck. It will be a bloodbath even if Dallas puts the waterboy in at QB. #Broncos can't beat a team with an interim head coach, backup QB, or nearly a no name team. They were trying their hardest to find a way to lose today, and they screwed that up. I feel like aLionsFan

Nope! It only confirmed what ever game has confirmed so far, or offense with Teddy sucks!!

BAD: the problem is that our coaches suck. Our injuries mount because Greek has retired. Our fanbase seems to have been bitten by apathy and it's all coming down to a .500 season. AAAARGH!

Really bad man. Just went to the neighbors for Halloween drinks, everybody was “hey, the Broncos won right?!” I literally have no enthusiasm for this team and it’s coaches, feel like we’re frauds playing last place schedule drawing worst division in the NFC. And we still suck.

if your nfl team lost to the Denver Broncos this season then they must really suck!

This stupid win guarantee’s the staff stays….tired of the ineptitude of this coach staff!! They suck….

2 awful teams. 1 sucked less than the other. Yet the Broncos wanted to suck more in the end.

Fire the coaching staff. Release Teddy. Broncos fans have had enough. What an F'n joke.

This team is a joke and an embarrassment. Especially on defense. How do you even tweet that.

I’m not even mad watching the broncos anymore. This coaching staff is a joke

Every side of the ball was awful. Least one is the defense that saved the game in the end. But man, Washington was moving the ball. They were getting stops. They literally had a shot till the end. Broncos needs major changes. A lot.

The Broncos have games against the Lions and Eagles at home, which theoretically they could win. The Eagles game is probably a toss-up.

Does anyone else see another potential win on the schedule? I sure don't. Don't let the .500 record fool you. This is still an awful team.

Worse than awful… at least we got a W… barely #broncos https://t.co/FYr2cFK8jU

Broncos win, but wow…. that was an awful game….

So Happy to see that the @Broncos defeated @WashingtonNFL 17-10 today, Great Win Boys Finally Back in the Win column, Now time to build off that W #BroncosCountry pic.twitter.com/TlywnNuhF5