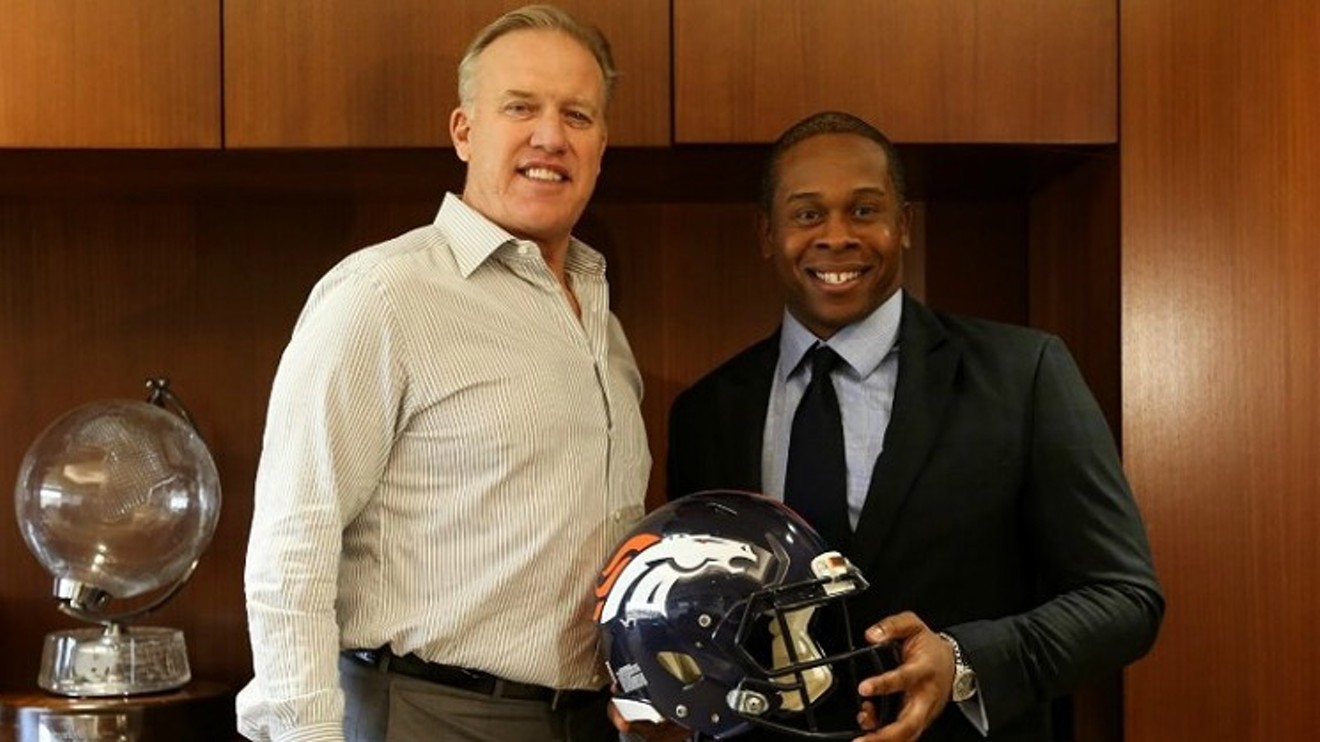 The photo tweeted out by John Elway after the 2017 hiring of Vance Joseph as head coach of the Denver Broncos. Twitter
Thanks to a three-game winning streak in the lead-up to yesterday's contest, most Denver Broncos fans had given a rest to calls for the head of embattled head coach Vance Joseph. But after a 20-14 loss to the woeful San Francisco 49ers, who'd racked up a 2-10 record prior to December 9, such suggestions have turned into a full-throated cry that's echoing across the Twitter-verse.

The Broncos knew that their best chance of making the playoffs after climbing back to .500 was to run the table and win all of their remaining games. And even though the squad saw two of its best players, Emmanuel Sanders and Chris Harris Jr., shelved by injuries over the past week or so, the 49ers were in even worse shape on that front; iffy second-string quarterback Nick Mullens was pushed into the spotlight after starting quarterback Jimmy Garoppolo tore his ACL earlier in the season.

Nonetheless, the team came out of the locker room flatter than a dead man's EKG, going scoreless in the first half while allowing undistinguished tight end George Kittle to look like a player on a Hall of Fame trajectory, particularly on an 85-yard touchdown pass in the second quarter. And while the Broncos scored two second-half TDs, they were unable to get a stop on the 49ers in the waning minutes of the fourth quarter, thereby robbing themselves of a chance at a victory that would have greatly enhanced their post-season chances in light of losses by the Baltimore Ravens and Pittsburgh Steelers, a pair of potential wild-card competitors.

The anemic play of pretty much everyone wearing a Denver logo, including quarterback Case Keenum (he threw for under 200 yards despite 42 attempts) and every running back on the roster (Royce Freeman led the way with 36 yards), made Joseph a logical scapegoat for the loss. And Broncos loyalists on Twitter quickly took aim and repeated their demand that team boss John Elway fire him immediately, if not sooner.

Among those heard from in our roundup below are folks at the largest of multiple Fire Vance Joseph accounts, the hilarious Faux Vance Joseph and a man who says his mom's yuletide wish is that VJ get his walking papers.