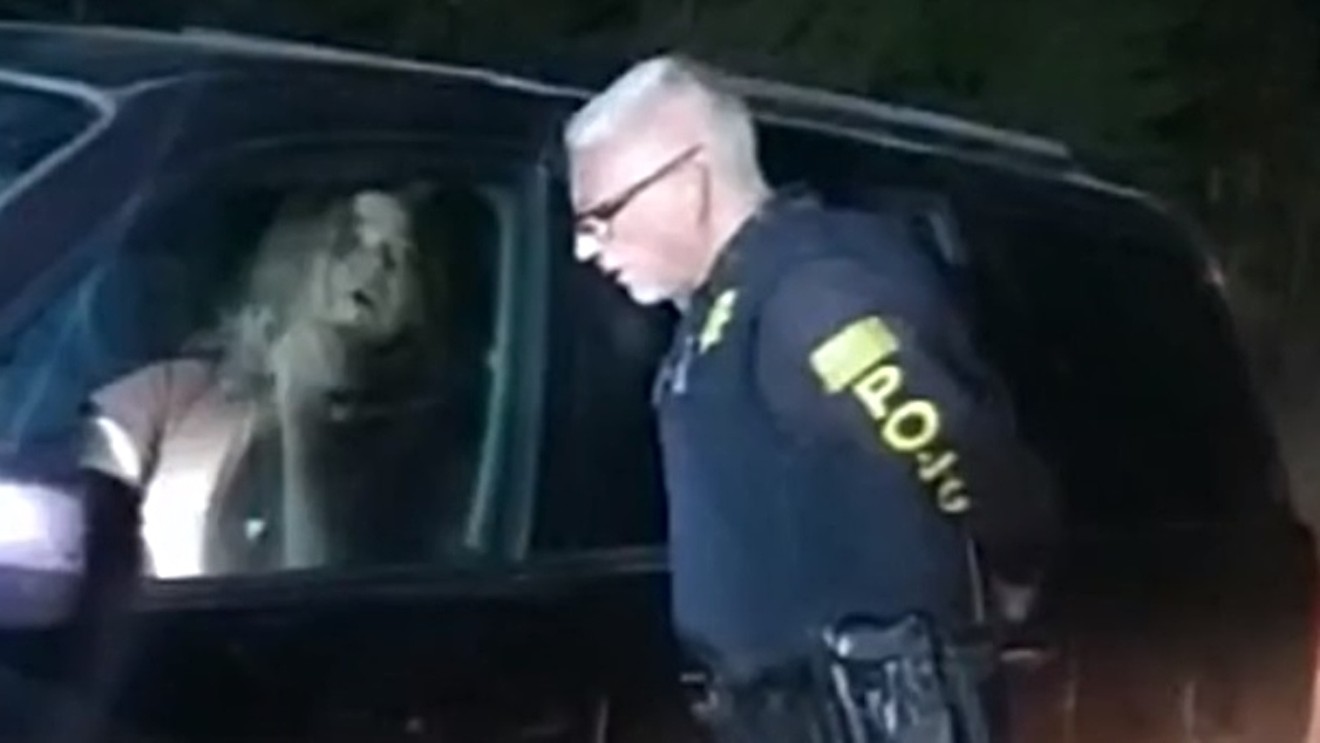 A screen capture from June body-camera footage shows Christian Glass chatting casually with a law enforcer shortly before he was shot to deeath. Rathod Mohamedbhai LLC via Vimeo
On October 5, in the wake of what Clear Creek County Sheriff Rick Albers refers to as "the June 2022 incident" — a deputy's fatal shooting of Christian Glass, a 22-year-old who sometimes struggled with mental health — he revealed that his office is collaborating with the area's elected commissioners to develop a crisis-response team.

The idea of launching such a unit isn't new. As pointed out by Rathod Mohamedbhai LLC, the Denver-based law firm that represents Glass's family and is currently preparing a wrongful-death lawsuit, a grand jury that looked into the 2020 killing by two deputies of 57-year-old Darrin Patterson, who suffered from mental illness, had suggested that Clear Creek County adopt such a program in order to avoid future episodes.

The original Clear Creek County Sheriff's Office release about the events leading up to Glass's death is matter-of-fact. It states that at about 11:21 p.m. on June 10, the office's communication center received a "motorist assist" call from an individual on the 600 block of Main Street in Silver Plume. Upon their arrival, deputies found "an adult white male" (Glass hadn't been identified yet) who "appeared to have been involved in an accident" and "immediately became argumentative and uncooperative with the deputies and had armed himself with a knife."

When Glass didn't quickly leave the vehicle, additional law enforcement officers from multiple agencies — police departments in Idaho Springs and Georgetown, as well as the Colorado State Patrol and the Colorado Division of Gaming — were called to the scene "and for over an hour tried to bring the situation to a peaceful resolution," the release continues. "Deputies were able to break out the car windows and remove one knife," but because Glass was still in possession of a second knife and a rock, they subsequently "deployed less-lethal bean bags and Taser with negative results." Finally, Glass was shot after he allegedly "tried to stab an officer." He didn't survive his wounds.

The account offered by attorney Siddhartha Rathod during an interview with Westword last month had little in common with the official version. 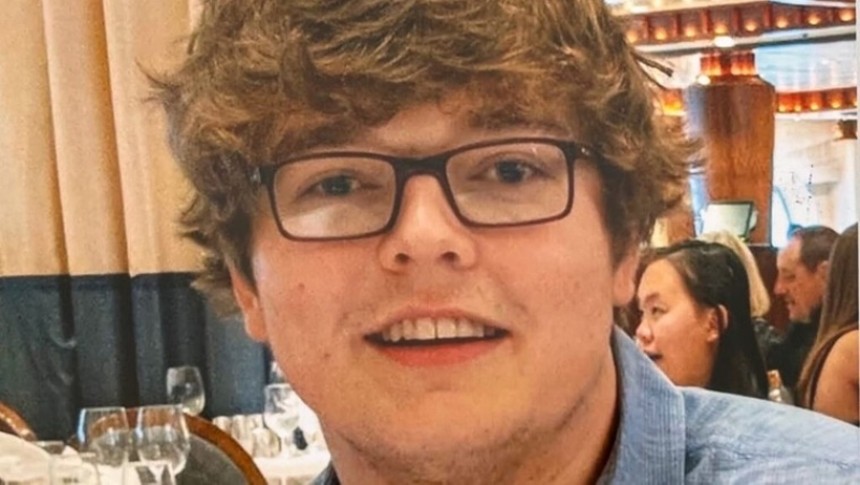 A portrait of the late Christian Glass.
Rathod Mohamedbhai LLC
"Christian called 911 for help after his car got stuck on some rocks as he attempted to do a U-turn — and he was clearly having a crisis," he noted. "Clear Creek Sheriff's Office deputies arrived and were almost immediately aggressive with him. Within less than a minute and thirty seconds of being on the scene, they were threatening to pull him out of the car. Within three minutes of being on the scene, they were threatening to break out his windows. And within just a few minutes of being there, they had their guns drawn on Christian."

As for the knives, "Christian had self-identified in the 911 call that he had them," Rathod continued. "When the operator asked, 'Do you have any weapons,' he said, 'I have two knives, a hammer and a rubber mallet' — geology tools he used for finding rocks. He said, 'I'll throw them out of the window if that will make the officers feel safe.' And when the officers arrived, he had his hands up and waved at the officers. He offered to throw the weapons out of the car and they started screaming at him and said, 'No.'"

Body-camera videos from the scene show that "Christian was scared" by their reaction, Rathod said. "He was terrified and in crisis. The first time he picks up a knife, the officers are standing outside the window, and as they draw their guns, he throws it across the car and covers his mouth in fear. And Christian had committed no crime. There was no reason to continue the contact, and if the officers were afraid of a person holding a legal knife in a car with the windows fully up, they should have done what every police expert tells them to do: seek cover, distance and time. You don't stand right next to the threat, but they did, which just demonstrates that there really wasn't a threat."

After a deputy broke out one of the vehicle's windows, Rathod continued, "Christian responded by picking up the knife — and they shot him six times with bean bags, which is the equivalent of being repeatedly punched as hard as humanly possible. They blew out the back window and tased him several times, causing him to slash with the knife in pain and panic — and that's when the officer shot five times and killed him."

Continue to see a compilation of body-camera footage:

While Glass was not familiar to the law enforcement officers,  Patterson was well known to the Idaho Springs police officers who responded when he dialed 911 on the afternoon of May 9, 2020. Such calls were so frequent that a cop on the scene said Patterson would be sent to "the nut house" if they continued, the grand jury report states.

That night, another Idaho Springs officer saw Patterson driving erratically, and while she was able to isolate him in a parking lot, where he stopped, he refused to leave the vehicle. She then radioed for assistance, and Clear Creek deputies Nicholas Dibiase and Kyle Gould were dispatched. Upon their arrival, Patterson took off in his car and they gave chase. Patterson eventually set a blanket in the back of the vehicle ablaze before grabbing a handgun and allegedly pointing it in the direction of the deputies. Their reaction was to squeeze off thirty shots at Patterson; six struck him, and he was declared dead at the scene.

The presence of the gun made all the difference to the grand jurors, whose report, issued that August, concluded: "Deputies Dibiase and Gould acted appropriately and properly under the circumstances. ... They were justified in using the force which was used when they reasonably believed that Patterson, when armed with a fully loaded handgun with a chambered round, intended to shoot Gould during the attempt to effectuate his arrest and stop the flight of Patterson."

However, jurors also saw ways the situation could have been handled better, as outlined in the following passage:


The Grand Jury recognizes there exists insufficient resources and facilities available to address individuals who suffer from various types of mental illness in the Clear Creek County community.... Mental health resources should be made more available in the community including, funding by Clear Creek County and the municipalities within the County, to address the mental health issues which afflict community members.

The Grand Jury encourages the municipalities and County to address these issues, enabling law enforcement officers with resources that do not currently exist, in hopes of preventing another tragedy like this from occurring. In the near term, the Grand Jury recommends to local governments in Clear Creek County, that they identify mental health resources, whether in or outside the county, that can immediately be made available to law enforcement to assist those individuals in mental health crisis.

Sheriff Albers's announcement confirms that this concept is moving forward, then offers an update on the Glass investigation:


It is with respect for our community that we, the Clear Creek County Sheriff's Office, inform you of our cooperation and collaboration with the Clear Creek County Commissioners in the research of a development of a Crisis Response Team for our county. We understand that there is a multitude of information pertaining to the June 2022 incident. This incident has been a tragedy for everyone. It is our intention to maintain the integrity and transparency of the investigation, and by doing that, we must be impartial. With that, our obligation is and was to turn the investigation to an independent outside agency, the CBI (Colorado Bureau of Investigation). In turn, the CBI gives its investigation to the DA (District Attorney). It is my understanding that after review, the DA will decide what further action is appropriate, whether to issue a report, present the case to a grand jury or further investigation. While this matter is pending with the CBI and DA, it is not appropriate for me to comment about specifics because the investigation and next steps are being handled by CBI and the DA. My office will continue to cooperate in any way we can.

These pledges aren't nearly enough for the attorneys at Rathod Mohamedbhai. "Not only did the Clear Creek County Sheriff’s Office ignore the grand jury’s well-founded recommendations, but over the last four months since Christian’s death, the Sheriff’s Office has misled the public about the facts of Christian’s murder and repeatedly condoned, justified and exonerated their deputies’ conduct," the firm responded. "None of the deputies involved in Christian’s murder have been disciplined, and the Clear Creek County Sheriff’s Office deputy who shot and killed Christian is still on the street in uniform. The time for 'research and development' has passed, and the nation must demand action and justice for Christian Glass."

Click to read the grand jury report in the Darrin Patterson shooting.
KEEP WESTWORD FREE... Since we started Westword, it has been defined as the free, independent voice of Denver, and we'd like to keep it that way. With local media under siege, it's more important than ever for us to rally support behind funding our local journalism. You can help by participating in our "I Support" program, allowing us to keep offering readers access to our incisive coverage of local news, food and culture with no paywalls.
Make a one-time donation today for as little as $1.