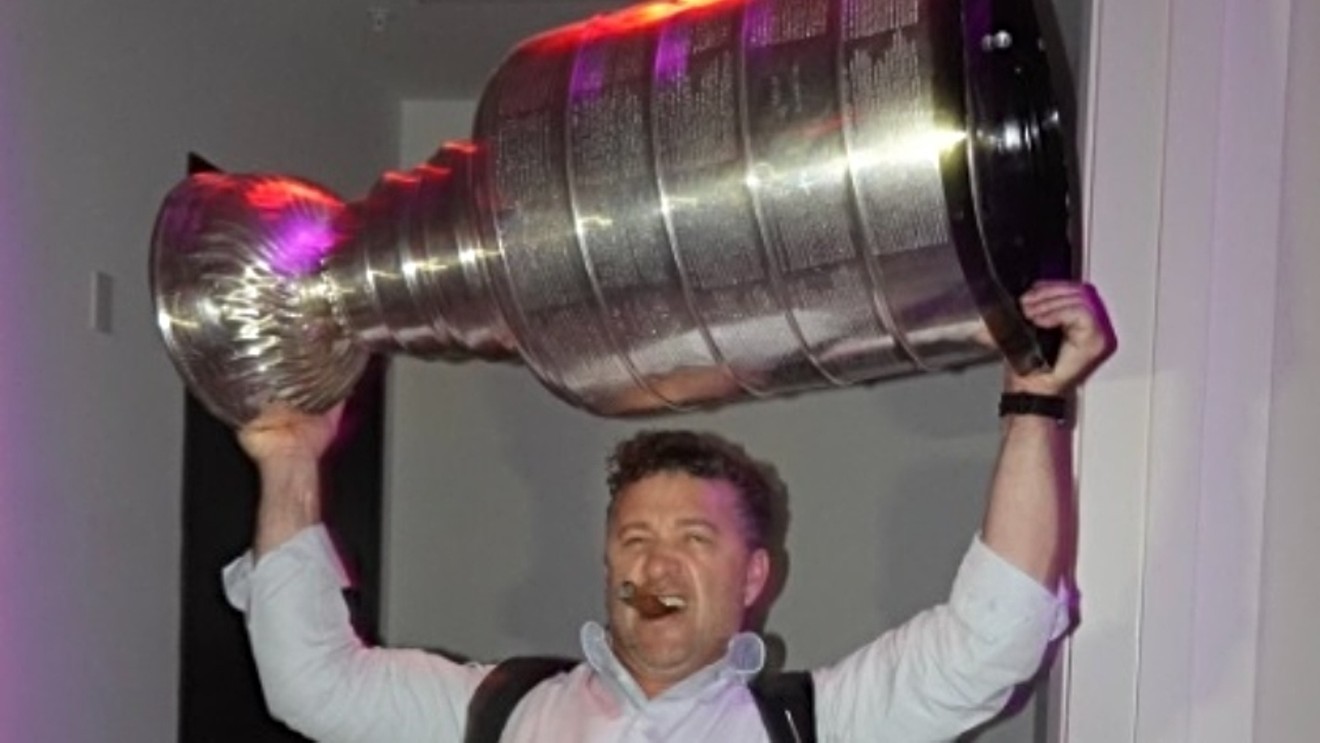 The caption Mike Chambers chose when he shared this photo on Twitter reads: "Probably the most memorable experience of my career." @MikeChambers
At 7:30 p.m. tonight, October 12, the Colorado Avalanche are scheduled to start defending their Stanley Cup victory with a match-up against the Chicago Blackhawks at Ball Arena. But Mike Chambers, longtime scribe on the Avs beat for the Denver Post, won't be covering the game. He left the paper just over a month ago, shortly after he posted a photo on social media showing him hoisting the Cup — an act many hockey purists considered a major faux pas.

He adds: "I want to take a break from journalism right now and the industry in general."

Chambers's bio remains on the Post website; it notes that the Colorado native "wrote his first story for the paper as a freelancer in 1994 and joined the staff in 2000 as a general-assignment writer mostly covering the University of Denver hockey team. Mike graduated from Cherry Creek High School and has a journalism degree from the University of Northern Colorado."

The opportunity to become the Post's top NHL specialist opened up in late 2014 after Adrian Dater was fired for using profane language on Twitter; Dater, who admitted that he had been dealing with substance-abuse issues at the time, went on to found Colorado Hockey Now, an excellent hockey-centric news website. Over the years that followed, Chambers earned a reputation as a knowledgeable and passionate Avs chronicler — which made the tempest over the Cup pic such an anomaly.

There's a longstanding tradition that only triumphant players and other franchise personnel have the right to lift the Cup as Chambers did — and in a June 28 article that made a splash nationally, Barrett Sports Media's Ian Casselberry argued that the resulting shot "looks less than professional" since it showed Chambers "acting as if he's part of the team and celebrating with the organization." And while acknowledging that sports is "meant to be fun," Casselberry contended that "those who cover a sports team every day don’t want to be perceived as a public relations arm of the organization."

In response, Chambers told Westword he'd only posed for the photo after Avalanche captain Gabriel Landeskog — whom he's known since 2011, when Landy joined the squad at age eighteen — handed him the Cup and encouraged him to raise it high. And while this explanation didn't placate everyone, the criticism ebbed in the weeks that followed.

Then, on August 25, Chambers tweeted, "I'm calling it a career nearly 27 years after filing my first story at the DP & working 22 years on staff. It's time. Hockey is still my thing but the daily grind of the Avalanche beat is too taxing. I must address mental health before committing to another Cup-or-bust season.... The next chapter includes working on my golf game & flying out to West Point to visit my son most weekends. #GoArmyBeatNavy. I will be back writing hockey if the right opportunity emerges. Grateful/proud of the wonderful coaches/players/colleagues I have worked with. Ciao 4 now."

This move left the Post in need of a hockey writer, with just weeks before the beginning of the Avs' 2022-2023 campaign. A want ad published on September 13 described the ideal candidate as someone who "can write stories sophisticated enough for the most ardent hockey fans and also produce in-depth enterprise stories that engage readers of all interests. The reporter must be a great teammate, easy to work alongside and able to adapt when necessary. A background covering hockey is required, preferably at the professional level." The hourly pay rate was listed as "$22.45-$33.27," with "exact compensation" to be "determined by skills and experience."

In the lead-up to the season, staffers such as Sean Keeler and Joe Nguyen have been penning Avs stories for the Post. However, sports editor Scott Monserud confirms that a new hockey writer has been hired and is expected in the office next week.

For his part, Chambers says, "I'm semi-retired and working part-time at a golf course." Still, he hasn't closed the door entirely on journalism. "I might get back into it at some point, but not as a major sports-beat writer," he notes. "That lifestyle is too taxing — far too many hours and far too little pay."

So far, he's regret-free. "I feel good about my decision to step away and take a break, and right now, I have no plans on getting back into the industry," he says. "But I suspect that at some point, I'll want to write regularly again."

Chambers won't be at Ball Arena tonight, though. "I have no plans to go to the season opener," he adds. "I anticipate I'll attend a game or two, but I don't have tickets or anything like that."
KEEP WESTWORD FREE... Since we started Westword, it has been defined as the free, independent voice of Denver, and we'd like to keep it that way. With local media under siege, it's more important than ever for us to rally support behind funding our local journalism. You can help by participating in our "I Support" program, allowing us to keep offering readers access to our incisive coverage of local news, food and culture with no paywalls.
Make a one-time donation today for as little as $1.