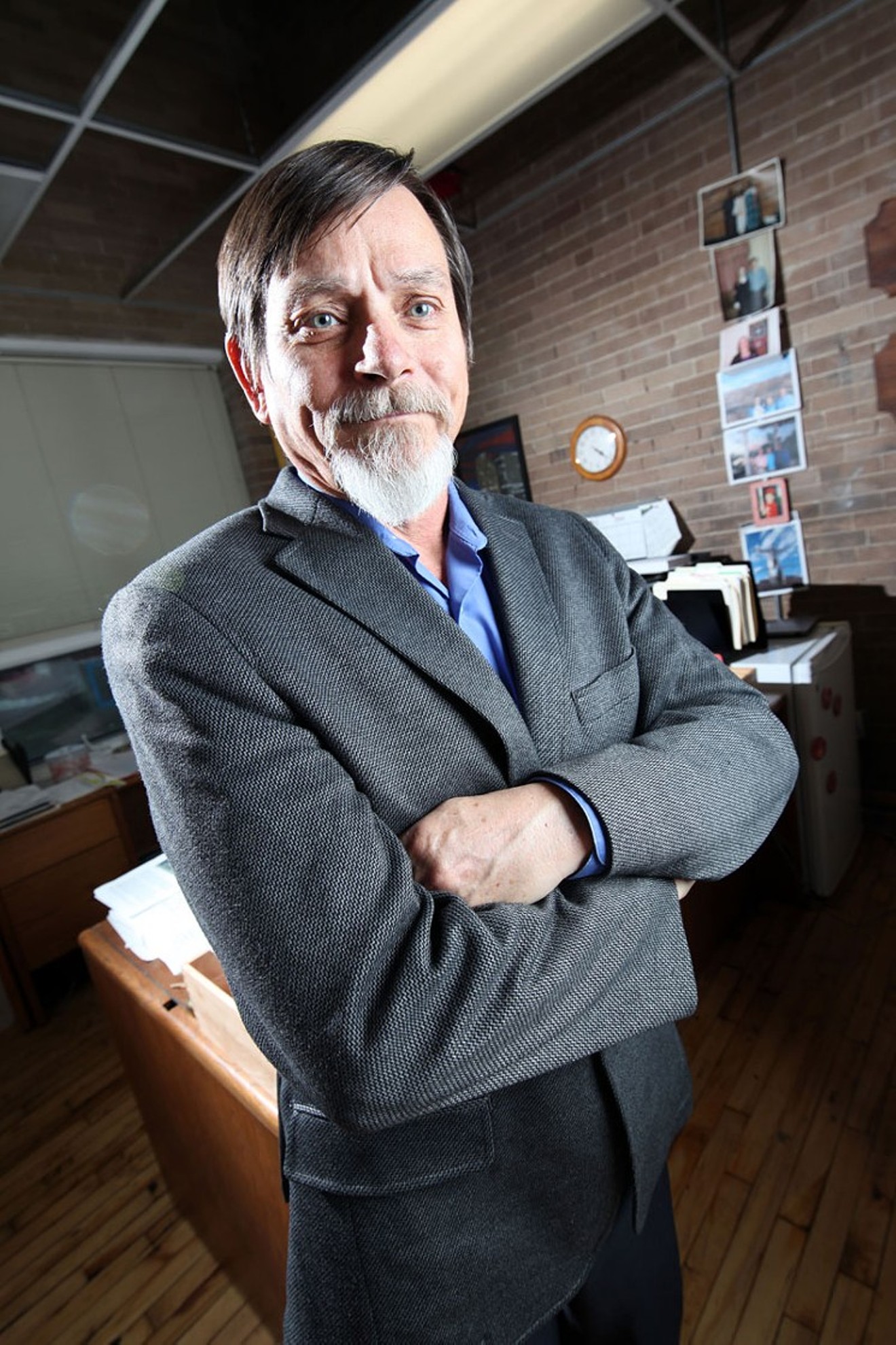 John Parvensky has headed the Colorado Coalition for the Homeless since 1985. Anthony Camera
John Parvensky, longtime president and CEO of the Colorado Coalition for the Homeless, plans to retire later this year. "For over 36 years, I've had the opportunity to work with some of the finest people who are committed and devoted to helping people when they're at their worst crisis and helping them get back on their feet, get access to housing and health care, and help them turn their lives around," says Parvensky.

The 68-year-old Parvensky has been the head of the Colorado Coalition for the Homeless, which he calls "the leading homeless and healthcare nonprofit in the country in terms of size and impact," since the mid-1980s.

In 1984, fresh out of law school at the University of Pennsylvania, Parvensky moved to Denver and started helping nonprofits gain tax-exempt status.

That same year, then-Mayor Federico Peña convened a working group "in response to the growing incidence of homelessness that people were seeing on the streets," recalls Parvensky. The Colorado Coalition for the Homeless emerged from that group, with Parvensky taking over as the organization's leader in 1985. At the time, it had a staff of six with a budget of $100,000.

"We thought we would work ourselves out of a job within five years because we thought that homelessness was going to be a temporary phenomenon that was going to be created by the budget cuts during the Reagan years," says Parvensky. But the problem didn't end when President Ronald Reagan left office, and after another five years, the Coalition realized that it was in a long-term fight.

"I think after that ten-year mark, we recognized that the forces creating homelessness — the affordable-housing shortage, the crisis in health care, mental health and addictions, domestic violence, youth leaving foster care without the support that they needed — were greater than what we were able to do on a temporary basis," Parvensky says.

Under Parvensky's leadership, two of the Coalition's first projects were establishing an emergency shelter and a medical clinic for people experiencing homelessness, which today is the Stout Street Health Center, And the organization also began buying housing and building more housing.

Early in his tenure, Parvensky says, the general perception in Denver was that homelessness resolution was charitable work, often best handled by religious organizations. Over time, however, perceptions shifted, with more Denver residents and policymakers recognizing that local government needs to play a role, too.

"I think, probably starting with Mayor Hickenlooper with the Ten Year Plan to End Homelessness, [there was] a recognition that it wasn't just for the religious community or the nonprofits to address homelessness, that it was something that the community had to come together on. There was some great planning done, but the resources were never invested on a sufficient level," Parvensky says.

"I think COVID has helped shine a light on the particular vulnerability of people who are homeless or hanging by their fingernails," Parvensky says.

The Coalition has grown massively as an organization since Parvensky started there. That staff of six has grown to 750 employees, and the operating budget from $100,000 to $100 million. Parvensky currently earns around $345,000 annually for his role heading the CCH.

He lists some of the key Coalition accomplishments as building twenty housing developments; administering 2,000 housing vouchers for local, state and federal governments; housing more than 4,500 individuals and families on a given night; and providing health care to 15,000 patients annually.

Another important success of the Colorado Coalition for the Homeless, working with the Mental Health Center of Denver, has been housing hundreds of individuals through the Denver Social Impact Bond program in a "housing first" approach, work that the Urban Institute referred to as a "remarkable success."

Still, even as his staff and budget have increased, so has homelessness, which bothers Parvensky.

"The only regret is that despite having done that, we just see more and more people who are falling through the cracks, losing their housing and ending up back on the streets and turning to us for help. We've fallen short in terms of bringing it to the scale necessary to deal with the crisis of homelessness here in Denver and throughout the state," Parvensky says, adding that he wishes he could see more involvement in homelessness resolution from cities outside of Denver.

Parvensky plans to stay in his current role for the next few months as the CCH board searches for his successor. After that, he's going to take a little time off before diving back into the work he's been doing for decades.

"I'd like to initially do some traveling," he says, "and then figure out how I can continue to make a difference in making Denver a better place to live, focusing on people who are the most marginalized and continuing to work for social justice, which has been my calling since the time I went to college."
KEEP WESTWORD FREE... Since we started Westword, it has been defined as the free, independent voice of Denver, and we'd like to keep it that way. With local media under siege, it's more important than ever for us to rally support behind funding our local journalism. You can help by participating in our "I Support" program, allowing us to keep offering readers access to our incisive coverage of local news, food and culture with no paywalls.
Make a one-time donation today for as little as $1.