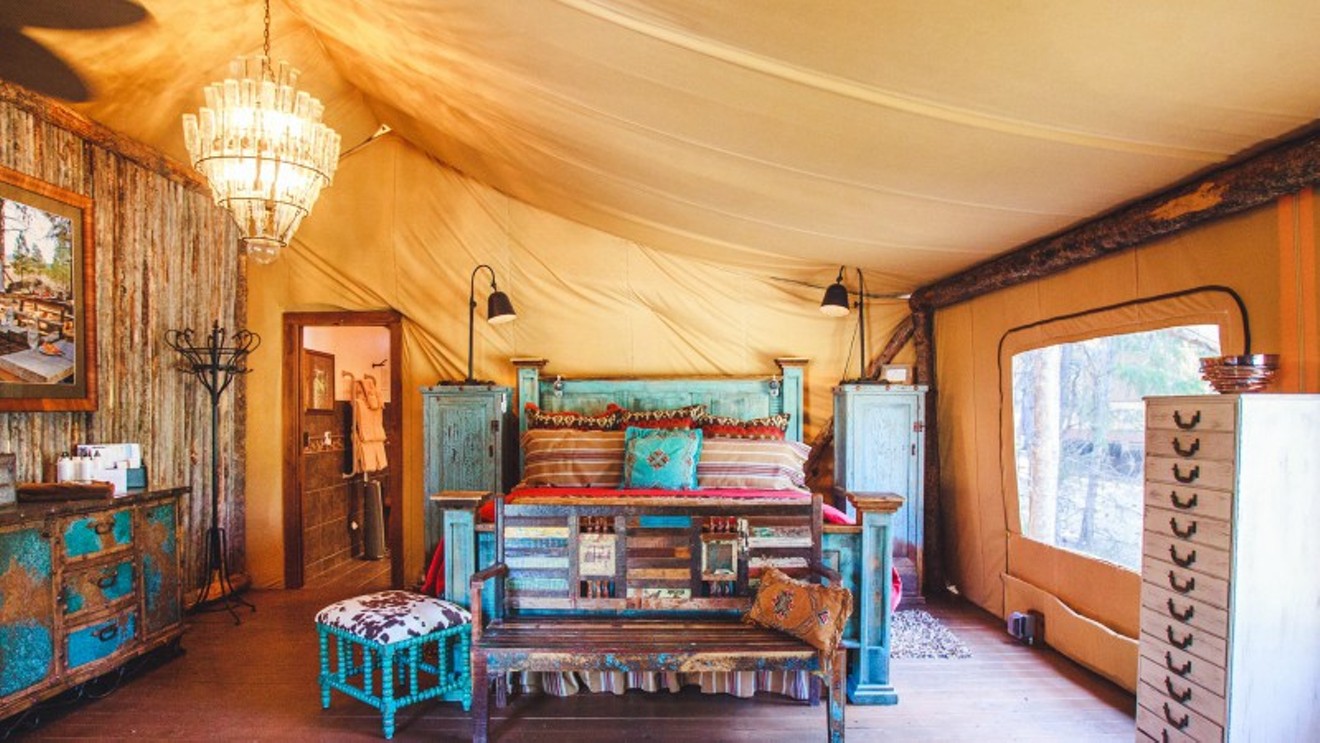 Inside a tent at The Resort at Paws Up, a Montana facility that's among the models for the Colorado project. Facebook
In recent years, glamping, a term for so-called "glamour camping," has become a thing in places such as Colorado, with the website GlampingHub.com currently linking to more than 1,000 Airbnb-type listings for luxurious cabins and the like in the state. This week, however, a proposal for a full-scale glamping facility, complete with modified tents outfitted like motel rooms, is expected to win approval in the Silverton area, with a debut possible as soon as next year.

As an example of high-end glamping, San Juan County Planning Director Mark Reavis cites The Resort at Paws Up in Montana, whose spectacular accommodations are seen in the photos that illustrate this post. In Reavis's view, Paws Up represents genuine glamping, whereas "some of the other places don't live up to the name. I mistakenly went to one, and it let me know what it would be like to be at a refugee camp."

When completed, the Silverton version is likely to occupy a middle ground between ultimate poshness and an episode of Naked and Afraid. Dennis Stenslien, who's developing the property along with owner Steve Lee, is calling it " an "on-your-own experience."

According to Reavis, the twenty-acre parcel set aside for the facility "is not far out of Silverton, which is good for our economy, since they'll be able to interface with what we have here. It's about a mile west of town, heading up toward Red Mountain Pass, but it's still relatively flat. The majority of it is wetland, including a beaver pond, and it's common to see moose, and baby moose. It'll feel like you're out in the wild, but you'll be readily able to access emergency services and those kinds of things."

Creekside dining at Montana's Paws Up resort.
Facebook
Plans call for up to fourteen campsites, with the tents set up on "code-built, solid platforms with a deck," Reavis says. "And they won't have hard, single beds like you think of with camping, but nice, cushy beds" and the sort of accoutrements and decor associated with dwellings that remain in place permanently rather than being folded up and put away after use.

Also envisioned for the space: a bathhouse, a sauna, a fire pit and both bathrooms and showers.

In addition, a continental breakfast and to-go lunches will be available to those who want to take part in proposed activities such as horse rides, fishing trips or educational hikes with guides provided by the facility. Reavis calls Stenslien "a crazy Norwegian. If he's around, you're going to have a good time."

The concept has been in the works for a while. Reavis figures that Stenslien and Lee have spent at least four years putting it together, and he's been assisting them for a year or so. Over that span, the two have spent thousands making sure they're complying with local, state and federal regulations.

The view from a bed at Montana's Resort at Paws Up.
Facebook
"Our county land-use codes are pretty intense," acknowledges Reavis, who takes pride in ensuring that any development complies with wide-ranging environmental standards. "They've had the challenge of going across about 300 feet of U.S. Forest Service property, and they had to do wildlife studies and endangered-species studies and all sorts of stuff. They've really been working on this to do it right."

The proposal sailed through a planning-department hearing on December 12, with only a couple of new conditions put in place; the word "unrestricted" was removed from the current helicopter landing permit and the owners were asked to make a written commitment to the Forest Service pledging to provide access to public lands in the potential development of a bridge. For that reason, Reavis doesn't see any insurmountable obstacles when it's considered by the San Juan County commissioners on Friday, December 15.

After that, Reavis says, "I think they're going to hit it pretty hard. I would imagine that in year one, they'll have tent platforms in, or at least the foundations. They'll need staff cabins there so they can concentrate on building — and they've already got a barn there. I don't know when they'll be ready for anybody, but they may be ready for a soft start with a couple of platforms" sometime during 2018, with the complete operation expected to be up and running the year after that.

The cost per tent is estimated at $200 per night — a relative bargain by the standards of Paws Up-style glamping, where the daily price tags can reach into four figures. The idea is that your wallet won't be roughing it, and neither will you.