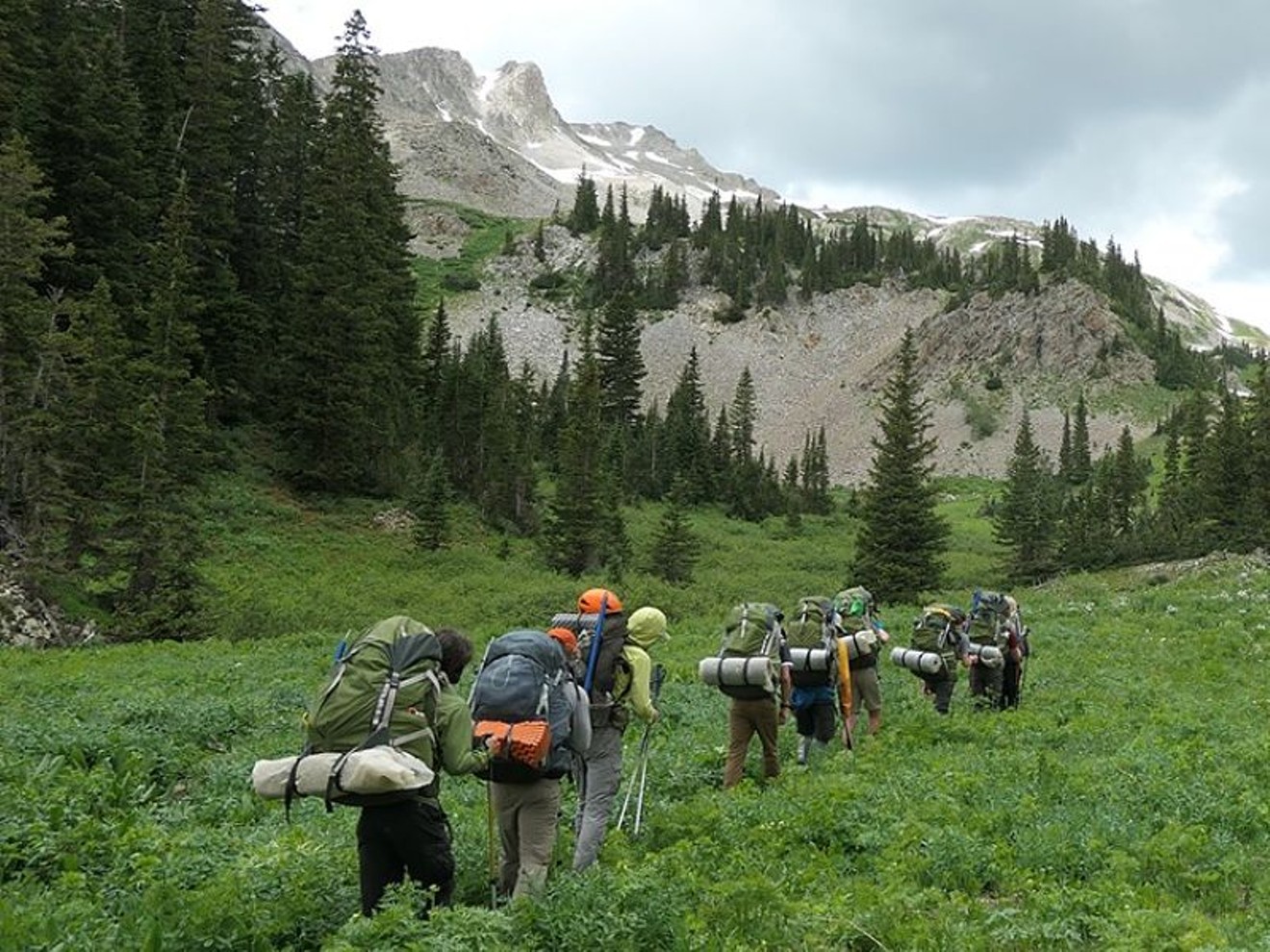 A Colorado Outward Bound trip heading into the wilderness. Austin Gibney
Coloradans have thousands of miles of stunning hiking and biking trails just outside their front doors. The state’s immense trail network spans 41 state parks, four national parks, eight national monuments, thirteen national forests and grasslands, and fourteeners galore. There are at least 325 private campgrounds wedged between Kansas and Utah — not to mention endless opportunities for camping on the 8.3 million acres of public land managed by the Bureau of Land Management in this state.

But despite the plethora of opportunities, relatively few people of color venture into the great outdoors.

In 2018, about three-quarters of all outdoor-activity participants qualified as “Caucasian,” according to the Outdoor Participation Report, a research paper produced annually by the Outdoor Foundation, the philanthropic arm of the Outdoor Industry Association. To create that report, researchers study forty-plus outdoor activities across America, gaining insight into a range of topics including geographic and demographic trends, motivations for participation, purchasing behaviors and barriers to participation. Less tangible data, such as perceptions and stereotypes regarding the outdoors, is collected, too.

According to the 2019 Outdoor Participation Report, the most recent available, only about half of the U.S. population participates in outdoor recreation at all. And that half has a lot in common.

The typical outdoor participant is a college-educated white male in his late thirties living in a household with an annual income of at least $75,000. While a growing number of participants are female (46.1 percent), the numbers definitely skew white, despite modest increases in Hispanic and Latinx participation.

Data from the U.S. Forest Service also shows extreme inequality in the ethnic and racial mix of people who visit public lands. Black people, for example, comprise only 1.2 percent of all visitors to national forests. Hispanics and Latinx individuals participated slightly more, at a rate of 5.7 percent, despite the fact that they account for 18.3 percent of the country’s population, according to a U.S. Census Bureau estimate generated in 2018.

While there are national figures about the ethnic makeup of park users, there are few studies that break out the percentages for Colorado. The most recent survey that did — the NPS Comprehensive Study of the American Public — is ten years old. That survey profiled a random sample of 755 people who visited Rocky Mountain National Park during a one-week period in July 2010. Ninety-five percent of the respondents were white; 2 percent were Hispanic, and 2 percent were Asian.

Mary Arlington, who owned a private campground in Colorado for ten years before stepping into her current gig as the executive director of the Colorado Campground and Lodging Owners Association, can provide some anecdotal information, however. During her days as an owner, Arlington estimates that fewer than 5 percent of her guests were people of color. “I’m thinking it was more like 2 or 3 percent,” she says. “I didn’t keep those kinds of statistics, so the best I can do is guess.”

But for those few who are able to take advantage of outdoor activities, the experience can be life-changing. To create more opportunities for people of color, Colorado Outward Bound School retooled some of its trips and created a scholarship program that allowed April McMullen to take a six-day rafting trek last summer. “The most important thing I got out of it was being able to process and accept years of trauma,” McMullen says. “Being submerged in nothing but nature, it was the most wonderful feeling. I came back a happier person.”

Read more about her story here.
KEEP WESTWORD FREE... Since we started Westword, it has been defined as the free, independent voice of Denver, and we'd like to keep it that way. With local media under siege, it's more important than ever for us to rally support behind funding our local journalism. You can help by participating in our "I Support" program, allowing us to keep offering readers access to our incisive coverage of local news, food and culture with no paywalls.
Make a one-time donation today for as little as $1.