About 1,900 people registered for the June 3-4 event hosted by Colorado Christian University at the Gaylord Rockies Resort & Conference Center, which was packed with speeches and panels. Much of this year's programming revolved around five principles: sanctity of life, traditional family values, free markets, limited government and original intent of the U.S. Constitution. Colorado gubernatorial candidate Greg Lopez says that he will "defend these principles to the last dying breath that I have."

Lopez and Heidi Ganahl, the University of Colorado regent who's also running for the GOP nomination for governor, both talked about their campaigns during panels, and also took the time to chat with Westword.

Lopez, who was elected mayor and city manager of Parker when he was 27, is the former Colorado director of the U.S. Small Business Administration and a small business owner himself. An Air Force veteran, he's currently a resident of Elizabeth.

The biggest issues he feels Coloradans are facing right now are crime and what children are learning in schools, Lopez says: "Our school system is broken here in Colorado. What we need to be teaching our children is the skill sets they need to be independent and have dignity when they graduate. They need to have the life skills for them to be self-reliant. As governor, what I'm going to do is I'm going to make sure parents get the rights back that they deserve from the schools themselves, and we're going to bring vouchers to the state of Colorado so parents can choose where their children go to school, and the money will follow the child." 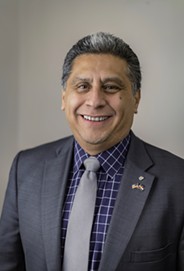 Greg Lopez
Luke Hand
In light of the school shooting in Uvalde, Texas, school safety was a big topic at the summit. Lopez says that any citizens with concerns for their children's safety in school have valid feelings. He'd tackle the challenge by making sure there are more police officers at schools as well as programs to handle mental health, rather than focus on gun control.  "How would you protect your child if you don't have the ability to carry a gun, if you don't have the ability to use something that we know the criminals have in their possession?" he asks. "You know, how do you counter that?"

Unlike providing school options and making them safe, Lopez says that housing affordability is not the government's problem to solve. "The minute people start relying on government, then they stop relying on themselves, and that's not what the government's all about," he adds, suggesting that local communities should be working on making housing more affordable, and the government's role should be to facilitate the conversation.

Like Lopez, Ganahl has been a small business owner — though hers grew to be the giant Camp Bow Wow, before she sold the multimillion-dollar franchise. She points to her success as great experience that has prepared her to be governor. And unlike Lopez, she says that housing affordability is one of the issues she wants to help solve.

"On housing, a quarter of the cost of new housing is regulations, permits and fees, so the best thing I can do as a governor and a leader in our state is to encourage local municipalities to reduce those permits and fees and regulations, but also to do it from a statewide level and look at zoning restrictions," Ganahl says. She'd also like to eventually eliminate a state income tax in Colorado, a concept that Governor Jared Polis has also promoted.

Heidi Ganahl
Heidi Ganahl for Governor
Ganahl shares Lopez's belief that while school safety is a legitimate concern, gun control isn't the answer. "Colorado has some of the strictest gun regulations in the country and our crime is skyrocketing, and obviously we have an issue with school shootings here based on what’s happened in the past," she says. "I believe we’ve got to have a conversation about it, but I don’t think that’s the only thing we should be talking about."

She wants people to be talking about security levels. "We’ve got to make it just as much of a priority to protect our schools as we do our banks, our capitols, concerts," she says. "You know, it’s pretty hard to do anything bad in those places, and we’ve got to make our schools the same way." She also suggests that individual schools be studied for cultural factors that could affect safety.

During her panel, Ganahl said that her faith led to her running for governor. "I have faced battle after battle in my life, and I have been surrounded by great people, my family, who have helped me get through it," she told the audience. "But the most important thing that's gotten me through it is my faith. My faith has carried me through the tragedies woven through my life."

While Lopez says that Christian faith is also a guiding principle of his campaign, he doesn't believe it will affect his ability to represent all Coloradans. "It's who I am, so when you make decisions based on who you are, it does have an impact," Lopez acknowledges. "But for me, when there are tough decisions — and we all face tough decisions in our lives — and when you are trying to represent 5.8 million people and you have to look at all the different lifestyles and all the different industries, you must make decisions based on what is in the best interest of everyone."

Both candidates are listed on the Republican primary ballot that was mailed out on June 6; the victor of the June 28 primary will face Polis.

Watch Lopez's and Ganahl's Western Conservative Summit appearances here.
KEEP WESTWORD FREE... Since we started Westword, it has been defined as the free, independent voice of Denver, and we'd like to keep it that way. With local media under siege, it's more important than ever for us to rally support behind funding our local journalism. You can help by participating in our "I Support" program, allowing us to keep offering readers access to our incisive coverage of local news, food and culture with no paywalls.
Make a one-time donation today for as little as $1.