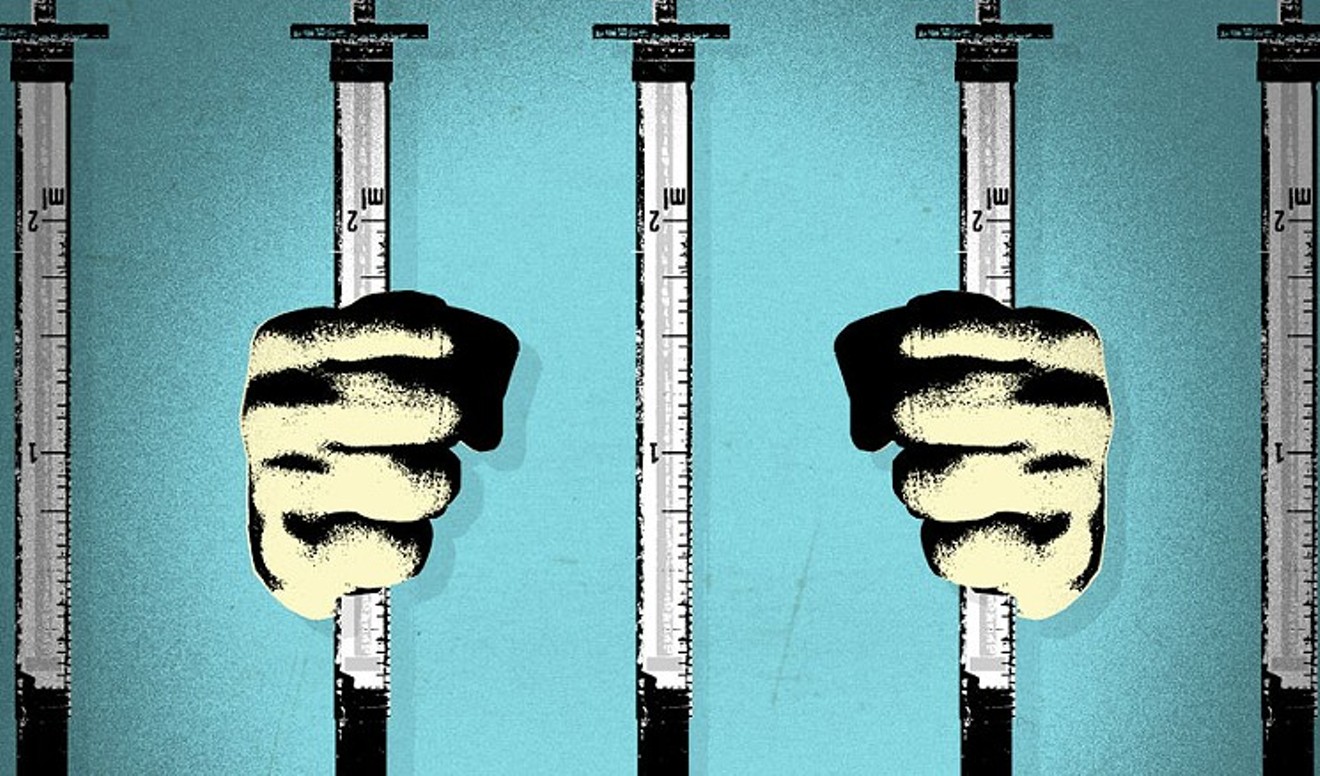 Hepatitis C has long been the biggest killer in Colorado prisons, despite the development of drugs that virtually eliminate the virus. Westword illustration
The Colorado Department of Corrections will spend $41 million over two years to provide life-saving drugs to 2,200 prisoners who've been diagnosed with chronic hepatitis C. The move was approved today, September 12, by the Colorado State Claims board, settling a class-action lawsuit brought by the ACLU of Colorado and Fox Rothschild attorneys, which accused the state of delaying or denying treatment for prisoners battling the potentially deadly virus because of the high cost of the medications involved.

The state is spending $20.5 million in this year's budget, and the same amount next year, to address a backlog of prisoners who've been waiting in line for a new generation of wonder drugs, known as direct-acting antivirals, that virtually eliminate the virus in more than 90 percent of the patients treated. That's an exponential increase over the $2.8 million the CDOC spent to treat just fifty prisoners for hep C in the previous two years.

As first reported in our 2016 feature "The Deadliest Killer in Colorado's Prisons is a Curable Virus," prison administrators had set up stringent requirements for treatment that amounted to a multi-year obstacle course for inmates suffering from the virus. Partly because of the stigma associated with the bloodborne virus, which is primarily acquired through sharing needles, and partly because of its pervasiveness behind bars (it's estimated that 17 percent of the national prison population is affected), officials required prisoners to go through months of drug and alcohol classes and have particularly deteriorated livers before they could begin treatment. The severe rationing was also spurred by the fact that the new wonder drugs, when they first debuted, cost as much as $95,000 for a twelve-week regimen.

A Westword review of 823 deaths within the DOC over fifteen years found that 161 of those deaths, nearly one in five of them, were caused by end-stage liver disease and related illnesses. That’s roughly twice the number of suicides behind bars during that same period, three times the number of deaths attributed to drug and alcohol use, and four times the number of homicides. The data provided doesn’t specify how many of the liver-related deaths were the direct result of hep C complications, but the DOC has determined that the virus was a contributing factor in at least eighteen deaths between 2014 and 2016.

Before the lawsuit was filed, the CDOC had planned to treat 400 prisoners over a ten-year period, with the aim of treating all infected prisoners by 2035. But as we noted in our 2016 report, "The calculations don’t address infected people moving in and out of the system, or how many deaths and 'additional complications' would result from lack of treatment of thousands of inmates between now and 2035."

Under the terms of the settlement, the CDOC will no longer require prisoners to complete drug and alcohol classes before they can receive hep C treatment. Nor will the fact that an inmate's liver enzyme numbers aren't at a critical level be a reason for denying treatment. With the price of the treatment dropping to below $20,000 per patient, the additional funds allocated should eliminate the backlog and allow for treatment of new cases as they emerge, cutting down on the risk of costly liver transplants and other complications.

"The funding and policy changes agreed to in this settlement will go a long way toward solving an immense public health crisis in Colorado's prisons," says a statement issued by ACLU of Colorado legal director Mark Silverstein, who has also credited Westword's reporting with helping to bring attention to the issue. "We know that this settlement will save lives here in Colorado, and we hope that it will be a model for other states as well."

Attorney Christopher Beall of Fox Rothschild notes that curing hep C among the prison population "will go a very long way toward reducing the public health risks for hepatitis C transmission across the country."
KEEP WESTWORD FREE... Since we started Westword, it has been defined as the free, independent voice of Denver, and we'd like to keep it that way. With local media under siege, it's more important than ever for us to rally support behind funding our local journalism. You can help by participating in our "I Support" program, allowing us to keep offering readers access to our incisive coverage of local news, food and culture with no paywalls.
Make a one-time donation today for as little as $1.