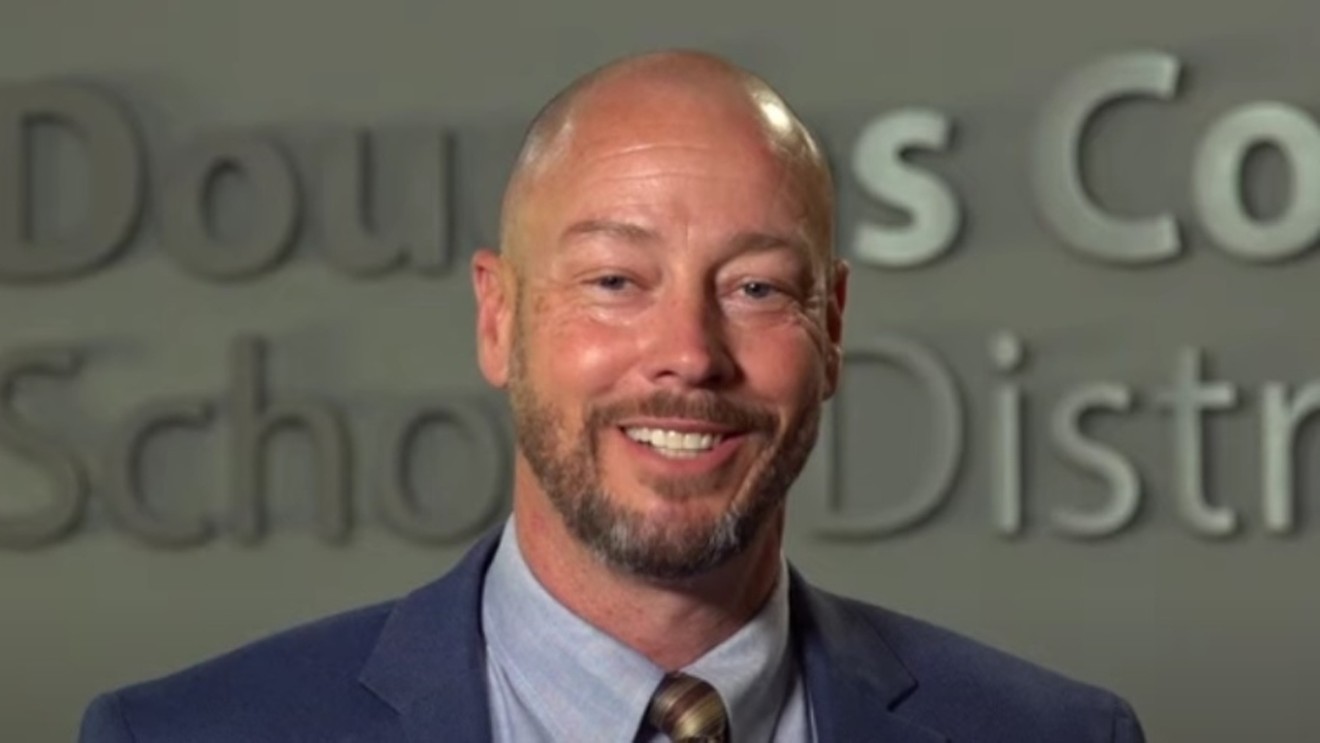 Wise doesn't want his latest move to be interpreted as an attack on Douglas County schools, but rather as an effort to help them reach their full potential.

"I've said this forever: I love the Douglas County School District," stresses Wise, who spent 25 years with the DCSD; he worked as a teacher and principal before moving into executive roles that culminated with him being named interim superintendent in October 2020 and signing a three-year contract the following May to take the job permanently. "I love Douglas County, too, and I want us to be at our best."

At the same time, he says that while "we've been through trials and tribulations before, this is different. But challenges give us an opportunity."

Wise's complaint, dated April 13 and filed by Denver's Rathod Mohamedbhai LLC, acknowledges that he wasn't dismissed "because of his personal identity or protected characteristics," but because "through his advocacy on behalf of students and staff whose characteristics are protected by state and federal civil rights laws," including those whose status falls under the Americans With Disabilities Act (ADA) and students of color, "the new Board majority associated Mr. Wise with such protected groups, and unlawfully fired him for that association and advocacy."

Rathod Mohamedbhai principal Qusair Mohamedbhai confirms that the complaint is a precursor to further actions against the district and boardmembers Mike Peterson, Becky Myers, Christy Williams and Kaylee Winegar, who were elected in November. "The filing is a required first step before a lawsuit is filed," he says. "And yes, we are preparing a lawsuit."

Prior to Wise behind hired, Thomas Tucker was superintendent of the Douglas County School District, the third-largest in Colorado and the county's largest employer; 8,000 workers serve more than 65,000 students at ninety-plus schools. Tucker took the position in 2018, and during his roughly two years on the job prior to resigning in 2020, he planted the seeds of a new educational equity policy by circulating a survey as part of an overall strategic plan; it collected around 30,000 responses from teachers, staffers, students and community members. As part of this initiative, Tucker "formed an Equity Action Team consisting of several dedicated volunteer administrators to help organize and lead the formulation of an equity policy," which the filing portrays as becoming more urgent after complaints from students following protests over the murder of George Floyd in May 2020. 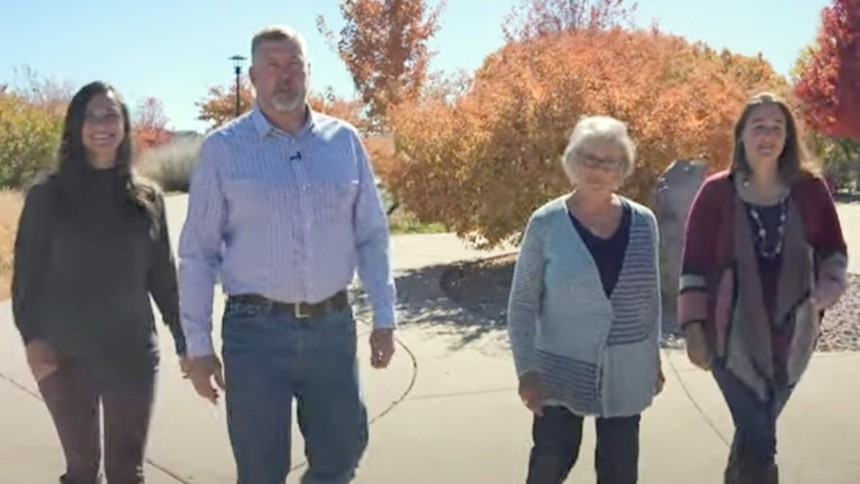 (From left) Kaylee Winegar, Mike Peterson, Becky Myers and Christy Williams, the members of the Douglas County School Board's conservative bloc, as seen in a 2021 campaign video.
Kids First DCSD via YouTube
On September 1, 2020, the team presented the plan, which was adopted the next March. Here's a summary of its steps from Wise's discrimination complaint:


a. Creating and implementing an equity resolution and policy in the DCSD.
b. Implementation of “No Place for Hate” in all secondary neighborhood schools. “No Place for Hate” is a customizable program developed by the Anti- Defamation League to help engage students and staff in dialogue and active learning on the topics of bias, bullying, inclusion, and allyship.
c. Creation and maintenance of a standing committee, including staff, parents, students, and community members, to move action forward regarding diversity, equity, inclusion, and accessibility.
d. Collecting sample audits, documents, and critical resources to help guide ongoing work and vet surveys regarding culturally safe environments.
e. Beginning “Courageous Conversations” planning for administrators and strategic plan cohorts. “Courageous Conversation” is a professionally developed protocol for engaging, sustaining, and deepening interracial dialogue with the hope of exposing racial biases and eliminating racial disparities.
f. Expanding professional development opportunities including making accessible to all staff courses that address equity, diversity, inclusion, and accessibility.
g. Conducting equity audits and data collection.
h. Auditing current curricular resources and introduce minimum recommended for list of diversity/equity books and resources in school and district collections.

These goals hardly read like a primer on critical race theory, yet that's how they were framed by the four boardmembers named in Wise's complaint. For instance, Peterson is quoted as lamenting that DCSD "brought in consultants for $37K to push CRT on our teachers. They [the consultants] defined ‘the system’ as racist and ‘White, male, able, Christian, and straight'...set[ting] up the false oppressor/victims paradigm based solely on race and urged collective action against the system." Peterson also complained about the previous board's “radical agenda in practice — one based on division, equal (low) outcomes, and race-based policies that are discriminatory and will only set our kids up for failure" and contended that critical race theory "would teach his own children that their father…is an oppressor based on historical actions of others and [that] two of them are permanent victims that cannot improve their station in life."

The discrimination complaint argues that Wise was scapegoated as a proponent of critical race theory. "When you listen to what the four boardmembers said in their pre-election speeches, in interviews, and what they said in forums, and even what they said after they were elected, it's not completely surprising," Wise says. "They stated a lot of that to be elected. But the inaccuracies are what's puzzling. It's not accurate that the equity policy was critical race theory, but they used a narrative they felt would help them get elected, and then they took the actions that they have."

The controversy over mask use came to a head in October 2021, when the Douglas County Health Department, which was formed after county commissioners bailed from the Tri-County Health Department over COVID restrictions, approved an order allowing parents to opt out of school face-covering mandates for their kids despite spiking infections related to the disease's Delta variant. Two days later, the school district, which had been resisting pressure from the commissioners, reiterated that face coverings were still required at its institutions.

This point was reinforced by a subsequent lawsuit in which the school district was a plaintiff, and John L. Kane, a U.S. District Court judge for the District of Colorado, soon delivered a smackdown to the health department, issuing a temporary restraining order that was later extended. The agency eventually caved, and on November 19, the suit was officially dropped. But by that time, Peterson and company had already been elected to the school board, guaranteeing a policy reversal that took place on December 7.

Winegar's views on the subject are illustrated in the complaint by excerpts from an interview with the Colorado Times Recorder: "When it comes to mask wearing, parents are the ultimate authority over their health. ... And so, that’s where I stand, is that we really need to fight to make it a choice for our kids because my personal stance is I do not like sending me daughter with a mask to school. She’s five years old and I get worried if she’s too hot she’s scared to take it down and I’m not there to tell her, ‘Yeah, you can. You can take it down.’"

Wise continued to support masking during this period. "I, like every superintendent, needed to protect students and staff for the safety of all, and following the ADA to protect our most vulnerable was critical for everyone," Wise says. "But unfortunately, it became a topic we could not work through with the Douglas County Board of Health in order to protect the ADA and those most at risk. That's why we became part of that lawsuit. We had to testify and stand up for those who are disabled and have chronic health concerns."

Doing so earned Wise the enmity of the four boardmembers, however, and he suffered the consequences. "They made it clear in their process and afterward, with the termination piece, that it was a part of their decision," he says.

Since his firing, Wise has been in high demand. Soon after his firing, he was hired by Jeffco Public Schools as a community superintendent to fill a position vacated by Dave Weiss, who'd been promoted to the district's chief of schools, through the end of the 2021-2022 academic year. And this week, he was chosen to act as interim assistant superintendent for the Cherry Creek School District starting this fall. Wise has high praise for both districts. "I want to jump right in and make a difference," Wise says of the new gig.

Still, the future of the Douglas County School District and its board, which recently chose Erin Kane as superintendent after a process that spawned a lawsuit over alleged violations of the Colorado Open Meetings Law, remains top of mind for Wise. "I believe in the students, employees, teachers, leaders and the community," he says. "It shows a need to step up and come together and do what's right to make our schools healthier, better and stronger."

Westword has reached out to the Douglas County School District for comment about the complaint. Click to read Corey Wise's charge of discrimination against the Douglas County School District and four members of the Douglas County Board of Education.
KEEP WESTWORD FREE... Since we started Westword, it has been defined as the free, independent voice of Denver, and we'd like to keep it that way. With local media under siege, it's more important than ever for us to rally support behind funding our local journalism. You can help by participating in our "I Support" program, allowing us to keep offering readers access to our incisive coverage of local news, food and culture with no paywalls.
Make a one-time donation today for as little as $1.