Too few security checkpoints contributed to long lines on 4/20. Michael Roberts
This year's annual 420 Rally left behind everything from trash to complaints about long lines and too-few security checkpoints. Four days after the gathering in Civic Center Park, Mayor Michael Hancock stood in the same park and called for a top-to-bottom review of policies, procedures and requirements for not just that annual event, but others in Denver's parks, all with an eye to compliance with the Public Event Policy and Park Rules and Regulations adopted in October 2016.

The results of that review — which looked at trash management, noise, public safety and security, among other things — were outlined in a letter sent on May 19 to permit-holder Miguel Lopez and his attorney, Rob Corry; they were released to the public this afternoon by Parks and Recreation.

Because of failure to comply with certain requirements, DPR is fining the event organizer $11,965, plus an additional $190 in damages. But the bigger punishment isn't monetary: The event-holder is banned from applying for any Denver event permit for three years, and its Priority Event status — which gave Lopez first crack at holding a rally on 4/20 in Civic Center Park — is rescinded.

Another organizer could still go for a permit for Civic Center Park on April 20, but under city guidelines, that application time frame is still months away. As for the 2017 420 Rally:

“After a thorough review of the event, substantial violations of city requirements were found,” Happy Haynes, DPR executive director, said in a statement accompanying the letter's release. “We will continue to ensure that events in our parks are safe, compliant and of high quality, and we remain focused on protecting Denver’s parks and facilities, which are valuable assets to our city and our residents.” 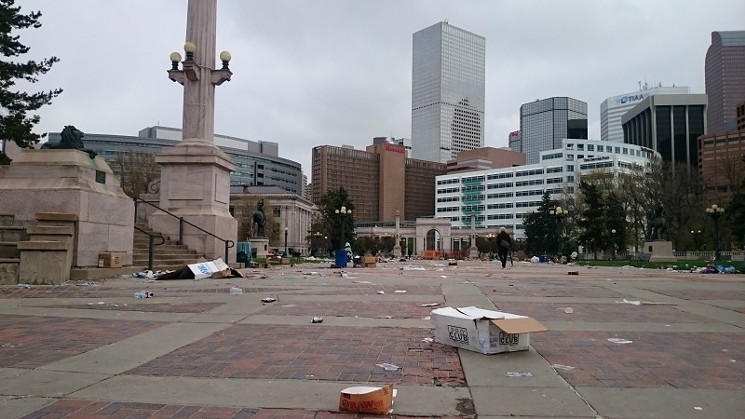 The morning after the 420 Rally.
Michael Roberts
On April 24, Hancock had issued his own statement in the wake of the rally. “Seeing our Civic Center in a state of disrepair was for many in our city – including myself – deeply disappointing and discouraging," he said. "Our parks and public spaces are held in the public trust, and when organizers hold an event at one of these spaces, they have a responsibility to uphold that public trust. And when organizers leave one of our parks trashed, they violate that trust. Further, we experienced an event that was under-resourced and presented numerous safety hazards. This level of disorganization displayed before, during and after the event requires additional action by the city."

Now the city has taken that action. Lopez has fifteen days to appeal the findings of the letter, which attorney Corry is already disputing.

"The Denver 420 Rally organization strongly disputes the findings of Happy Haynes," he says. "None of the alleged violations are even remotely close to 'substantial' and do not merit revocation of the permit.

"We understand that the city political power structure, from the mayor on down, disagrees with our message, which is protected by the First Amendment. These alleged violations are all of a pre-textual nature designed to silence our message."

Here's the May 19 letter from the Denver Department of Parks and Recreation.