4/20 Happens on April 20 Because of Us, Rally Injunction Request Will Claim 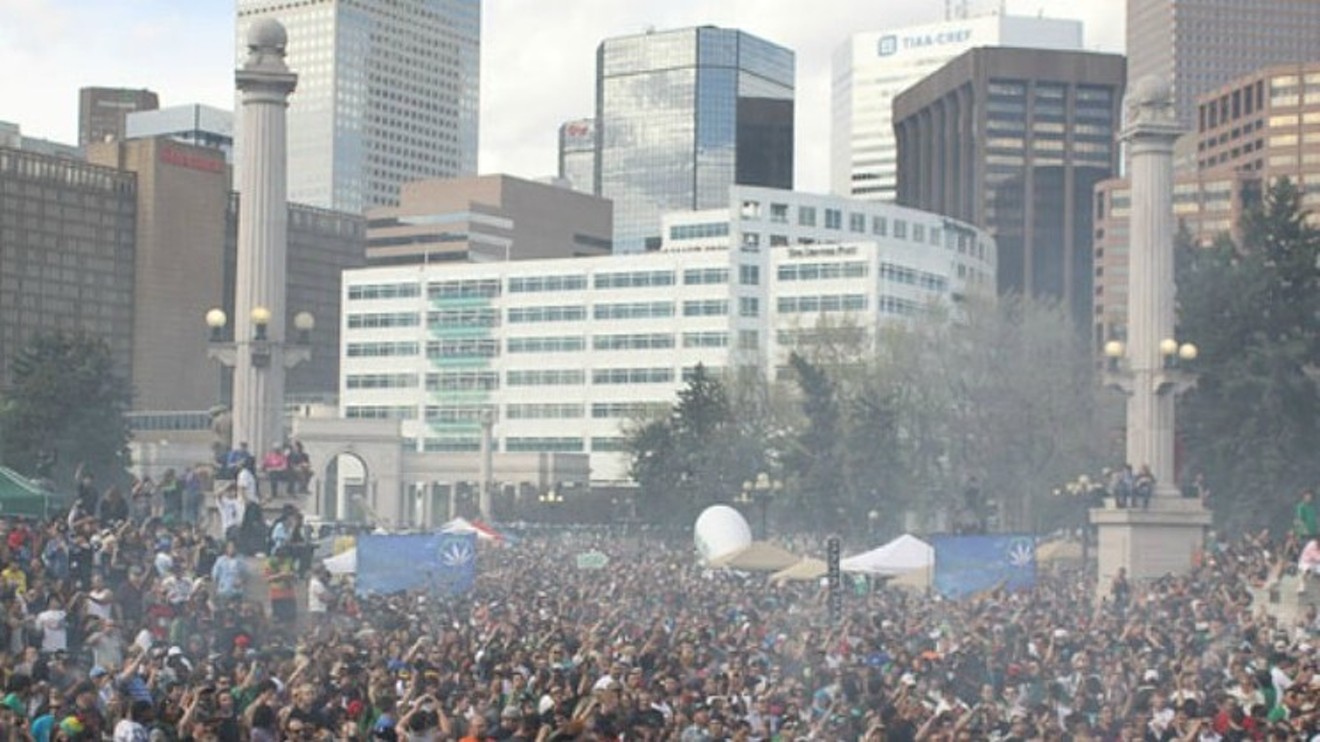 A request for a temporary injunction to be filed in relation to the Denver 420 Rally will claim that the celebration's April 20 date was by the now-jilted organizers. Photo by William Breathes
A request for a temporary injunction against the City of Denver for banning organizers of the Denver 420 Rally from staging the event for at least three years over alleged violations at the gathering earlier this year could be filed as early as today. The rally's attorney, Rob Corry, says the document will make the argument that any marijuana-related event held on April 20 would violate the current crew's trademark and intellectual property.

"April 20 as a date associated with cannabis: We pioneered that," he maintains.

On November 17, as our Ana Campbell reported, Denver's Parks and Recreation department revealed that a hearing officer had "denied the appeal of the event organizer of the Annual 420 Rally held at Civic Center Park and upheld the Notice of Issues and Violations imposed earlier this year."

Parks and Rec added that "after a thorough review of the event, substantial violations of city requirements were found, including health standards, trash management, public safety and security. DPR imposed a monetary penalty in the amount of $11,965, plus an additional $190 in damages, banned the event organizer from being granted any event permit for three years, and rescinded their Priority Event status." 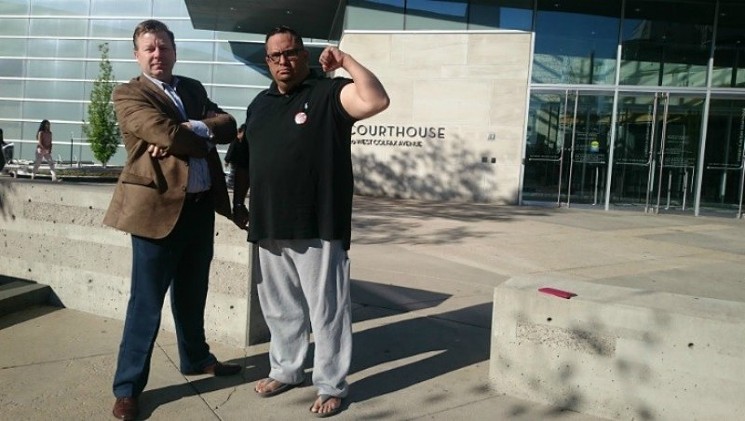 Attorney Rob Corry and Denver 420 Rally organizer Miguel Lopez.
Photo by Michael Roberts
In addition, the department announced that applications for staging an event on April 20, 2018, would be accepted beginning at 7 a.m. today, November 21, at the Wellington Webb Municipal Building, 201 West Colfax Avenue, on a first-come, first-served basis. Those gathered will no doubt include representatives of Euflora, who began camping in front of the Parks and Rec offices in October in an effort to win approval to stage a marijuana get-together at Civic Center Park next spring.

Corry's efforts are intended to stop the rewarding of such a permit to anyone other than Miguel Lopez, who staged the first Denver 420 Rally in 2007 with the blessing of founder Ken Gorman, whose murder ten years ago remains unsolved.

In Corry's view, the hearing officer's ruling "doesn't have a lot of analysis about why the city's arguments prevailed over our arguments and doesn't really address our core point that the department was supposed to allow us until 5 p.m. the next day to clean up — and we were easily compliant with that time." Additionally, he goes on, "we corrected the other issues that came up with the event as soon as we became aware of them. Our conduct was reasonable, but the hearing officer didn't really seem to consider it. Instead, the report just kind of repeats the arguments made by each side and then agrees with the city."

In the request for the temporary injunction, Corry notes that "we'll be able to bring up a lot of the constitutional arguments that we couldn't bring up during the hearing, because of the city's own regulations, including a First Amendment argument. We have a certain viewpoint, and the city is discriminating against us because of that viewpoint — treating us differently than other similar events and holding us to other, different standards."

Some of the trash at Civic Center Park the morning after the 2017 Denver 420 Rally.
Photo by Michael Roberts
In addition, Corry believes that by awarding an April 20 event permit to another cannabis concern, "the city would be aiding and abetting a violation of our trademark and intellectual property. We came up with and built the concept of the Denver 420 Rally, and to allow someone to usurp our decade-long effort would be inappropriate — as inappropriate as someone coming in and taking over Taste of Colorado by calling it Taste of Colorado and holding it on the same weekend organizers had previously staged the event. We still own the rally, and the city can't take it away from us through this process."

Prior to the first Denver 420 Rally, "420 was always about the time, 4:20 p.m.," Corry says. "The April 20 date wasn't a thing in the cannabis community until we created it. No one did that until we did. Ken Gorman handed it off to Miguel Lopez, and the transition occurred. This is our concept, and nobody can take it away. April 20 at Civic Center Park: Those are linked. It was our idea."

If the request for a temporary injunction fails, Corry goes on, "we feel pretty confident that if somebody else throws a marijuana rally on or around April 20, we will be able to disgorge all the profits from that event, because it will have been built 100 percent on our previous work."

He doubts the situation will come to that, however. In his words, "We expect that the court will apply normal laws and won't allow someone to profit off our name and our hard work and build this on the back of our organization, just because the city effectively wants to destroy us."