Will More Heroin Addicts Shoot Up at Library After Safe-Injection Bill's Death?

State representative Leslie Herod says the Denver Central Library is currently Colorado's only safe-injection site. File photo
While advocating for a bill to create a safe-injection-site pilot program, Representative Leslie Herod, a vocal backer of the measure, told us, "We already have a safe-use site in Denver. It's operated illegally, and it's operating because of need. That's our Denver Public Library" — specifically the central branch at 10 West 14th Avenue Parkway, where six people overdosed during the first three months of 2017 alone — "and it's a huge problem. We need to move that population away from the library, and away from the bathrooms in coffee shops and restaurants, and move them to a place where they can get connected with services."

But that's not going to happen now, because the legislation is officially dead.

Political observers saw this fate coming. On February 5, as we reported, Democrats withdrew Senate Bill 18-040 from the committee considering it in the face of GOP antipathy. Afterward, state Senate president Kevin Grantham was quoted as saying, "I can’t keep my mind wrapped around creating these enclaves of places where illegal activity is brushed under the rug."

Then, yesterday,February 14, the bill was postponed indefinitely after Dems wound up on the short end of a party-line vote.

Mere months earlier, reformers were much more optimistic about the prospects for a safe-injection site. Late last year, we asked the Drug Policy Alliance's Art Way to analyze a series of six opioid bills proposed for the current legislative session, and he was particularly enthusiastic about one summarized like so: "Create a pilot project for a supervised injection facility in Denver. Like needle-exchange programs, data show that SIFs do not increase the use of illicit drugs, but do reduce the spread of diseases like HIV and hepatitis C while increasing referrals to medical and/or substance abuse treatment."

"Three or four years ago, people would look at you like you were crazy when you'd bring up something like supervised injection facilities," Way told us. "That's one thing about this epidemic. Because of it, we were able to cut through the BS a lot quicker than we would have if it wasn't for the fact that soccer moms, and their sons and daughters, are now dealing with the opioid issue." 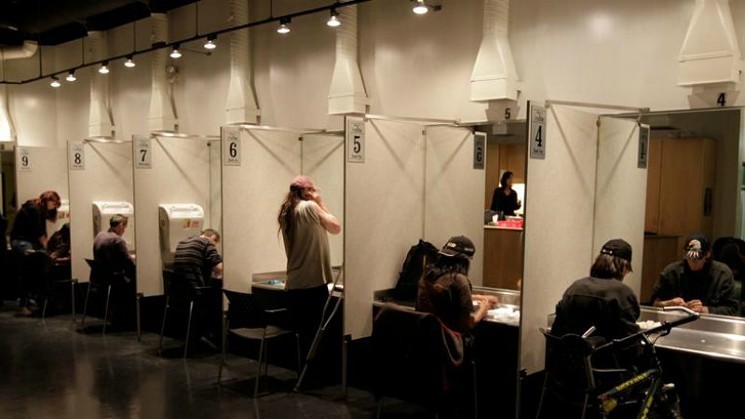 Injection booths at Insite, a supervised injection site in Vancouver recently visited by a delegation from Denver.
Facebook
For more information about such centers, Herod traveled in January to Vancouver, British Columbia, to visit Insite, which is described on its website as "a supervised drug injection site accessible to street drug users. Insite has injection booths where clients inject pre-obtained illicit drugs under the supervision of nurses and health care staff. Clean injection equipment such as syringes, cookers, filters, water and tourniquets are supplied. If an overdose occurs, the team, led by a nurse, are available to intervene immediately. Nurses also provide other health care services, like wound care and immunizations."

Herod, who was accompanied by fellow representative Brittany Pettersen and a delegation of Denver city officials, health-care professionals and folks from law enforcement, came away impressed by what she saw.

"Vancouver has been particularly hard hit by the opioid crisis, and the city has put in place a lot of interventions to keep overdose deaths down," she said. As for Insite, "the nurses and people on hand are trained on Narcan and other medications to reverse overdoses. We found that very interesting."

She acknowledged, "This was not the first time I have seen someone who was under the influence of heroin and who had maybe just injected — but we weren't on tour to put people on display. There wasn't a lot of watching someone put something in their arm. Instead, we watched people getting access to treatment and access to caseworkers. We spoke to the medical staff, who were doing everything they could to help people in Vancouver who were deep in their addiction, who were a little lost and needed help."

As evidence of Insite's success, Herod noted that "the facility has had over four million visits since its inception, and they've had zero overdose deaths either on site or in transport to hospitals. That's important, because that shows people are living — and they're able to take that next step into recovery."

Representative Leslie Herod serves House District 8.
greaterparkhill.org
Denver already has "a needle-exchange site right across the street from the State Capitol," Herod pointed out, "and they're saving lives. But I believe we need to take that a step further. With safe-use sites, we'll be able to keep people from overdosing and dying. And by tying a facility to one that's already doing needle exchange, we'd have a staff that's already been trained and that's been working with the population we're looking at servicing."

Not everyone on the junket was quite ready to back the immediate opening of a center. Bob McDonald, executive director of Denver's Department of Public Health and Environment, corresponding via email, wrote that the "trip to Vancouver provided an in-depth perspective on how they’re dealing with this important issue." He added, "We will continue gathering information and taking a thoughtful look at what's right for Denver in the face of a significant opioid and drug-addiction crisis."

Others were more openly hostile to the safe-injection-site notion, including numerous Westword readers. A roundup of their views included this take: "Why is Denver kowtowing to the needs of drug users and addicts? Is the city government in the business of protecting and promoting self-destructive behavior? Even the concept of 'safe-use' is a paradox in itself. There is no safe use of heroin, only flirtation with death and disease. Isn’t the creation of socially acceptable spaces to partake in such wickedness essentially a stamp of approval? Is that what Denver wants; to send a message to heroin addicts that they are welcome here?"

The same post found others aghast at the thought that Denver Central Library will continue to be injection-drug users' fixing spot of choice. "Pretty fucked up that they put this burden on librarians," one person wrote. "They definitely did not have this in mind when they decided on that career path."

Nonetheless, Denver Central Library employees are likely to face the challenge of dealing with this issue for the foreseeable future, now that the safe-injection-site bill has proved to be a non-starter.