While that's fine by councilman Kevin Flynn, he admits that he was initially uncertain what the panel was supposed to investigate and remains hazy on how to move forward. "People say city council's covering up," Flynn notes. "Well, if I'm covering up, I have no idea what I'm covering."

The council's March 13 explanation for why an investigation wouldn't be launched stressed that "the parties involved have not disputed the facts that recently surfaced." At the time, Flynn concurred.

"There had been no factual disagreement between the two, so I was kind of at a loss to know what we were supposed to be investigating — because there was agreement about everything," he admits. "I had a long conversation with a TV reporter after we put out our first statement, and I asked, 'If you were doing an investigation, what would be the first question you would ask?' And the reporter couldn't enunciate an actual answer."

Another section of the council release emphasized, "We feel strongly that any attempt to further investigate this new matter without [Branch-Wise's] request or consent would be contrary to best practice and risks re-victimizing her." But Branch-Wise punctured such paternalism on March 18 by way of a public call for an investigation during an interview with Denver7's Tony Kovaleski. Her appeal was underscored by a letter from her attorney that read in part, "As a public servant, Detective Branch-Wise understands that the risk she may experience and the strong negative emotions that the situation with the Mayor...created, must be subordinate to her duty to the people of Denver." 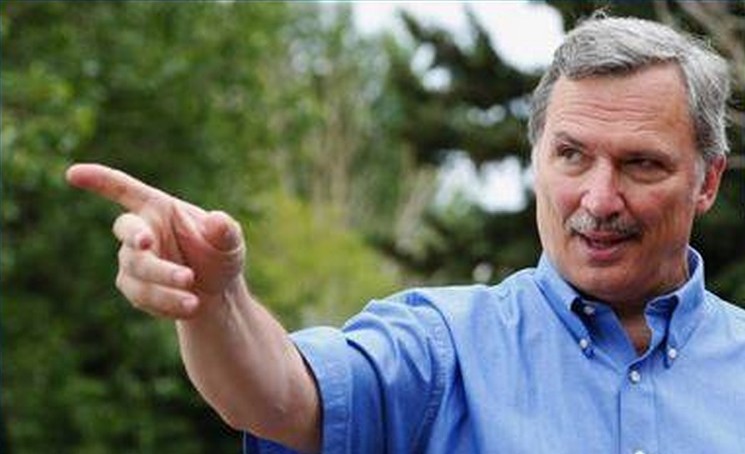 Denver City Councilman Kevin Flynn.
File photo
Shortly thereafter, Flynn notes, councilmembers authorized the city attorney who works with them to look into what a probe of this sort might entail.

"The charter allows us to do investigations into the conduct of city officials," he points out. "But the problem is, we can't impose a consequence."

At least Flynn now has a better idea of what the subject would be. "What the detective said on Channel 7 — or maybe Kovaleski said it for her — was that what the mayor did was sexual harassment, and he said it was just inappropriate texting. So I guess the investigation would center on whether or not it was sexual harassment.

"That's not a factual issue," Flynn adds. "That's a judgment call — the kind a hearing officer would make if this was being done in the Career Services system. But the mayor isn't subject to Career Services rules, so I don't know where you go with that."

As a result, Flynn says, "What we're waiting on now is for the city attorney to suggest a best practice for how to proceed, because we haven't done this in my experience here. So I don't know how it goes. Do we convene as a council and start asking questions? Do we hire an HR professional or consultant to do it for us? I have no idea."

Here's the aforementioned city council rationale for giving an investigation a pass. It was subsequently superseded for reasons shared with us by city council president Albus Brooks, who added, "A formal vote by council is necessary before we could begin any such investigation. We are listening and we are working. We will know more at the end of the week."

The Denver City Council, like many Denver citizens, is concerned about the recent reports of sexual harassment against the Mayor toward a member of his security detail. We want our constituents to know that we take these matters seriously, and we have been working to obtain as much information as possible.

Today, we learned details of the legal environment, past and present, following the reported behavior. The City settled a lawsuit with Mr. Wayne McDonald in August of 2016, after lengthy litigation. Because the legal matter at the time of settlement involved payment of wages, the settlement was paid out of departmental funds and did not require approval by the City Council.

The City settled with Detective Branch-Wise in July of 2013. Because that settlement was paid out of the claims and liability fund, Council did review and approve the settlement by resolution. While there were no claims of sexual harassment against the Mayor at that time, the Branch-Wise settlement also included a standard release of any future claims against the City arising under the same circumstances. Therefore, there cannot be any further litigation regarding the Mayor’s actions at this time.

Because Mr. McDonald’s settlement agreement includes clauses of non-disparagement, and non-dissemination, it is important that Council members (or any city employee) do not violate those contractual provisions. While Det. Branch-Wise’s agreement did not contain the same confidentiality clauses, the parties involved have not disputed the facts that recently surfaced, and we feel strongly that any attempt to further investigate this new matter without her request or consent would be contrary to best practice and risks re-victimizing her.

While we strive to be transparent, City Council members cannot comment further on the legal aspects of these matters given the confidentiality requirements. We want the people of Denver to know that at no time prior to the recent media reports were we aware of the texts currently at issue; we learned of them when you did and have been seeking information ever since.

Council stands against any kind of sexual harassment or otherwise to any person and we commend Det. Branch-Wise on her courage and conviction. Going forward, we are looking at putting processes in place to ensure that we are aware of all settlements that rise to a certain threshold. Regardless of the fund from which it was paid, we want to monitor claims in the city more closely. Again, transparency and accountability are of the utmost importance to us. We will continue to ensure that City employees feel safe to report misbehavior and are free from retaliation. We are continuing to meet with City Attorneys to get answers to our questions. We will do our best to serve the constituents of our city.