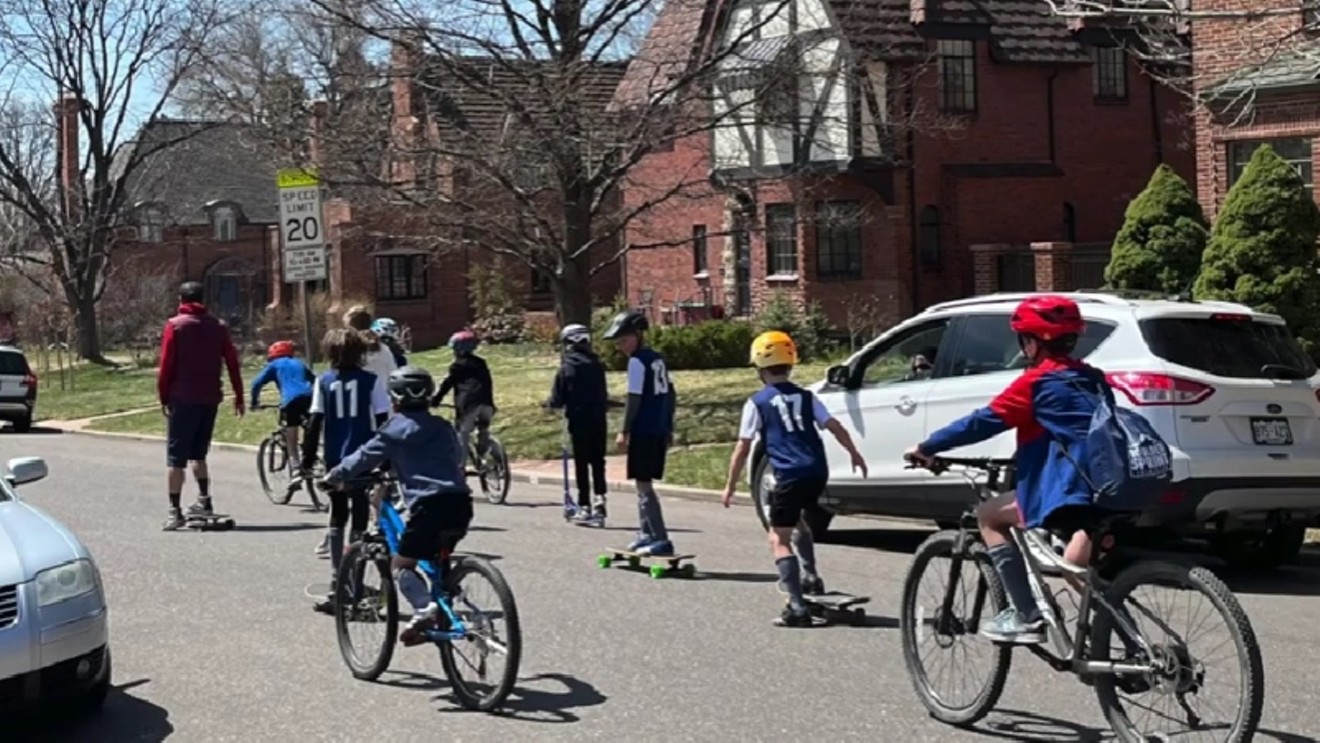 A screen capture from a video promoting the VAMOS Bike Network. Bikestreets.com via YouTube
Avi Stopper, founder of the Bike Streets Project, which uses crowdsourcing to identify Denver streets that are cycling-friendly and provides maps that help riders reach destinations safely, is scheduled to meet this week with officials from the city's Department of Transportation and Infrastructure and other agencies to pitch VAMOS, an initiative with the goal of constructing a low-stress bike network for the Mile High City.

Stopper has already launched an online petition addressed to Mayor Michael Hancock encouraging him to "build the VAMOS Bike Network now," and he's hopeful the city will be as interested in the concept as he is. "I've been doing this work for five years now," he says, "and I've never been more optimistic about Denver and its potential to be an incredible national beacon for how a city can reduce the number of vehicular miles that are traveled — and that has such a significant impact on so many parts of society."

DOTI spokesperson Vanessa Lacayo makes no formal commitment to Stopper's plan, but notes a similarity of vision. "We appreciate all efforts to promote bicycling...for Denver residents and visitors," she notes. "While Avi’s approach focuses primarily on local streets, DOTI is building a robust network that utilizes all street types accompanied with infrastructure to make biking more safe, convenient and comfortable. We have found synergy with him in Denver’s plans to create a permanent Shared Streets program and build more neighborhood bikeways."

Stopper underscores this last point: "Candidly, VAMOS is an extension of what the city is already doing," particularly Denver's revival of Shared Streets. 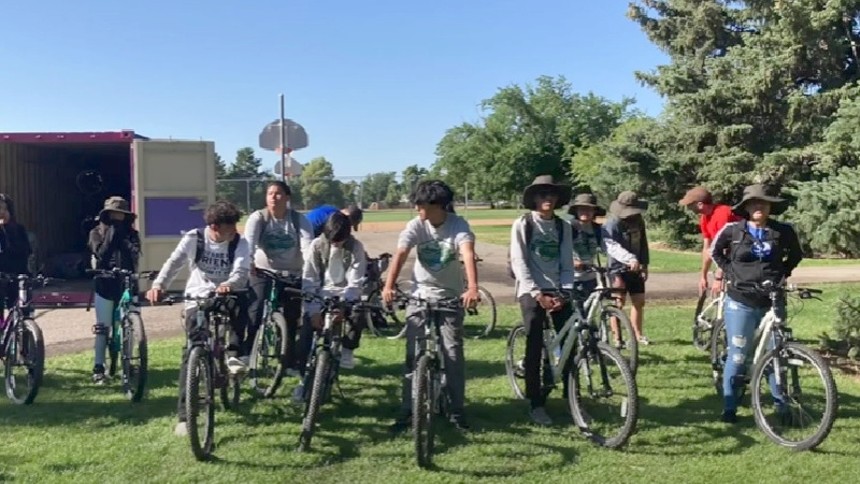 A screen capture from a video promoting the VAMOS Bike Network.
Bikestreets.com via YouTube
"In the early days of the pandemic, driven by a fairly acute need for more public spaces, because the parks were completely overrun and people were desperate to find places to get outside and move their bodies, DOTI created ten of what were, in effect, havens for walking, biking and rolling," Stopper points out. "They did it very quickly, and they did it simply by using no-through-way traffic signs on ten residential streets. And what they discovered was that they dramatically reduced cut-through traffic on these streets while dramatically increasing the amount of people walking, pushing strollers and riding bikes there."

Over time, the Shared Streets concept was allowed to lapse. But in July, DOTI decided to explore the possibility of formalizing the corridors on a long-term basis, and sent out surveys. The first public meeting on the idea is scheduled for this month, with a goal of presenting draft recommendations with priority shared-street locations during the first quarter of 2023.

Denver's comprehensive 2040 development plan mandates expanded access to biking, and as Stopper points out, the Bike Streets Project has assembled "this amazing grid with tons of residential streets that have now been mapped. The VAMOS low-stress bike map has a complete network that's 400 miles — or 800 miles if you count there and back." The Shared Streets program, which used signage, barricades, roadway paint and more, showed that "these treatments are low-cost and quick to install, and you can make refinements based on observations rather than making huge investments in things like poured concrete and then only learning after you've spent years of planning and millions of dollars how people actually interact with them."

Conventional bike-infrastructure methods "are very slow, very expensive and highly polarizing," he continues. "It can take years and years to produce a network that way. The ingredients we already have provide a clear path to a complete network much sooner. But the city has to say it's a go. That's kind of foundational."

DOTI's Lacayo emphasizes that "neighborhood bikeways run along local streets and are important in creating and connecting a complete bike network in Denver. Neighborhood bikeways are essentially shared streets that focus on biking. We use treatments such as traffic circles, and soon we’ll be piloting speed humps to divert vehicles and slow them down to create a more comfortable and attractive environment for biking. We installed our first neighborhood bikeway on West 35th Avenue, and one is being installed now on Garfield Street on Denver’s east side."

A screen capture from a video promoting the VAMOS Bike Network.
Bikestreets.com via YouTube
In addition to using local streets, she adds, "We’re carving out space on our collector and arterial roadways for biking, getting people where they want to go, on the routes they want to take, safely and comfortably using vertical elements to separate bike lanes from vehicle travel lanes," Lacayo says. "Examples of protected bikeways include West 23rd Ave from Federal Boulevard to Fishback Park and the West 13th Avenue/West 14th Avenue circulator route from downtown to Sunnyside. We’re also installing a two-way protected bikeway on Broadway from Seventh Avenue and the Cherry Creek Trail to Center Avenue and RTD’s Broadway Station."

Multimodal improvements of the sort being celebrated at an event taking place at 11:45 a.m. today, October 10, in the green-space area of Broadway between Sixth and Seventh avenues, have been years in the making. "In mid-2018, DOTI committed to installing 125 miles of new bikeways in five years," Lacayo says. "We are on track to meeting that goal by mid-2023, with 107 of those miles already in place. We have two contracts in place to build another 44 miles of new bikeways on 27 corridors in the next year as part of our Community Transportation Networks program. The goal of a CTN is to expand safe and comfortable transportation options, and we’ve been working in central, northwest and south-central Denver. With the community's help, we are building complete transportation networks that are more connected, safe and accessible for Denver residents to walk, bike, roll, take public transit or drive."

Stopper believes the VAMOS network can help make this dream a reality sooner rather than later — and in his view, speed is of the essence. "I think it's important to discuss this in the context of some of the endemic problems we're encountering — among them massive population and the associated traffic congestion," he concludes. "And when there's less traffic on the roadways, air quality improves. Climate change is the big kahuna, and urban transportation is the number-one contributor to emissions. So Denver can set the standard for cities in North America and across the world about how to create an environment where people have a legitimate choice to driving their car."

The first public meeting about a permanent Shared Streets program is scheduled for 5:30 p.m. on October 25; click to register.
KEEP WESTWORD FREE... Since we started Westword, it has been defined as the free, independent voice of Denver, and we'd like to keep it that way. With local media under siege, it's more important than ever for us to rally support behind funding our local journalism. You can help by participating in our "I Support" program, allowing us to keep offering readers access to our incisive coverage of local news, food and culture with no paywalls.
Make a one-time donation today for as little as $1.