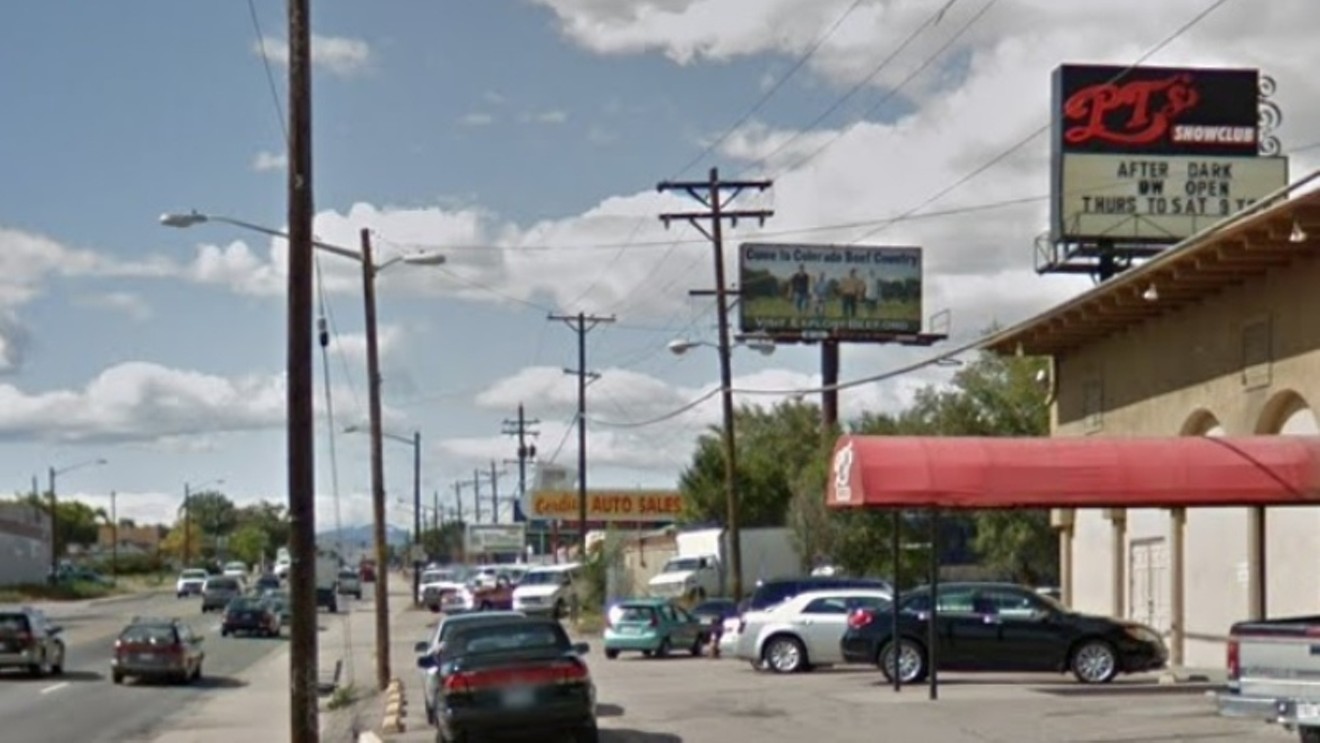 The May 1 shooting took place on the 1600 block of West Evans. Google Maps
More violence flared over the weekend in Denver, including a double shooting in front of a business on the 1600 block of West Evans Avenue during the early hours of May 1. The block, which is home to PT's Showclub at 1601 West Evans, has experienced numerous high-profile crimes over the past decade, and the latest one is linked to the venue as well. A spokesperson for the Denver Police Department reveals that "the incident occurred in the parking lot of PT’s Showclub and the parking lot across the street."

Last week had seen a series of positive developments regarding homicide investigations in Denver. On April 27, the DPD announced the arrest of Innis Lee Collins, 38, for the death of a woman found in a stairwell in the area of East 16th Avenue and Broadway. On April 28, the department revealed that Trahvonie Deshawd Smith, 24, had been busted on suspicion of first-degree murder related to the fatal shooting of a 63-year-old man near La Alma-Lincoln Park. And on Friday, April 29, arrest warrants were issued for Celina Duran, 39, and Manuel Lopez, 34, related to the April 22 death of their three-year-old son after an accidental, self-inflicted gunshot inside a parked vehicle on the 1700 block of South Pecos Street several days earlier. Duran is in custody on a charge of child abuse negligently causing death, while Lopez remains at large.

But these successes were swiftly followed by additional offenses. At 8:12 p.m. on April 30, the DPD tweeted about a shooting at East 20th Avenue and Pennsylvania Street; one adult male victim was transported to a local hospital. And at 4:16 a.m. on May 1, an alert revealed the shooting on the 1600 block of West Evans. Two victims were transported by private vehicle to an area medical facility with injuries characterized as serious.

Two notable incidents took place on the 1600 block of West Evans in 2015. That April, law enforcement officials barricaded PT's Showclub — the former home of the Family Dog, a rock-and-roll venue that played host to legendary acts such as the Doors and the Grateful Dead — after a cleaning crew reported at around 6:15 a.m. that armed suspects had broken into the venue. When SWAT team members entered the building a few hours later, however, no one was inside. Then, in August, one of the club's dancers stabbed a fellow performer.

Nearly four years later, in April 2019, a gruesome beating in the parking lot outside PT's left one person dead and another in critical condition. And Westword's list of Colorado shootings through the first three months of 2022 included a February 26 incident on the 1600 block of West Evans that injured one person.

This post has been updated with a statement from a Denver Police Department spokesperson confirming the location of the May 1 double shooting.
KEEP WESTWORD FREE... Since we started Westword, it has been defined as the free, independent voice of Denver, and we'd like to keep it that way. With local media under siege, it's more important than ever for us to rally support behind funding our local journalism. You can help by participating in our "I Support" program, allowing us to keep offering readers access to our incisive coverage of local news, food and culture with no paywalls.
Make a one-time donation today for as little as $1.