Travel Posters had a soft launch June 24 Katrina Leibee
Visit Denver just reported that the 16th Street Mall was the city's top shopping and entertainment area in 2021, and visitors now have some new places to stop on the mall, thanks to PopUp Denver.

As part of the city's mission to "reimagine downtown," three pop-ups will host grand openings on July 1 on the 16th Street Mall. Tea with Tae, an eco-friendly tea company, and Travel Posters, a company that offers destination-themed posters and other items, actually opened last week;  Image en Mouvement, an art installation that shows digital displays of dancers, will join them July 1.

Two more pop-ups — Guerilla Gardens, a graffiti art installation, and Museum for Black Girls, a gallery and exhibit — are also slated to open sometime this summer, but are behind in the design and approval process, according to Sarah Wiebenson, senior manager for economic development at the Downtown Denver Partnership, which is collaborating with the Denver Department of Economic Development and Opportunity on PopUp Denver.

The pop-up projects were selected in March from a pool of 156 applicants, and each business received $20,000 to cover setup costs at their free spaces in upper downtown, an area that Wiebenson says was hit particularly hard during the pandemic. The tenants are all under a temporary certificate of occupancy with a base of three months, though they could stay open longer.

According to popupdenver.org, the city and its partners developed this project to address "the changing nature of retail, the economic impact of COVID-19, and the potential upcoming impact of the 16th Street Mall reconstruction project."

"For the property owners, what we’re doing is taking spaces that may have been vacant for years and breathing new life into them," Wiebenson says, adding that the project is part of a larger plan to revitalize and reimagine the area of downtown and "bring downtown back better than ever."

The focus for PopUp Denver is "experiential retail," bringing people something they couldn't experience online. Museum for Black Girls, for example, will host art installations that offer photo opportunities.

Visitors to Tea with Tae can put together a unique tea box to take home.
Katrina Leibee

Tea with Tae, which is located at 700 16th Street in a former Starbucks, debuted online in April 2020; it was started by Tae and Rod O'Dorisio. According to Tae, the couple thought a pop-up on the 16th Street Mall would be a unique opportunity to try out a storefront for their business. "It brings a more local aspect," Tae says.

The 16th Street Mall is a special place for them, Rod says, noting that they had some of their first dates there. They hope to make the shop a permanent addition to the community, he adds. In addition to serving teas, the store offers packaged teas from around the world for sale, and gives customers a chance to create bento gift boxes with an assortment of teas.

Travel Posters, located at 303 16th Street in a former Krispy Kreme, has had an online presence for seven years, and also sold posters at festivals and to other stores. Blair Hamill, who'd worked as an art director at the Denver Post, is the artist behind the posters; he has over 250 designs, and has visited every place he's depicted.

His wife, Lauri Hamill, says the two had been looking at adding a retail component to their business for a while when they saw the opportunity to open a pop-up. "We see this as an incubator space for us," Lauri says. For this trial run, they rolled out new products like greeting cards, shirts and calendars that aren't offered online. They also installed a large map, where visitors can pinpoint places they've been. 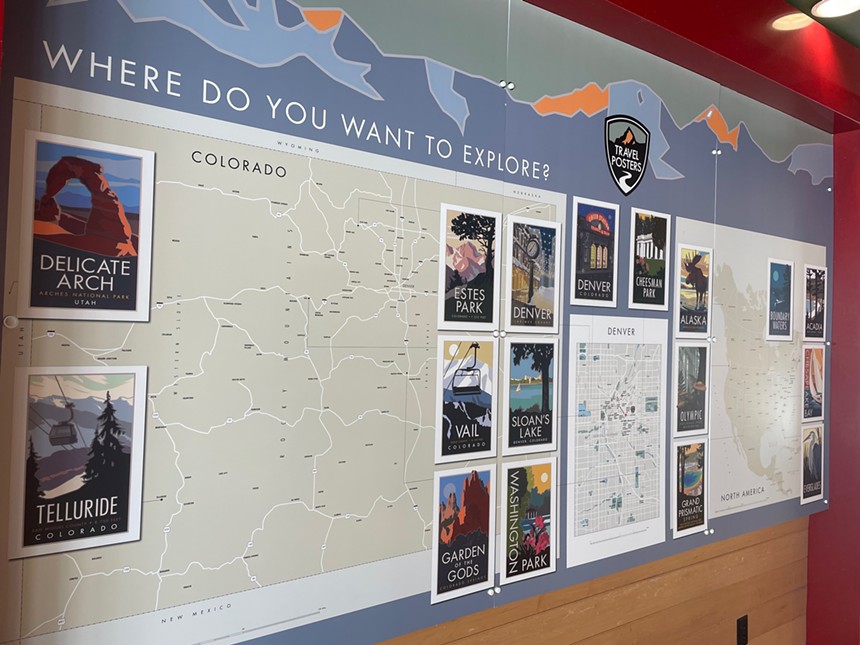 Visitors to Travel Posters enjoy looking at this map and pointing out where they've been in Colorado.
Katrina Leibee
Of the five businesses picked for the pilot project, three are owned by married couples, which Wiebenson thinks could be a COVID trend. "Not only were people dreaming about what they wanted to do, they were also home with their partners thinking about what they want to do together," she says. During the pandemic, people were also inspired to quit their day jobs and finally pursue their dream of opening a business, she notes.

Because of the quick turnaround time, the project didn't accept any restaurant applications, but Wiebenson says it received a number of applications for vintage stores as well as plant shops. PopUp Denver wanted the stores occupying these spaces to bring a unique shopping experience to tourists, with items to take home as reminders of their time in Denver, or as gifts. "When I started with the Partnership, there was a complaint that there weren’t enough places to buy gifts," says Wiebenson, who joined the group last August.

The pop-ups help with that shortage, but another shortage looms: tourist cash.

Longwoods International has been tracking tourism data for thirty years, including Denver stats, and according to its American Travel Sentiment Study, Americans are coping with inflation and rising gas prices by reducing their number of trips and picking destinations closer to home; they're also spending less while on vacation. "We're seeing a growing number  telling us they're going to reallocate what they're going to spend on the trip," says Amir Eylon, president of Longwoods International. "They're cutting back on souvenirs, retail, so maybe a few less T-shirts for the kids, that sort of thing."

This story was updated on June 30 to reflect the change in the official grand opening date from June 30 to July 1 (because of the Avs parade).
KEEP WESTWORD FREE... Since we started Westword, it has been defined as the free, independent voice of Denver, and we'd like to keep it that way. With local media under siege, it's more important than ever for us to rally support behind funding our local journalism. You can help by participating in our "I Support" program, allowing us to keep offering readers access to our incisive coverage of local news, food and culture with no paywalls.
Make a one-time donation today for as little as $1.
Katrina Leibee, a recent graduate of Colorado State University, is an editorial fellow at Westword, covering politics, business and culture.
Contact: Katrina Leibee
Follow:
Twitter: @katrinaleibee