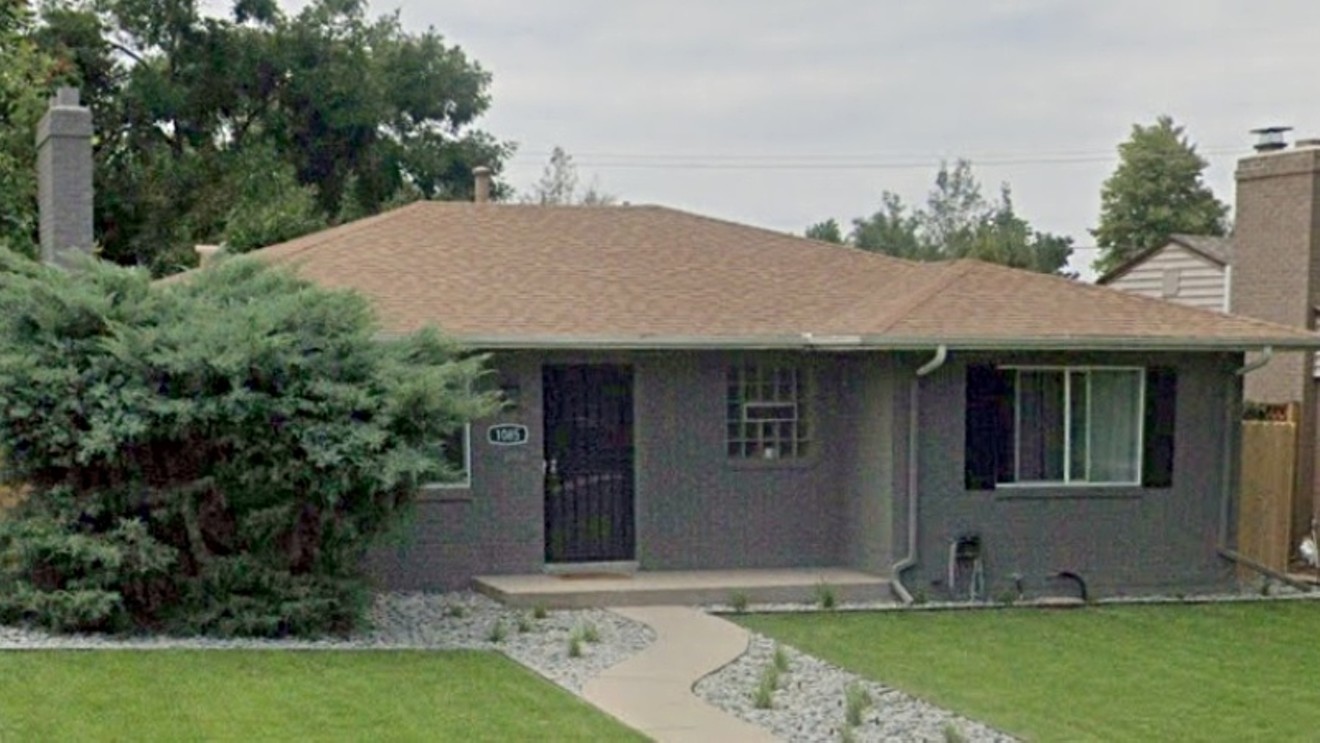 The three-bedroom, two-bathroom, 1,376 square-foot home at 1085 South Harrison Street is currently listed at $780,000, just below the average metro Denver home price last month. The price was dropped $20,000 on July 30. Google Maps
The August report from the Denver Metro Association of Realtors offers some good news for house-hunters — finally. After a long period of bidding wars and rising prices, the average price for a detached home has fallen by more than $25,000, slipping below $800,000 for the first time since March.

DMAR isn't ready to declare the return of a buyer's market quite yet. But the metrics are certainly shifting in that direction.

The survey focuses on greater Denver, an eleven-county zone that includes the core metro counties as well as contiguous areas such as Gilpin, Clear Creek, Park and Elbert counties. In July, the average price for a detached home in this area settled at $781,631, down from the adjusted figure of $807,002 in June. The median price is also incrementally lower: $650,000 in July versus $670,000 in June.

Clues regarding this modest drop can be found in other DMAR stats. For example, new listings in July numbered 4,565, a 19.74 percent dip from the 5,675 in June. However, active listings at the end of the month jumped by more than 20 percent, from 4,684 at the close of June to 5,650 at the end of July, indicating that factors such as rising interest rates may finally be having an effect. Likewise, closed transactions tumbled from 3,799 in June to 3,010 in July.

Such developments are relatively commonplace during the hottest days of summer along the Front Range, and the report's authors see their return as evidence that the market is becoming more balanced. Nonetheless, a graphic from the report built with figures from January 2008 to July 2022 reveals that active listings at the end of the month hadn't exceeded the closings total in two years...until now.

The yellow line corresponds to active listings at the end of each month, while the blue line shows sales that closed over the same periods: 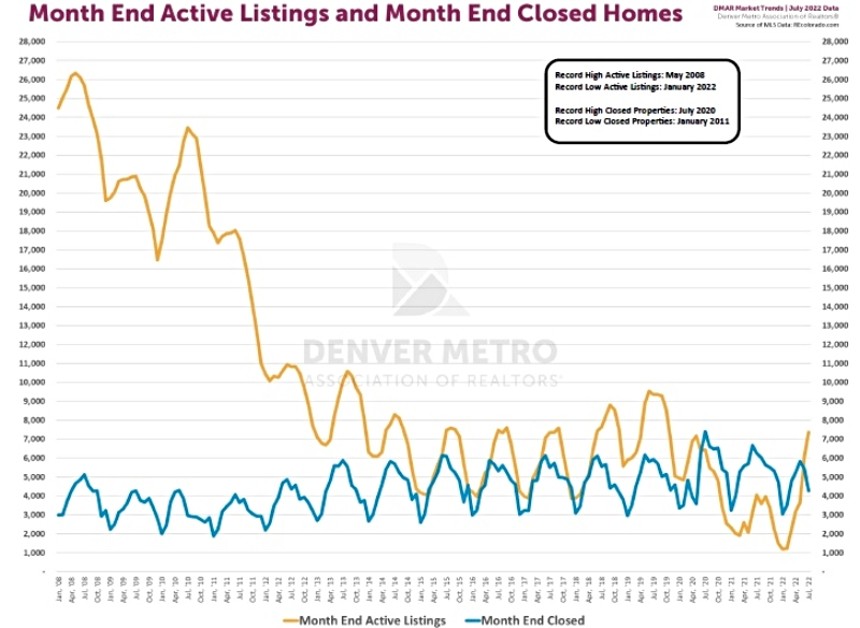 Of course, the average and median prices in July 2022 were still considerably higher than they were at the same time in 2021, by 12.02 percent and 8.47 percent, respectively. But they still reflected a drop over this year's highs.

The average number of days that detached homes lingered on the Multiple Listings Service, or MLS, was thirteen in July, as compared to eleven in June, and the median stay ratcheted from five days in June to seven in July. Meanwhile, the typical price at closing last month was 100.73 percent, just a smidgen over list price.

Colleen Covell, a metro Denver realtor who serves as a member of the DMAR market-trends committee, welcomes these developments. "Just as July gives us some breathing room to travel and enjoy our summer vacations, it brings buyers in the market some breathing room with longer showing windows, more time to consider making an offer, less competition and slowing prices," she says. "Sellers, meanwhile, need to appreciate this shift in the landscape and adjust their expectations. Many homes are not going under contract in the first week, there will be under-asking price offers, and contingencies won’t be waived. Just like it used to be, pre-pandemic! All in all, a return to normal is on the horizon this year."

Click to read the Denver Metro Association of Realtors' August 2022 market-trends report.
KEEP WESTWORD FREE... Since we started Westword, it has been defined as the free, independent voice of Denver, and we'd like to keep it that way. With local media under siege, it's more important than ever for us to rally support behind funding our local journalism. You can help by participating in our "I Support" program, allowing us to keep offering readers access to our incisive coverage of local news, food and culture with no paywalls.
Make a one-time donation today for as little as $1.