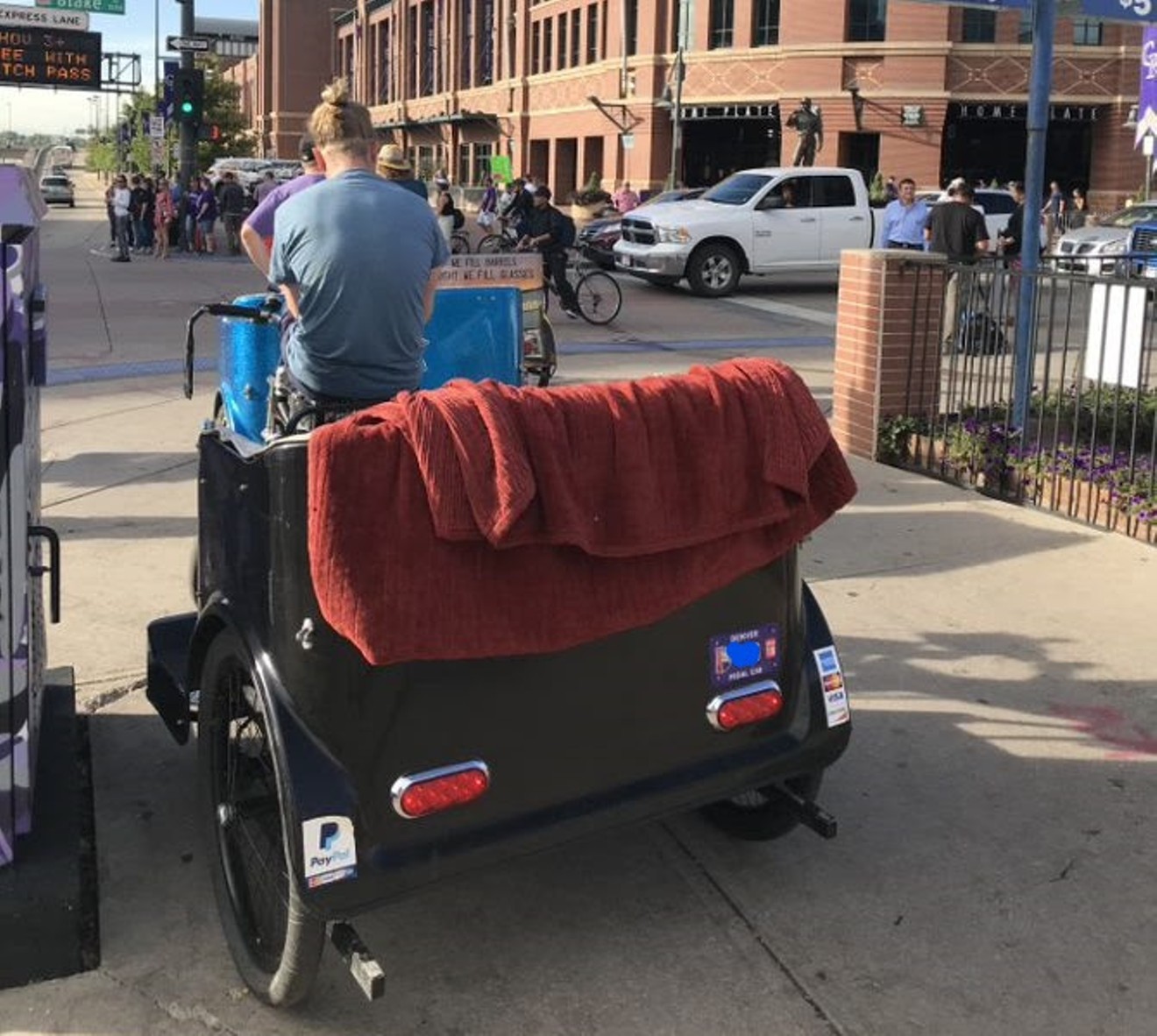 Ready to ride...but where? City and County of Denver
The Denver Department of Excise and Licenses recently announced that the city was doubling the area in which pedal cabs can operate, emphasizing Empower Field at Mile High, RiNo Art District, Auraria Parkway and around Capitol Hill. But at the same time, pedal cabs have been banned from the under-construction 16th Street Mall.

And some pedal cab drivers charge that the city is putting the brakes on them in other ways.

Sammy Kosechequetah, who's been a full-time pedal cab driver for five years, says that the city employs a double standard for rules controlling pedal cabs, as opposed to bikes and e-bikes. "They have free rein and go largely unpoliced while I am confined to a small area to try and make a living, [which is] insulting and degrading," Kosechequetah says.

"At this time, we are not permitted on the mall because of construction, even though the actual construction contains very few blocks," Kosechequetah notes. "This has hugely affected our access to foot traffic, as the mall is the largest area for tourists and shoppers."

Explains Kuhn: "Regarding pedal cabs, city ordinance states that 'The city traffic engineer is to determine appropriate hours of operations and acceptable streets and areas in which pedal cabs shall operate.'"

Again, some drivers think a double standard is at work, since bicycles are not banned from those roads. Instead, Gloekner says in her memo, "We encourage riders to use our bicycle routes/network that are safer to navigate; these roadways are not part of the bicycle network."

The memo also says that pedal cabs must remain in the permissible roadways at all times and are not allowed on the sidewalks, even when loading and unloading passengers.

"The biggest challenge would be doing business while keeping myself and my passengers safe, especially during heavy traffic times," Kosechequetah says. "Many times it is required to conduct transactions, drop-offs or pickups in the streets, sometimes resulting in upset motorists. If we are lined up or conducting business in bike lanes, we are harassed by angry bicyclists who must go through traffic just to get around us." Pedal-cab drivers came out to protest being banned from the mall.
Conor McCormick-Cavanagh
On August 17, the city hosted a gathering on the mall to show the replacement pavers and open an exhibit that will stay up through the construction project; some pedal cab drivers showed up to state their case. Now they're pushing for a meeting with Denver officials to talk about current conditions as well as what the rules will be after the mall project is over.

"No decisions have been made about what happens after construction," Kuhn says. "We will be actively engaging with pedal cab operators in the future to discuss."
KEEP WESTWORD FREE... Since we started Westword, it has been defined as the free, independent voice of Denver, and we'd like to keep it that way. With local media under siege, it's more important than ever for us to rally support behind funding our local journalism. You can help by participating in our "I Support" program, allowing us to keep offering readers access to our incisive coverage of local news, food and culture with no paywalls.
Make a one-time donation today for as little as $1.
Katrina Leibee, a recent graduate of Colorado State University, is an editorial fellow at Westword, covering politics, business and culture.
Contact: Katrina Leibee
Follow:
Twitter: @katrinaleibee