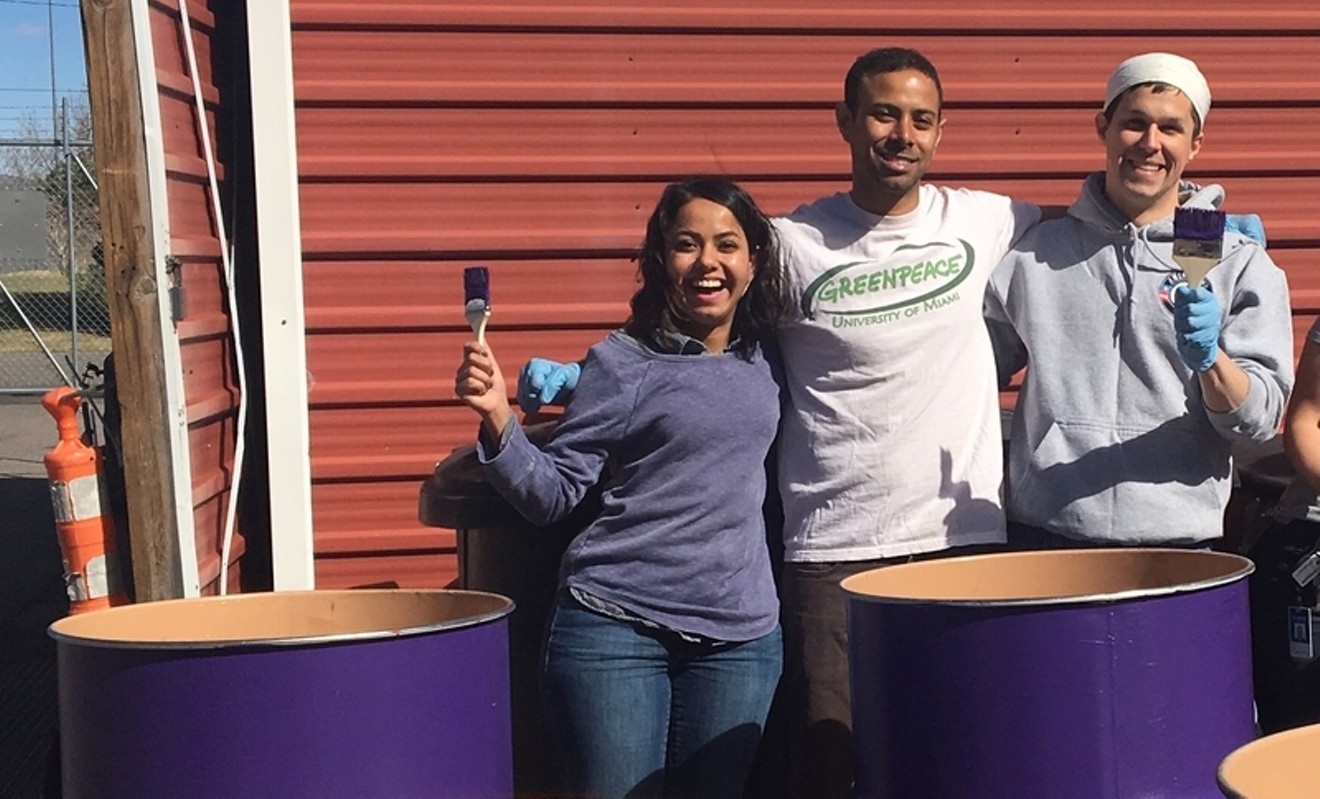 Noor Shaikh, Alejandro Vera and Andy White pause during their bin-painting to pose. Noor Shaikh
Denver loves its parks, which made the absence of recycling bins seem strange to a few do-gooder citizens.

Last fall, the Denver Millennial Political Action Coalition, a small, Facebook-based group “dedicated to helping Denver's community through zero and low-cost activism-based initiatives,” embarked on its first project: the cleanup of a mile stretch of the South Platte River. While doing that job, members of the group noticed a lack of recycling bins along the popular Platte River Greenway. Noor Shaikh, one of the group's members, remembers thinking how inconsistent that seemed given Denver’s liberal, outdoorsy and environmentally conscious population.

While the group later disbanded, that observation lingered. And soon Shaikh and another MPAC member, Alejandro Vera, decided to push for recycling in city parks. Vera, a lawyer for Medicaid, started the process by petitioning the Denver Department of Parks and Recreation to allow a pilot program.

“We got a lot of no's the first time," he recalls. "I think they said no about four or five times. They said, ‘We got it covered, we’re going to take care of it.’ I work for the government, so when someone feeds me that line, I know what it means. I said, ‘Can you show me your proposal?’ and they’re like, ‘Oh, no, we’re not going to show you,’ and I’m like all right, you don’t have one.”

Vera eventually got an audience with Doug Woods, executive director of Parks and Recreation, who gave the group the go-ahead for a pilot program. 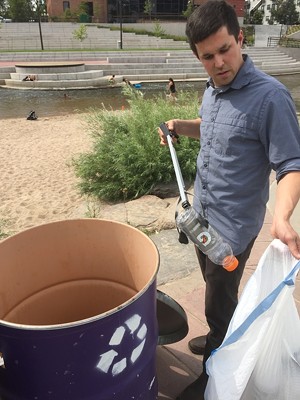 Parks and Rec donated seven bins for the project, and Vera, Shaikh and Andy White, a friend of Shaikh's, painted them purple and stenciled on recycling logos to match the city's official recycling cans. They then placed them throughout Confluence Park, along walking paths and directly across from where the hot-dog stand is often stationed at the end of the Cherry Creek bike path.

Since the start of the bare-bones program, which cost just $400 to set up, the three-person volunteer team has diverted over 3,600 items (or an estimated 500 pounds) from the landfill to a recycling facility.

Along the way, they've had to adapt their strategies. The original bins were open, to encourage recycling larger items, but when liquids began seeping out, they added tops with cup-sized openings. They also moved the bins to areas where people congregate. As White explains, “If someone’s riding their bicycle, they’re not going to slow down to recycle.”

In the process, they've become acquainted with the result of "aspirational recycling," a trend reported by the New York Times. “People will come in here with a piece of garbage and be like, ‘I want this to be recyclable, and I want to recycle so I’m going to recycle it,’ even when it’s not [recyclable],” White explains. This complicates the group’s sorting process, which even under ideal circumstances is rather tedious: With a long-handled grabber, they sift through the contents of the bins, sorting out plastics, glass and aluminum for recycling, transferring waste to the trash.

Occasionally, outliers pop up. While White was on site sorting through the bins recently, he found a wallet. Though stripped of cash and cards, it still held photos, notes and, shockingly, a pair of Social Security cards. Through Facebook, he reached out to the owner, who said she'd lost her wallet on the 16th Street Mall. White wonders whether the thief placed it in the bin in hopes it would be discovered — a rare instance of positive aspirational recycling.

Parks and Rec aspires to do more recycling, too. According to spokeswoman Cyndi Karvaski, the department had “realized for a while that there’s a need for recycling in our parks.” But “trash cans take up about 20 percent of our employees’ time,” she notes, which left little time for recycling. 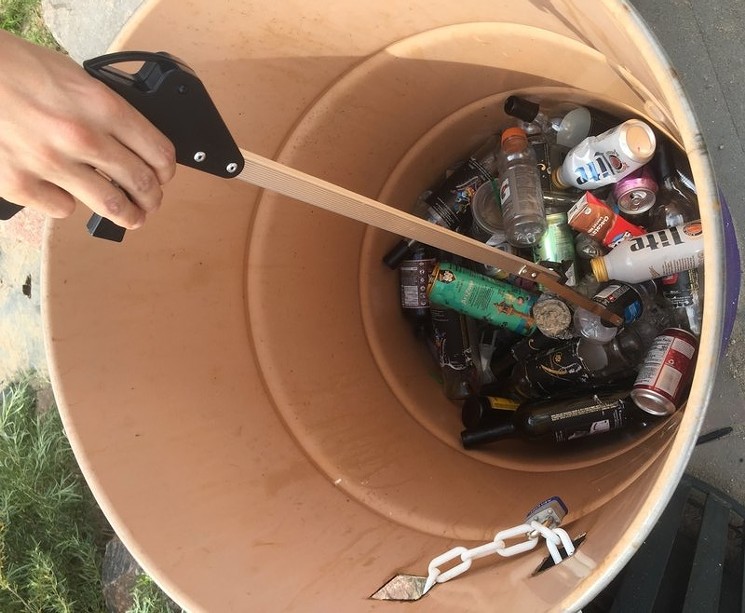 Andy White sorts through trash, looking for items to recycle.
Nick Maahs
Now, though, Parks and Rec is gearing up to launch a pilot program of its own. The department has awarded a $352,000 contract to Broyhill — a Nebraska-based landscaping equipment company — to construct two Load and Packs, a sort of miniature all-terrain garbage truck. Operated by department employees, these trucks will first hit parks in southwest and northwest Denver, picking up only trash at first and eventually expanding to recycling. Specific schedules and locations have not yet been determined, but the department plans to launch the program sometime in November, says Yolanda Quesada, communications director for the department.

If that program is successful, it could cast a pretty large shadow over the Confluence pilot project, which is slated to run through August. Still, the volunteers say they'll welcome the city's expansion of recycling efforts. And in the meantime, they feel like they've managed to do something productive, even if just on a small scale.

“Never doubt that a small group of thoughtful, committed citizens can change the world. Indeed, it’s the only thing that ever has,” White says, quoting Margaret Mead, then continues in his own words: “And, I mean, that’s what we are.”
KEEP WESTWORD FREE... Since we started Westword, it has been defined as the free, independent voice of Denver, and we'd like to keep it that way. With local media under siege, it's more important than ever for us to rally support behind funding our local journalism. You can help by participating in our "I Support" program, allowing us to keep offering readers access to our incisive coverage of local news, food and culture with no paywalls.
Make a one-time donation today for as little as $1.

Nick Maahs is an editorial Intern for Westword during summer 2018. Raised in Denver, he attends Whitman College in Walla Walla, Washington, where he tries to escape his small-town blues by studying English and writing for the student-run paper, The Wire.
Contact: Nick Maahs
Follow:
Twitter: @deermandown