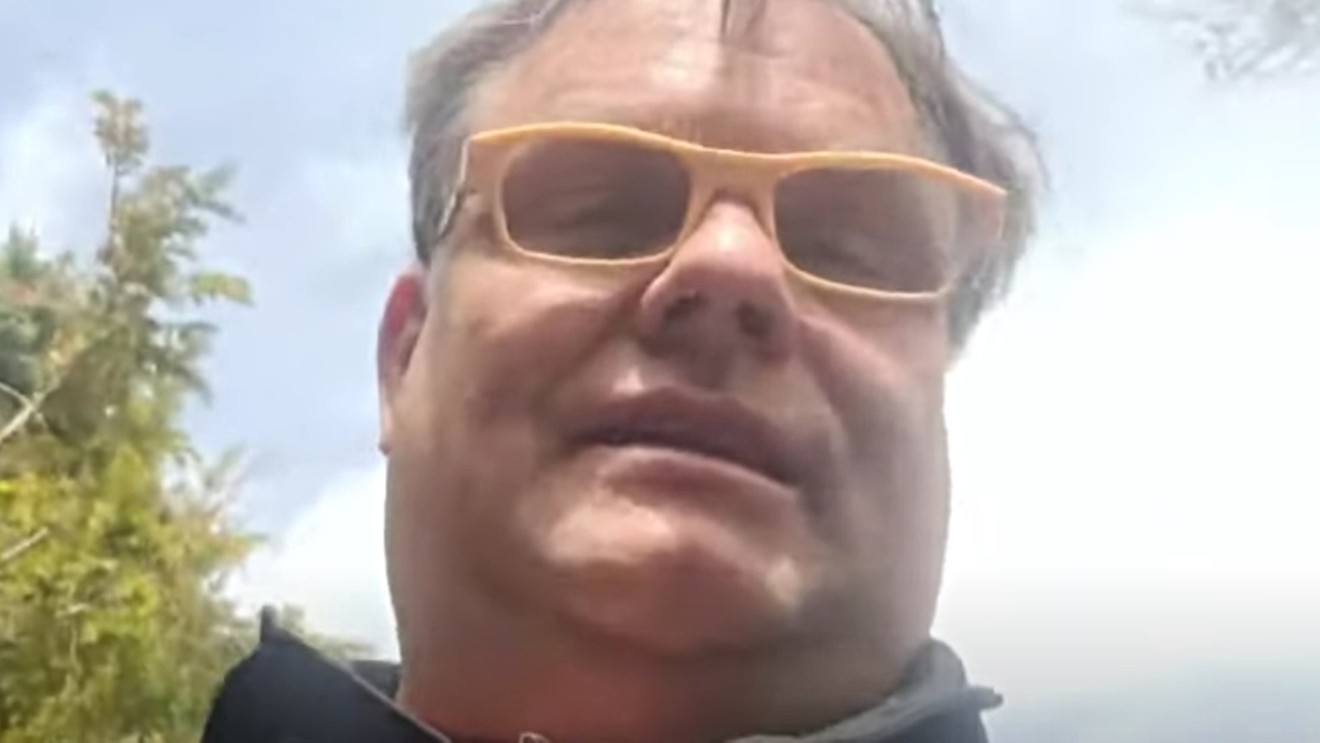 Eric Brandt as seen in a video from his YouTube channel captured an hour before his April 2021 sentencing for threats against judges. YouTube
Eric Brandt's civil-rights complaints have cost governments across metro Denver plenty over the years — and that continues to be the case even though he's currently in prison. On November 28, Denver City Council agreed to pay Brandt $65,000 to settle a lawsuit over his arrest four years ago for shouting "No Justice? No Peace! Fuck the Denver police!" on the 16th Street Mall.

Ironically, Brandt was cuffed for the way he'd chosen to protest the bust a day earlier of activists Brian Loma and Mikel Whitney; they, too, had used variations on the word "fuck" while on the mall. Back in August, the city council settled a suit filed by Loma and Whitney over the incident for $128,000.

Attorney David Lane of Denver-based Killmer, Lane & Newman LLP, who represented Brandt, Loma and Whitney in their various complaints, believes these payouts are directly related to the tender sensibilities of the officers assigned to the area.

"The cops on the mall have been thin-skinned for years," he says. "My colleague, Andy McNulty, calls them 'snowflakes.' Their snowflake-ishness just cost taxpayers of Denver $65,000, and if you add up all the settlements over the years, it wouldn't surprise me if they were over $1 million — because when Denver cops get their feelings hurt, they think they can arrest someone for it."

The sequence of events began on September 23, 2018, when Loma, Whitney and members of Occupy Denver were distributing meals to the homeless on a sidewalk outside Corner Bakery; the business at 500 16th Street had been the target of protests for several months. Demonstrators contended that it supported anti-homeless initiatives such as the urban camping ban — claims the Corner Bakery denied in an interview with CBS4 Denver — and wouldn't allow people carrying multiple bags to use the bathrooms even if they paid for food.

Near the conclusion of the meal handouts, Loma saw what he considered to be "an unlawful practice by the Denver Police Department," he told Westword in August. "They did a flanking maneuver to arrest someone for trespass without providing notice — not saying, 'Hey, you can't be here, do you want to leave or should we arrest you?,' but just making the arrest." Loma responded by loudly declaring, "Fuck the police," after which he was busted for allegedly disturbing the peace — a charge that he says officers tried to countenance by soliciting complaints from individuals outside a nearby restaurant. The same treatment was meted out to Whitney a short time later, after he responded to questions about whether he'd been shooting photos in a public place with the phrase "I did not take a fucking picture."

These events can be seen in the following clip, shared on the YouTube channel operated by Brandt, who was also on the scene. Loma's arrest takes place around the video's three-minute mark.
The next day, September 24, Brandt returned to the mall and used profanities to make plain his disgust at what had happened to Loma and Whitney. "Eric was being himself," Lane maintains. "But instead of arresting him, the cops flagged down a passerby and said, 'Hey, is he disturbing your peace?' And the passerby said, 'Yes.' So they thought, 'Great, now we can arrest him, because it's not our feelings being hurt. It's a passerby's feelings being hurt.'"

The problem with this approach, Lane points out, "is that it violates the First Amendment. Your right to free speech doesn't depend on the biggest snowflake in the vicinity."

Brandt initially filed his own lawsuit against Denver over the arrest, and it was still pending in April 2021, when he was found guilty of threats against judges. According to the Denver District Attorney's Office, he'd left the following message about one jurist: "It is my thought that the judge should be violently murdered and his brains splattered all over the face of his children. And it’s my prayer that some [expletive] actually does it. Kill, kill, kill, all judges should die." And in a video, he opined that the judge would "look best hanging from a tree."

Brandt eventually pleaded guilty to three counts of retaliating against a judge and received four-year sentences for each, running consecutively, for a total of twelve years in stir plus two years' probation. According to the Colorado Department of Corrections, he's currently residing at the Trinidad Correctional Facility and isn't available for parole until January 2026.

Asked about the sentence handed to Brandt, Lane replies, "There is no doubt that Eric has been harassed by the police over many, many years, and he has collected hundreds of thousands of dollars from them over many, many years. I wasn't involved in his criminal case, so I can't render any opinion on whether it was a fair and just conviction. My experience, though, is that a fourteen-year sentence for saying words is incredibly excessive."

In November 2021, with Brandt behind bars, Lane's firm took over his lawsuit regarding the 2018 arrest, resulting in this week's settlement agreement. Lane sees the deal as evidence that Denver hasn't learned its lesson when it comes to free speech. "If one cop would miss one paycheck and get suspended for one week for violating the Constitution, this kind of taxpayer burden would be lifted," he says. "But the city council keeps wringing their hands, clucking their tongues and signing checks."

Click to read Brian Loma and Mikel Whitney v. the City and County of Denver, et al. and Eric Brandt v. the City and County of Denver, et al.
KEEP WESTWORD FREE... Since we started Westword, it has been defined as the free, independent voice of Denver, and we'd like to keep it that way. With local media under siege, it's more important than ever for us to rally support behind funding our local journalism. You can help by participating in our "I Support" program, allowing us to keep offering readers access to our incisive coverage of local news, food and culture with no paywalls.
Make a one-time donation today for as little as $1.