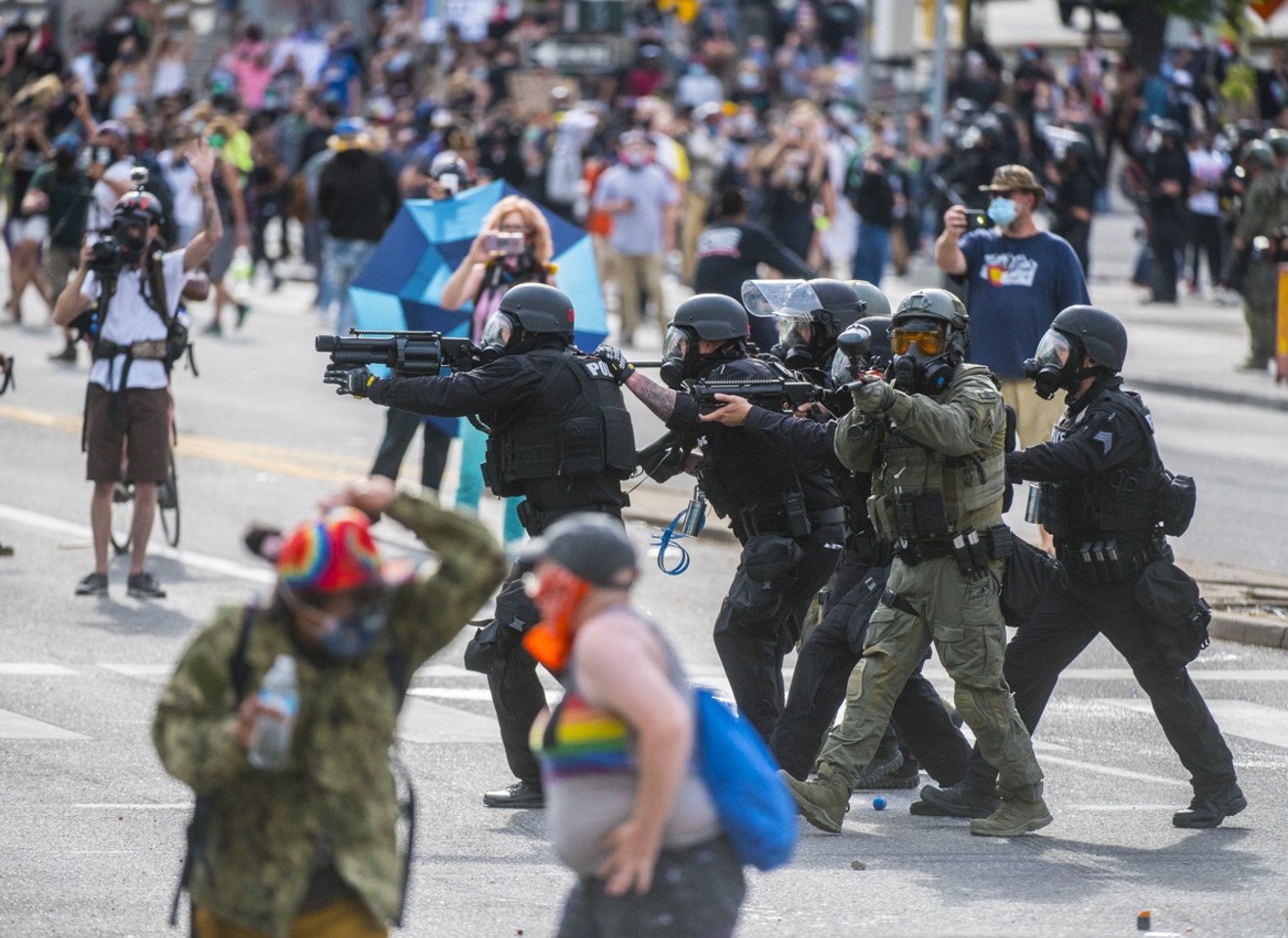 Legal troubles related to the George Floyd protests have added up for Denver. Evan Semon Photography
Even after a federal judge sharply criticized the way that law enforcement officers were dealing with protesters in late May and early June, the Denver Police Department is not abiding by a use-of-force agreement brokered with that judge, a lawyer suing the city charges.

"I hope they really do take it seriously," says Milo Schwab, an attorney who helped strike the deal with the City of Denver that limits law enforcement's use of force during protests. "These are pretty fair restrictions and have been negotiated to both protect the police’s ability to do their jobs and protect themselves, while also protecting the public and also the protesters."

On July 27, Schwab filed a motion in the U.S. District Court of Colorado, claiming that Denver had violated the terms of that agreement on two days in July. The motion cites multiple instances of law enforcement officers not wearing body cameras while interacting with protesters in Denver on July 1 and again on July 19, even though the terms of the agreement require them to do so. Additionally, Schwab's motion notes instances of officers allegedly misusing less-lethal force against protesters.

This case dates back to June 4, when Schwab and other attorneys representing four individuals who had been present at early Denver protests filed a lawsuit against the City of Denver, alleging that law enforcement officers had used excessive force against protesters.

A day later, Judge R. Brooke Jackson of the U.S. District Court of Colorado issued a temporary restraining order limiting the way that law enforcement dealing with demonstrators in Denver could use less-lethal force, such as tear gas and pepper spray.

On June 26, as that order expired, Denver and the plaintiffs were able to strike an agreement that generally reiterated what Jackson had put forth, with a few compromises. Days earlier, Colorado Senator Julie Gonzales had inserted language from Jackson's order into the police reform bill then going through the state legislature, in an effort to codify rules regarding law enforcement's use of less-lethal weapons across Colorado. The agreement between Denver and the plaintiffs specifically pointed to Senate Bill 217, by now state law.

But while Schwab says there has been "a lot less police violence since the temporary restraining order went into place" and police "don't respond as wildly as they did before," he notes that there have been alleged violations.

The motion's exhibits include pictures and a video that appear to show officers not wearing body cameras at two protests in July, which would be a violation of the terms of the stipulated agreement. There's not much room for confusion there, unless the cameras were located on a part of the body other than the chest. But even that would raise questions regarding why the cameras weren't where they belonged. Body cameras are also required under SB 217.

The court filing also contains videos and pictures documenting two instances of police using less-lethal force against protesters, though there's more ambiguity regarding these exhibits and whether they show actual violations of the stipulated agreement.

In a video from a July 19 protest, a young man bumps into a police officer who is part of a line of law enforcement authorities who appear to be moving from one section of Civic Center Park to another. With protesters to his back, the officer pushes down the man who's walked into him and then quickly pulls out a can of pepper spray and deploys it, spraying both those who were behind the police line and others in a 270-degree area.

"The officer then starts running after protesters who are retreating or were never near the officer when his attack began," the motion asserts. "This officer attacked many demonstrators without any specific act of violence or destruction of property, and certainly without an act of violence or property destruction by each and every individual this officer attacked with chemical agents."

The motion also includes a video exhibit that shows police firing pepper balls at protesters on July 1. "Denver Police were targeting heads with pepper ball bullets," the motion charges; it includes photos showing a man who was allegedly shot in the face and a woman who was hit in the neck. Under the new police reform law, it's illegal for police officers to aim at the head or neck of protesters when firing less-lethal munitions.

The city has not yet filed a response to the motion, and the Denver City Attorney's Office declined to comment on the case.

While the litigation between the protesters and the City of Denver could last years, a ruling on this motion might come much more quickly. And this lawsuit is just one of many headaches that Denver is dealing with regarding law enforcement conduct at the protests that erupted after George Floyd's death, as the city is also facing a class-action lawsuit filed by Black Lives Matter 5280 and a handful of other plaintiffs.

The Denver Office of the Independent Monitor is currently investigating how police responded to the protests, which have cost Denver at least $6.4 million in law enforcement expenses.