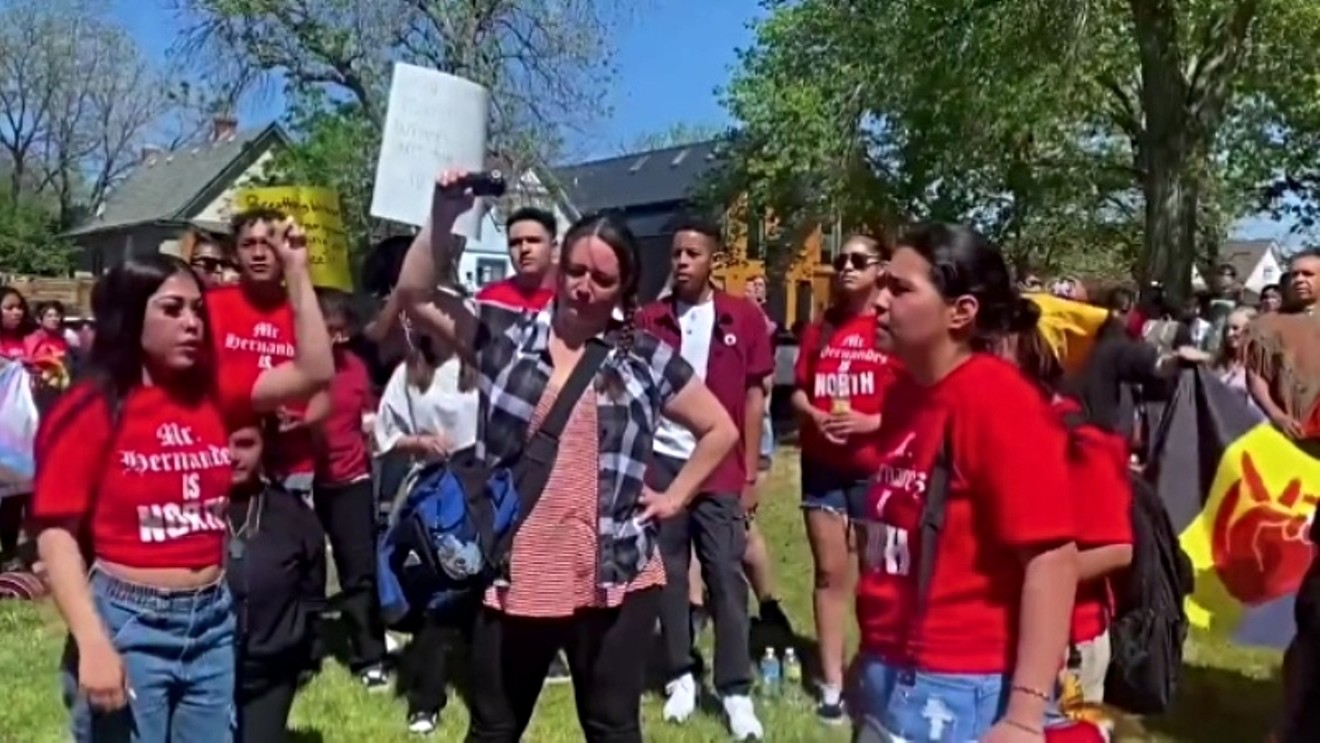 A scene from the May 13 protest on behalf of Tim Hernández. Twitter
If Denver Public Schools officials thought that putting associate teacher Tim Hernández on administrative leave — reportedly for attending a May 13 walkout protesting his ouster from North High School — would quell outrage among students, their families and community members, they were wrong. And this time around, DPS is the unmistakable target of frustration over the situation.

A new walkout is scheduled for 10 a.m. today, May 19, and is expected to include students from additional schools upset about the dearth of BIPOC teachers within the Denver school system. The destination of the march, which is set to begin at Viking Park, 2801 West 29th Avenue, is the Emily Griffith campus at 1860 Lincoln Street, where DPS's offices are located.

"We're going to demand a meeting — and demand that Mr. Hernández get his job back," says Nayeli López, one of the rally's student organizers. Later today, Hernández supporters plan to return to the location to attend a Denver Public Schools Board of Education meeting scheduled to get underway at 4:30 p.m., with a public-comments opportunity set for 5:45 p.m. "We're going to let them know this problem is about more than Mr. Hernández," she notes. "This is district-wide."

This opinion is shared by Rachel Haecker, executive director of the Denver Classroom Teachers Association. "The majority of students in Denver are students of color, and more than 50 percent of them are Latino," she told Westword earlier this week. "But the percentage of Latino teachers doesn't come close to that. I think it was around 18 percent of educators at the beginning of the school year, and I'm pretty certain that number has shrunk, because we lost a lot of teachers this year for various reasons. And whenever we lose a teacher of color, it means fewer teachers in the classroom that students in a minority group can identify with."

Hernández declined to comment on today's rally, but before the May 13 demonstration, he went into detail about his time at North. He was hired as a traditional teacher in January 2021 and quickly became a student favorite, he said, but at the end of his first year, he was told the school didn't have enough money to pay his salary — so he was encouraged to apply for a one-year associate position, "where the government pays for half of it and the school pays for half of it." As this term was nearing its conclusion, he applied for one of several open teaching positions at North, but was told afterward that he hadn't been hired for any of them because of a subpar interview — an excuse he didn't buy, since he'd successfully interviewed at the school twice in the previous eighteen months. Instead, Hernández said, he believes that he was bounced because "I openly challenge my principal on issues of equity and anti-racism." 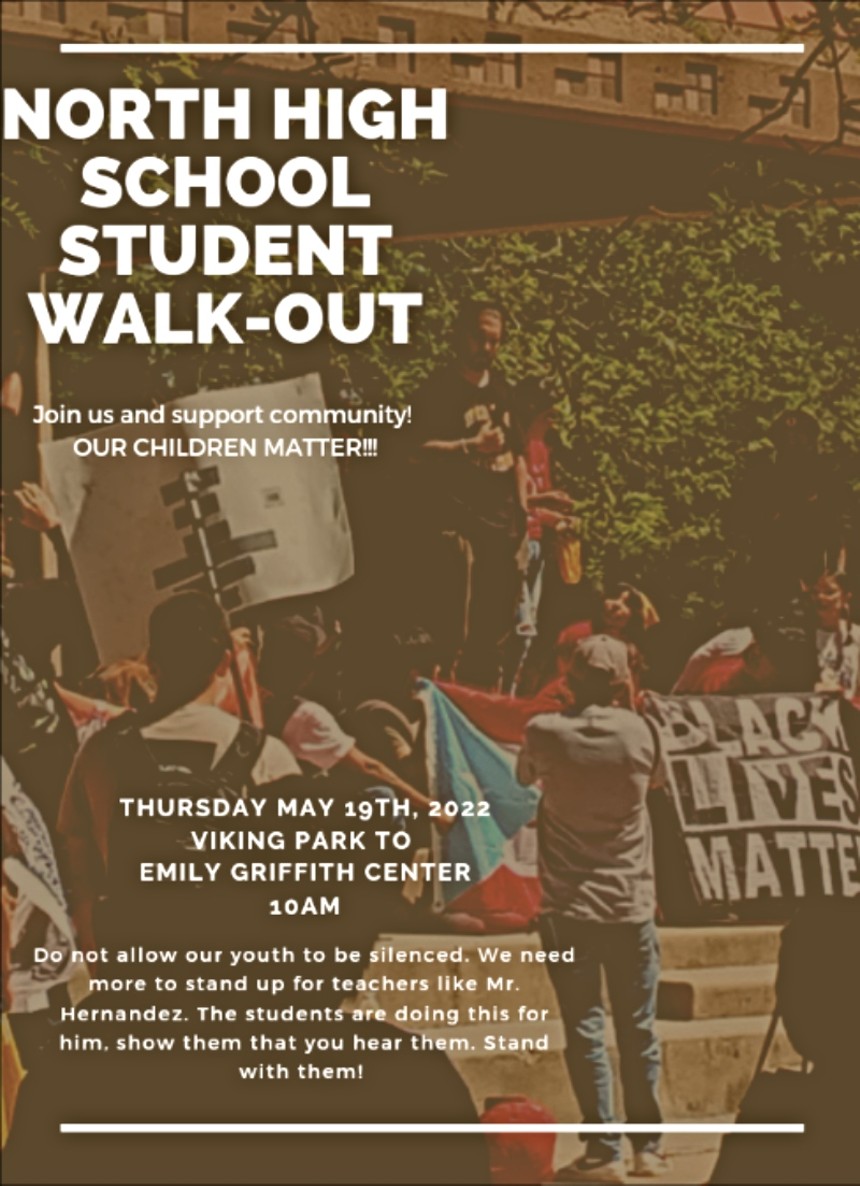 A graphic with details about the May 19 protest.
Special to Westword
North High School Principal Scott Wolf won't talk about specific employees. But in a statement to CBS4 Denver, he said: "Through an equitable process that is the same for all candidates, the hiring committee conducts interviews, reviews applicant materials, and ultimately hires the candidate they believe is best suited to meet the needs of the position."

What hasn't been mentioned in most coverage of the Hernández matter is that Wolf won't be returning to North High School next year — and the decision was made well before the current controversy. In a statement to Denver North Star published on March 14, Wolf said: "I am choosing to step away from North after nine years because I believe that North has never been about me, but it has always been about the people — the students, the staff, and the community — and I am confident in the foundation that has been laid for North to continue to shine."

According to López, around this time, she was among a group of students who told Wolf about their concerns regarding other BIPOC teachers leaving North. "It was sometime in mid-March, I think, and we met with Mr. Wolf, the vice principal and some administrators," she recalls. "And they said the same words over and over again: 'I'm here for you. I hear you. I'm listening.' But if the administration was listening, we wouldn't be where we're at right now. It seems like every time we speak out, they do something worse."

The decision to put Hernández on administrative leave for the remainder of the academic year "has made students a hundred times more frustrated," López maintains. "That's why we're walking out. We have our voices pushed aside, no matter how loud we are. The school always says they're inclusive and stuff like that, but if they were inclusive, we wouldn't have so many teachers stepping down because of racial trauma."

As for Hernández's departure, she says, "It's displacing kids from their safe person. Mr. Hernández is someone I can talk to, a trusted adult. And with all this stuff happening, it's not just me losing a teacher. It's me losing my trusted adult."

The lack of faith in both DPS and North's administration was a major motivating factor behind the latest rally, says López, who calls it "an emergency walkout, because I honestly feel like it's an emergency. Kids are upset, and so am I. As a Chicana who grew up on the north side, Mr. Hernández is someone who fully represented me — and he was one of the only teachers in my entire education with DPS that did."

Click for more information about today's Denver Public Schools Board of Education meeting.
KEEP WESTWORD FREE... Since we started Westword, it has been defined as the free, independent voice of Denver, and we'd like to keep it that way. With local media under siege, it's more important than ever for us to rally support behind funding our local journalism. You can help by participating in our "I Support" program, allowing us to keep offering readers access to our incisive coverage of local news, food and culture with no paywalls.
Make a one-time donation today for as little as $1.