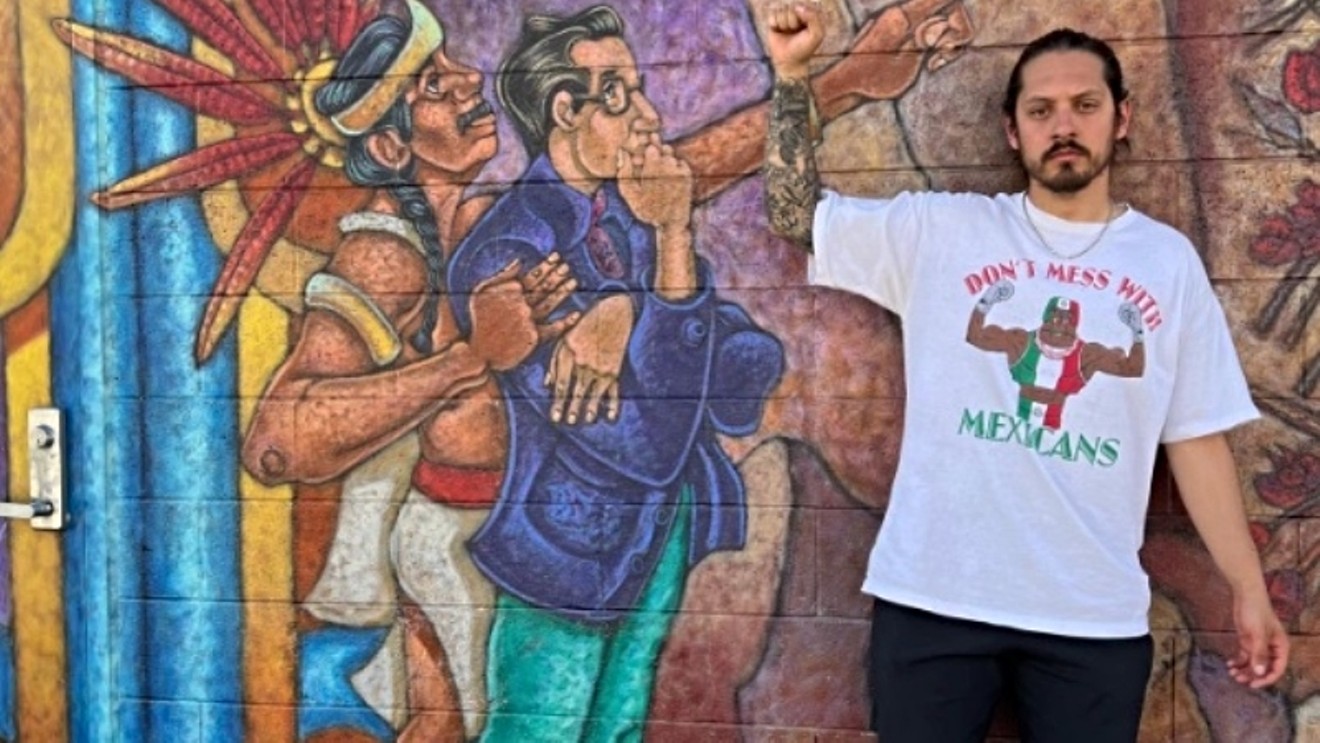 A portrait of Tim Hernández. Courtesy of Tim Hernández
At 8:30 a.m. today, May 13, a student walkout is planned at North High School to protest the decision not to retain teacher Tim Hernández — a decision he feels has everything to do with his belief in speaking truth to power.

"I was let go for retaliatory reasons," he says. "I openly challenge my principal on issues of equity and anti-racism."

North's principal, Scott Wolf, has declined to comment about specific employees. But in a statement to CBS4 Denver, he said: "Through an equitable process that is the same for all candidates, the hiring committee conducts interviews, reviews applicant materials, and ultimately hires the candidate they believe is best suited to meet the needs of the position." And Denver Public Schools has backed Wolf, with a spokesperson noting that Hernández's associate-teacher position was only guaranteed through the end of the current academic year.

Hernández's response? "The district can say whatever placating, semantic bullshit they want about my position being temporary. But every associate teacher at North who wanted to stay at the school has been able to, and nothing proves why I haven't been given the same opportunity. I've scored above effective as a teacher. My student-perception surveys are 5 to 10 percent higher than the school average. I have a signed letter of endorsement from my department. But I was still let go."

Hernández stresses that he has played no role in the planned walkout, and he'll be teaching when it takes place. But in general, he says, he supports "my students making their voices heard in whatever way they want to be heard."

Here's how Hernández tells his story:

"I was hired at North High School in January 2021 as a traditional teacher, which means my entire salary was paid for by the school," he begins. "At the end of last year, they said they didn't have the funding to pay for my salary, so they asked me if I would apply for an associate position, which costs less for the school. It's funded like a work-study, where the government pays for half of it and the school pays for half of it. So I took a one-year associate contract, which is utilized for young teachers so they can teach fewer classes and do more development — and I did it after consulting with many people from the school, who told me North has a deep history of hiring associate teachers."

Given the one-year length of the contract, "I knew I'd have to reapply," Hernandez says. "But four people had left my department at the semester, and as a result, their positions opened up for this year and the next year. So I applied for an open position on February 16. But I didn't receive an interview until April 26. I had to sit on my hands for two and a half months, and I was never communicated with about a timeline. I asked if I needed to find another job, to which they responded, 'Hang in there. We'll get to you by the end of the month.'" 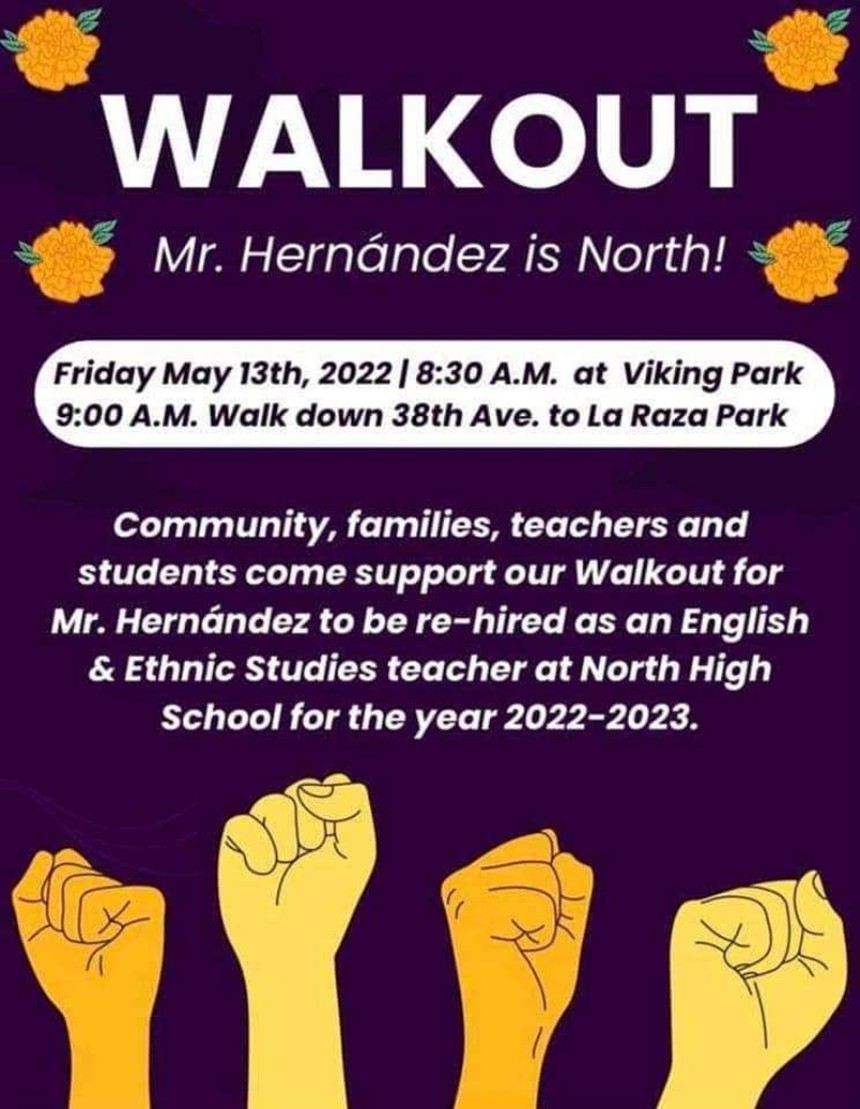 A graphic with information about the planned North High School walkout.
Special to Westword
The week after the interview finally took place, "I was sent a five-minute calendar invite and went to the meeting," he recalls, "and they told me that because of the competitive candidate pool, I wouldn't be returning the next year. I asked why, and they said it was because I hadn't interviewed well."

That excuse doesn't hold water for Hernández, since he'd successfully interviewed for a job with North twice previously (once for his initial gig and again for the associate teacher role), and he felt the most recent sit-down had gone every bit as well as the earlier two. And then there was "all the work I'd done throughout the school year," he points out. "I've taken students on college trips fully funded by the college. My students wrote and created an original book of photographs and poems about how they experience gentrification as Latinx students that's been interred at the Denver Public Library. They also read it on the floor of the State Capitol when we were invited by the Colorado Latino Caucus. We also operate a community fridge for students who are experiencing food insecurity, and none of that do I get paid for. And I teach the only sections at our school on Latinx literature and leadership — courses that I designed."

With so many instructors leaving the education system right now, Hernández knows he could probably get hired in another district. But he grew up in the area, and says he considers "what I do at North a duty, not a job. I connect well with my students because I look like them, I talk like them, I dress like them. And I don't just teach in this neighborhood forty hours a week and leave. I live here, which means I'm a teacher all the time. I see my students at the grocery store and the Target and the Walmart and a lot of other places, because I'm a community member."

DPS is suffering declining enrollment that's led to talk about potential school closures, and the district recently announced that it's eliminating 76 central office jobs — a move estimated to save $9 million. "What's happening at the internal office is something I kind of agree with," Hernández acknowledges. "I'm never in favor of people losing their jobs, but I am in favor of dollars getting to our classrooms rather than our administrative buildings."

Still, he continues, "what's happening to me is a much bigger issue. There are hundreds of BIPOC teachers that have been pushed out of our district for the same reason I am — because they're outspoken and unapologetically Black and Brown. The district talks about how much money it spends on equity, but my salary is $45,000, and everything I bring to students when it comes to equity and liberation is free."
KEEP WESTWORD FREE... Since we started Westword, it has been defined as the free, independent voice of Denver, and we'd like to keep it that way. With local media under siege, it's more important than ever for us to rally support behind funding our local journalism. You can help by participating in our "I Support" program, allowing us to keep offering readers access to our incisive coverage of local news, food and culture with no paywalls.
Make a one-time donation today for as little as $1.