Ten Resolutions for Denver in 2022

Denver's hopes for the new year are a mile high. Pixabay
Denver might be a great place to live, but this city has a ways to go in certain areas. That’s true both in terms of geography — facing the legacy of redlining, for example, is something that most metropolitan centers have to reconcile, and the Mile High City is no exception — and in terms of issues facing us to which we've turned a purposefully blind eye.

In other words: We love Denver, but we can and should make Denver better. That's the opportunity and obligation of citizenship. Those clean streets and potable water and police, fire and emergency protection bring a duty not just to maintain the city, but to consistently improve. It’s like Spider-Man says: With great power there must also come great responsibility.

Here are some ways our Queen City of the Plains can improve in 2022:

Extend the L Line to connect with the A Line
We should be expanding commuter rail consistently to reach all parts of the city, but this spur of the system was the first opened when mass transit brought the trains back to Denver. Promises were made then about the L Line (then just the north end of the D Line), and made again when the A Line was established. The connection was supposed to have been completed by 2017, but various issues kept it from being prioritized; after all, redlining dies hard in Five Points, and the streets along Welton and Downing that should have seen the train offering access are still lined with vacant storefronts and some hope that things will get better. There’s a petition demanding the promises of connection be kept; petitions are a good start. Now let’s see some action. 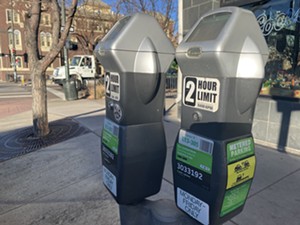 Catie Cheshire
Use the Parking Meter Price Jump to Make Parking Less Necessary
Fine, sure, double the price on the city’s parking meters. But let’s put that revenue to good use — by making it easier for Denver residents to choose not to drive in the first place. Improve bike paths and sidewalks, fund our faltering mass transit options, encourage walkable neighborhood improvements, that sort of thing. Don’t just fill the coffers; do some public good. Show people where their taxes and fees are being spent so no one can grumble about it. Or so we can grumble less, anyhow.

Keep Sharing the Streets
One of the few good policy-related things to come out of the ongoing COVID crisis was the Shared Streets Initiative, which sought to encourage social distancing by allowing bikers and pedestrians more access to the driving lanes. It proved to be so popular with Denver residents that the city plans to extend it, and look into other areas where it might make sense. That's a step in the right direction for a city already dealing with congestion: Motivating people to embrace alternative transportation is one of the ways to limit city traffic overall.

And Keep Us Dining Al Fresco
Another positive outcome of the pandemic — our ability to enjoy our favorite restaurants and bars in the open air. What started as a temporary measure is being made permanent policy, and the program will roll out more fully in 2022. What’s been good at helping to limit personal exposure to the virus has also been good at supporting a dining industry that’s been in sore need of help, by letting restaurants serve patrons outdoors. For a place with a supposed 300+ days of sunshine, it makes sense — and many Coloradans prefer it outside even when it’s cloudy. The biggest proponents of this policy? Dogs. Sadly, their lobbying efforts have proven sort of nonexistent.

Do Something About Denver International Airport
Denver International Airport wasn't just the third-busiest airport in the world in 2021, it was also — perhaps not coincidentally — the third-worst in terms of on-time departures. Despite this past year being the original target date for full completion, DIA only saw the finish line of Phase 1— and a possibility that there’ll be a Phase 3 now, too. So welcome back, construction chaos, and hello, long security lines. Here’s hoping by some miracle we’re not still talking about this in 2025.

Michael Emery Hecker
Address — Really Address — the Homeless Issue
No more namby-pamby half-steps. There are people suffering and dying on our streets, in our parks and alleys. This isn’t political — or shouldn’t be, at least. Every damn theology in the world preaches the sincere care of our fellow human beings; it's time we live up to that, whether we’re religious or not. Denver could be a national leader in providing solutions for the homeless — something Mayor Michael Hancock is reportedly eager to accomplish in his last eighteen months, with the help of his Department of Housing Stability and a Strategic Five-Year Plan to lift people out of the homeless trap.

Place Temporary Signage for Street Sweeping
It's Denver's monthly curse from April through November: street-sweeping ticketing. And it's something that city workers should place reminders for, on the days when they want to clear a block. If the city can do it when they have to trim a tree or work on a construction project, they can do it on the regular along the streets where residents will be ticketed if they forget that it’s that one day a month they can’t park where they normally park. Some good-hearted citizens do this voluntarily, which is good karma for them — and thanks to whoever you are. But when the city doesn’t bother, it makes it seem like a revenue opportunity, which isn’t the point of the program. A little kindness goes a long way toward encouraging citizenship.

Make Municipal Broadband Happen
The pandemic not only made all of us work and learn from home — it also pointed out the simple fact that internet access isn’t a luxury. It’s a resource that should be easily available to every household — or so Denver voters said in approving ballot measure 2H in the 2020 election. But that didn’t settle the issue; it only opened the doors for the city to create a city-sponsored internet option. Which is a door that Denver needs to walk through, for the benefit of every one of its citizens.

Give Raises to K-12 Teachers
Another thumbs-up from voters in 2020 was for 4A, which called for an increase in property taxes to pay for salary increases for the hardworking educators of Denver, who both need and deserve cost-of-living raises, a higher-than-minimum-wage for staff positions, and new hires for important health-related support roles. The pandemic brought us to finally define teaching professionals as “essential workers,” as they always have been. Let’s not forget that when (and if) this crisis ever ends.
Mile High Peace, Goodwill to All
With some unrepentant Scrooge-like exceptions — most of them shouting loudly online from the supposed safety of a keyboard — we can all agree that there’s been too much animosity between us and our fellow citizens with whom we might disagree on some issues. But as James Taylor says in his song “Shed a Little Light,” it’s important to remember: “That we are bound together/In our desire to see the world/Become a place in which our children/Can grow free and strong.” Shed a little light in this new year, Denver. Because we are bound, and we are bound.
KEEP WESTWORD FREE... Since we started Westword, it has been defined as the free, independent voice of Denver, and we'd like to keep it that way. With local media under siege, it's more important than ever for us to rally support behind funding our local journalism. You can help by participating in our "I Support" program, allowing us to keep offering readers access to our incisive coverage of local news, food and culture with no paywalls.
Make a one-time donation today for as little as $1.