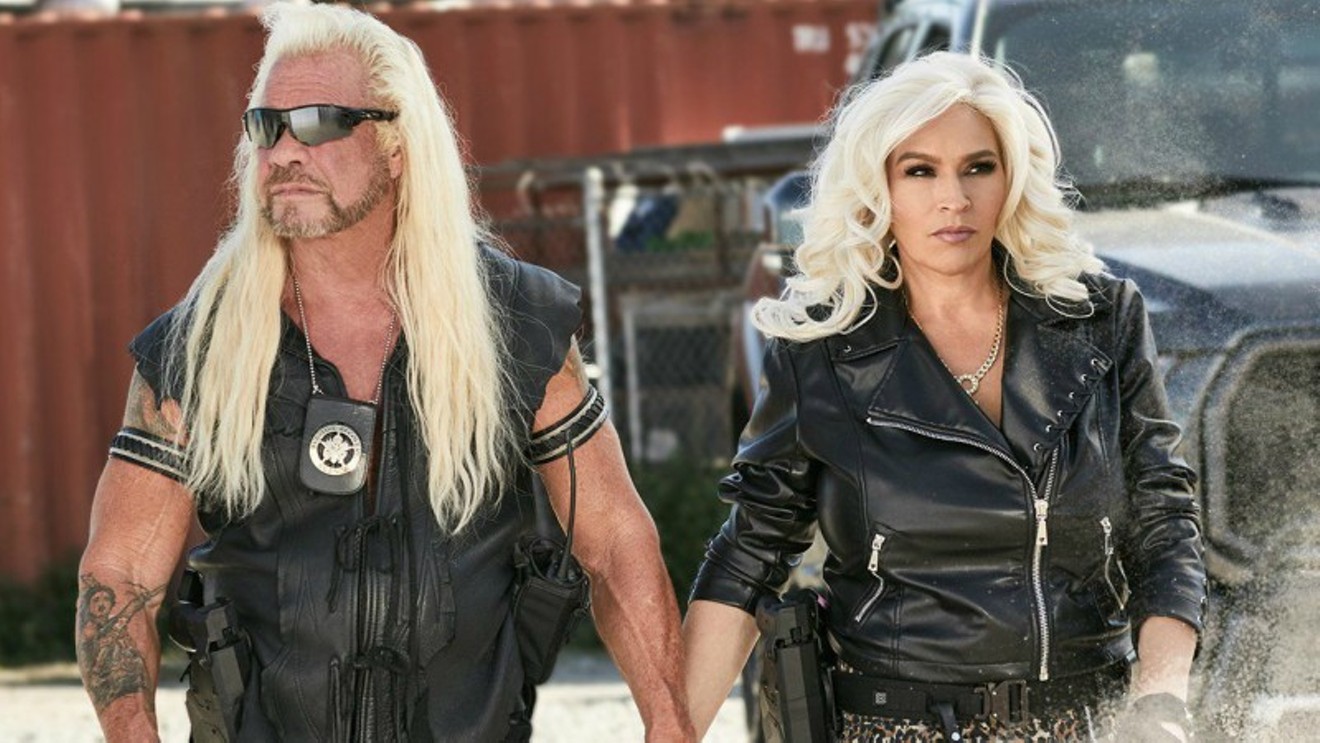 Duane "Dog" Chapman and Beth Chapman in a promotional photo from Dog's Most Wanted. WGN
Dorsey Pictures, the production company behind Dog's Most Wanted, the new reality series starring Duane "Dog" Chapman that's slated to premiere early next month, is growing so rapidly that it's just made a deal to move its executive team and a staff estimated at 100 employees into a new high-tech space.

The location? Not Southern California, even though the firm recently secured new offices in Burbank, too, but Castle Rock, a Colorado community that has never previously been confused with Hollywood.

This unlikely deal happened in part because of bold efforts by the Castle Rock Economic Development Council, whose approach was very different from the one used by the state as a whole when it comes to television and film.

For years, Colorado has missed out on major film productions because the incentives available to lure studios have been tiny compared to places such as Georgia and New Mexico — and when this fund was slashed from $3 million to $750,000 in 2017, Colorado Film Commissioner Donald Zuckerman admitted to us that "we won't be able to compete."

In contrast, Castle Rock EDC offered Dorsey Pictures, an affiliate of Red Arrow Studios, between $2,000 and $3,000 for every job relocated to the community — a substantial amount, certainly, but one that council vice president of marketing and operations Karah Reygers is confident will pay off sooner rather than later.

"We're so excited that they chose Castle Rock to locate and expand," Reygers says. "We feel very fortunate to have them and look forward to them plugging into our community as they grow."

Outside Dorsey Pictures' new Castle Rock offices.
Courtesy of Dorsey Pictures
For Chris Dorsey, who runs Dorsey Pictures with his wife, Amy, the move isn't a long one. They previously had a satellite office in Littleton, and they live close to Castle Rock. Still, he maintains via email that while their home's proximity to the community "didn't hurt," it "wasn't the biggest motivating factor."

More important to Dorsey is that "Castle Rock is a booming business center with high-speed communications connections. It's a beautiful Colorado community with easy access to Denver and the international connections available via Denver International Airport. When recruiting from the coasts, potential staff get one look at this community, its quality of life, restaurants, brew houses, unmatched outdoor recreation, great school systems and world-class shopping, and their reactions are predictable."

Staffing up is a necessity for Dorsey Pictures given an ambitious production slate that goes well beyond Dog's Most Wanted, which debuts at 7 p.m. on Wednesday, September 4, on WGN; the series will include some of the last footage showcasing Beth Chapman, Duane's wife, who died in June and was memorialized at a July service in Aurora that emphasized the couple's own Colorado roots.

Other Dorsey Pictures productions include Building Alaska, Maine Cabin Masters and Building Off the Grid, all for the DIY Network; Accident, Suicide or Murder, an Oxygen TV offering; and Wings 3D, the outfit's first IMAX film, expected to be released in 2021 with narration by actor Michael Keaton. In all, Dorsey Pictures has more than twenty series or specials in production, and its network partners have included HGTV, Travel, the History Channel, National Geographic, NBC Sports and ESPN.

The Dorseys' activities certainly intrigued the Castle Rock EDC. "We were first introduced to them probably eight to ten months ago, as they were determining what their next steps would be," Reygers says. "We let them know that we would love to have them join the business climate here in town and that our office could be of assistance."

Specifically, she goes on, the council "has an eco-devo policy that allows us to fund and assist a targeted industry, which Dorsey Pictures fits into because it's high-tech and high-growth. It's a job-creation incentive that we negotiate in partnership with the Town of Castle Rock." Inside the Castle Rock office.
Courtesy of Dorsey Pictures
The $2,000 to $3,000 fees per employee vary by salary, with the incentive trending higher if the individual's salary is above the average for Douglas County — and there's a $500 bump if he or she actually settles within Castle Rock's city limits. Moreover, Reygers emphasizes that "the funds are generated through a commercial-use tax on development and commercial space. So it's not like we're tapping into any kind of general fund. It's a way for commercial development in Castle Rock to encourage more commercial development."

For Dorsey, the extra money made the decision to pick Castle Rock easier. But he points out that "as we continue to grow the business, we want to be located in a place that allows us to easily recruit from the TV centers in New York and Los Angeles. Castle Rock simply offers a very different way of life. Having lived in L.A. when we started the business, we knew we wanted to raise a family in an environment other than a large metropolitan area — and many other TV producers we've recruited have shared that sentiment. We think Castle Rock is the perfect environment to foster and nurture a creative business and blend a quality way of life that simply isn't available in most cities."

That doesn't mean every Dorsey Pictures offering will be made here. Dorsey reveals that a thus-far-unannounced series "will shoot primarily in Colorado, and we're pitching other concepts that are Colorado-based." But he also has to keep an eye on the bottom line.

"The incentive business is highly competitive, with many states offering aggressive packages," he acknowledges. "These incentives have become a driver for casting and development," and as a result, "we spend more time looking for talent and concepts in states where there are strong incentives, for obvious reasons."

He adds: "Of course, we love to shoot in Colorado, and the incentives certainly help."
KEEP WESTWORD FREE... Since we started Westword, it has been defined as the free, independent voice of Denver, and we'd like to keep it that way. With local media under siege, it's more important than ever for us to rally support behind funding our local journalism. You can help by participating in our "I Support" program, allowing us to keep offering readers access to our incisive coverage of local news, food and culture with no paywalls.
Make a one-time donation today for as little as $1.