More Than Half of Survey Respondents Say They've Flown With Marijuana in U.S.

Thinkstock file photo
As our Ask a Stoner columnist noted this week, flying with marijuana is still not okay despite a TSA glitch that briefly suggested otherwise. But a new survey suggests that it's happening a lot anyway. The report from MissTravel.com, which calls itself "the world's first travel dating website," shows that more than half the respondents have taken cannabis with them on a domestic flight. But that number tumbles for people traveling internationally.

Flying with marijuana has long been a hot topic among Westword readers. But the subject flared up nationally earlier this month, when the Marijuana Majority's Tom Angell, a frequent interviewee in this space, tweeted the following: "Trump TSA marks marijuana as less restrictive on planes than alcohol over 140 proof, bottled water, corkscrews & recreational oxygen."

The basis for Angell's tweets was an item on the TSA's website that indicated a change in policy toward traveling with medical marijuana. Here's a screen capture of the message. 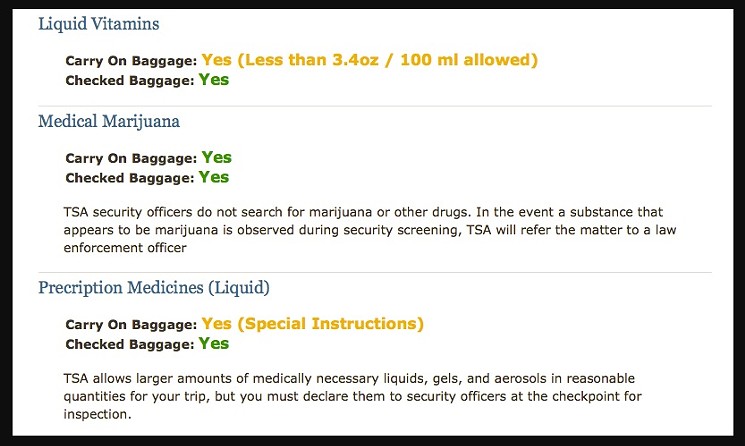 Courtesy of MissTravel.com
Shortly after Angell's tweets caused a stir, the Transportation Security Administration responded with a Twitter message of its own, revealing that the information had been shared in error. "We're sorry for any confusion," the TSA tweeted. "A mistake was made in the database of our new 'What can I bring?' tool."

So what are the rules related to flying with marijuana? Here's how former Westword marijuana critic William Breathes described the situation in a 2015 post:


Transportation Security Administration officials have said they wouldn’t be able to stop passengers from boarding a flight with cannabis — but that’s mostly because they can’t. TSA reps have told Westword repeatedly in the past that they aren’t scouring bags for weed. They’re much more concerned with nail clippers and liquids over the three-ounce limit. If they do find your stash and want to do something about it, they’ll hand you over to local cops, as the TSA isn’t actually a law enforcement agency. Because local police enforce local laws and being a medical patient with pot is legal locally, it sort of means that patients in medical states can board planes with pot...if you ignore the fact that you’re boarding a federally controlled space and that federal law says pot possession is illegal.

In other words, people can still run afoul of federal authorities by flying with marijuana — even patients traveling by air to and from states where medical cannabis is legal. But the results of the aforementioned MissTravel.com survey indicate that more and more folks feel doing so represents a relatively low risk in America. But foreign countries, many of which have far more punitive policies in regard to marijuana, are another story.

Here are the questions asked in the survey, followed by the results, based on more than 5,000 responses.


Have you ever flown with marijuana within the U.S.?

Have you ever traveled with marijuana overseas?

To get more information about the survey, we reached out to MissTravel.com spokesperson Hannah Dela Cruz for the following Q&A, conducted via e-mail. 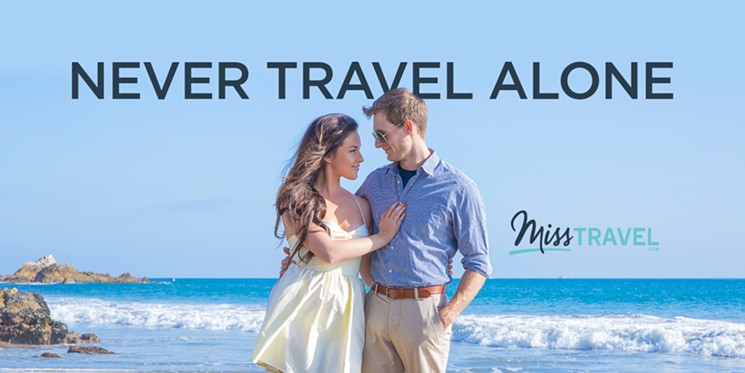 MissTravel Facebook page
Westword: How was the survey conducted?

Hannah Dela Cruz: The survey was conducted on MissTravel.com through a pop-up questionnaire that appeared after members logged in. The two-question survey was multiple choice and was distributed to members living within the United States, male and female, between the ages of 18 and 55. The survey is anonymous, and no identifying data can be tied to the respondents. Data was collected from March 1, 2016, to March 31, 2017.

How many members does MissTravel have living in the United States?

MissTravel has 262,161 members in the United States.

You had more than 5,000 people participate in the survey. Is that a large number for the surveys you conduct among members?

Did it surprise you that so many of your members responded to this question?

It was quite surprising, given the topic of the survey. However, because of the changing attitudes towards marijuana across the country, it’s easy to see why people are starting to be more open about this lifestyle.

Based on previous surveys, do many if not most MissTravel members use marijuana?

This is the first time we’ve surveyed members of MissTravel on this topic. Members disclose their smoking and drinking habits on their dating profile. However, we do not directly ask them about marijuana use, so I can’t tell from data if most of them use the substance.

Does marijuana use differ widely depending upon the ages of MissTravel members? If so, what age groups among your members use marijuana most frequently?

A large portion of members are between the ages of 18 to 35, so many of the respondents to the question fell within this age group, and the data was skewed in that direction.

There's a big difference between the number of people who say they took marijuana with them on domestic flights as opposed to international flights. Do most members appear to believe that if they get caught with cannabis in the United States, it won't be a big deal, but it could be disastrous if it happened in many overseas locations?

Results of the survey seem to confirm this. According to the TSA website, their agents do not search travelers for marijuana or other drugs, almost half of U.S. states have decriminalized marijuana, and being caught in possession within these states is treated like a minor traffic violation. However, navigating international drug laws are a little bit more complicated. I’m sure the threat of landing in a foreign jail or being detained at customs and ruining their vacation is a huge deterrent for many weed lovers.

Did you get an indication from the survey that many of your members see bringing marijuana with them on a flight as routine and safe?

Only a slight majority said they’ve flown with marijuana in the past domestically, and even less said they’ve traveled with marijuana overseas, so I think people are still cautious when traveling with weed. They may think it’s safe within the States, but it seems a large majority would not dare transport it to other countries.

Would you guess that the number of people taking marijuana with them on domestic flights will go up in the coming years?

It wouldn’t surprise me if more people travel with marijuana in the coming years. I think the relaxed attitude of the TSA coupled with more states decriminalizing or legalizing the substance will contribute to this. However, conflicting federal and state laws may still deter many people.