Justin Bannan's booking photo and a shot from his stint with the Denver Broncos. Boulder Police Department/Christian Petersen via Getty Images
The Denver Broncos' thrashing at the hands of the Kansas City Chiefs on Thursday Night Football isn't the only embarrassment for the team this week. Adding to the shame was the arrest of forty-year-old former Bronco and ex-CU Buff Justin Bannan on suspicion of attempted first-degree murder and more in relation to a bizarre shooting in Boulder, after which he insisted that he was being chased by members of the Russian mafia.

At first blush, this claim is amusing. But the laughs dissipate in the face of another Bannan revelation: He's suffering from a brain condition of the sort that has turned life tragic for far too many former professional football players.

Bannan, a defensive tackle, was a standout for the University of Colorado from 1998 to 2001, and his potential inspired the Buffalo Bills to draft him in the fifth round of the 2002 NFL draft. He spent four seasons with the Bills before moving to the Baltimore Ravens in 2006, the Broncos in 2010, the St. Louis Rams in 2011, and back to the Broncos again in 2012 before heading to the Detroit Lions, where he ended his career in 2013.

After hanging up his cleats, Bannan stayed connected with the local sports scene via assorted media appearances. He turned up on the now-defunct Denver Post program hosted by Woody Paige and Les Shapiro, visited Buffs practice and showed off his wine cellar in the following video.


But the PR turned nasty at around 2:24 p.m. on October 16, when members of the Boulder Police Department responded to Black Lab Sports, 3550 Frontier Avenue, on a report of a shooting.

Upon their arrival, officers discovered a woman with what was described as a non-life-threatening wound to her arm. She was transported to a local hospital for treatment.

Bannan, meanwhile, was arrested at the scene. Even though the BPD noted that investigators "believe the shooting was random" in a news release, pointing out that "the suspect and victim worked in the same building and were distantly acquainted," Bannan is being held on suspicion of several extremely serious offenses: attempted first-degree murder, first-degree assault (extreme indifference), first-degree assault (intent to cause serious bodily injury) and first-degree burglary.

According to Bannan's arrest affidavit, the victim identified Bannan as her assailant, and cops quickly tracked him down on the west side of the aforementioned building. He had two guns in his backpack, as well as a $20 bill that tested positive for cocaine residue. 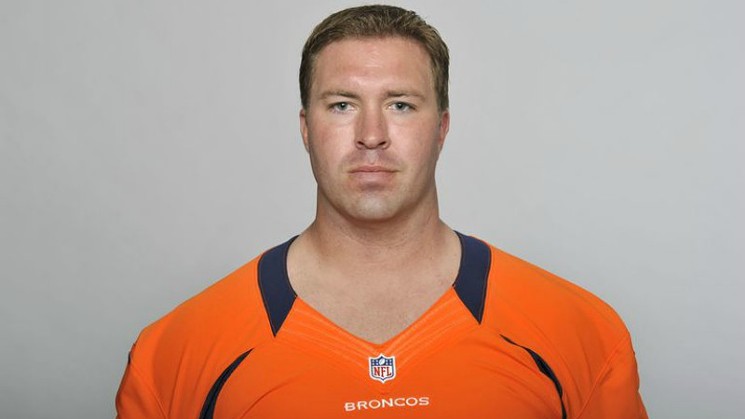 One of Justin Bannan's Denver Broncos team portraits.
denverbroncos.com
En route to the police station, Bannan reportedly told officers that he suffers from hydrocephalus, defined by the Alzheimer's Association as "a brain disorder in which excess cerebrospinal fluid (CSF) accumulates in the brain's ventricles, causing thinking and reasoning problems, difficulty walking, and loss of bladder control."

Many former football players have been diagnosed with brain maladies, most prominently Chronic Traumatic Encephalopathy, better known as CTE, that are associated with concussions and repeated blows to the head.

Onetime CU Buffs haven't been excluded from the lengthening roster of CTE victims. Recall that Heisman Trophy winner Rahsaan Salaam committed suicide in a Boulder park circa 2016. His brain wasn't tested for CTE after his death, but his family believes that damage to this organ by the disease contributed to his fatal act. When his Heisman was auctioned off last year, a portion of the proceeds went to CTE research.

The affidavit quotes Bannan as saying he'd been hiding in a "dark room" when the woman saw him. After firing the shot, he allegedly told her, "I'm sorry, the Russian mafia is after me."

Anyone with additional information about the incident is encouraged to contact Detective Sarah Cantu at 303-441-4328 or Northern Colorado Crime Stoppers at 1-800-222-TIPS (8477).
KEEP WESTWORD FREE... Since we started Westword, it has been defined as the free, independent voice of Denver, and we'd like to keep it that way. With local media under siege, it's more important than ever for us to rally support behind funding our local journalism. You can help by participating in our "I Support" program, allowing us to keep offering readers access to our incisive coverage of local news, food and culture with no paywalls.
Make a one-time donation today for as little as $1.