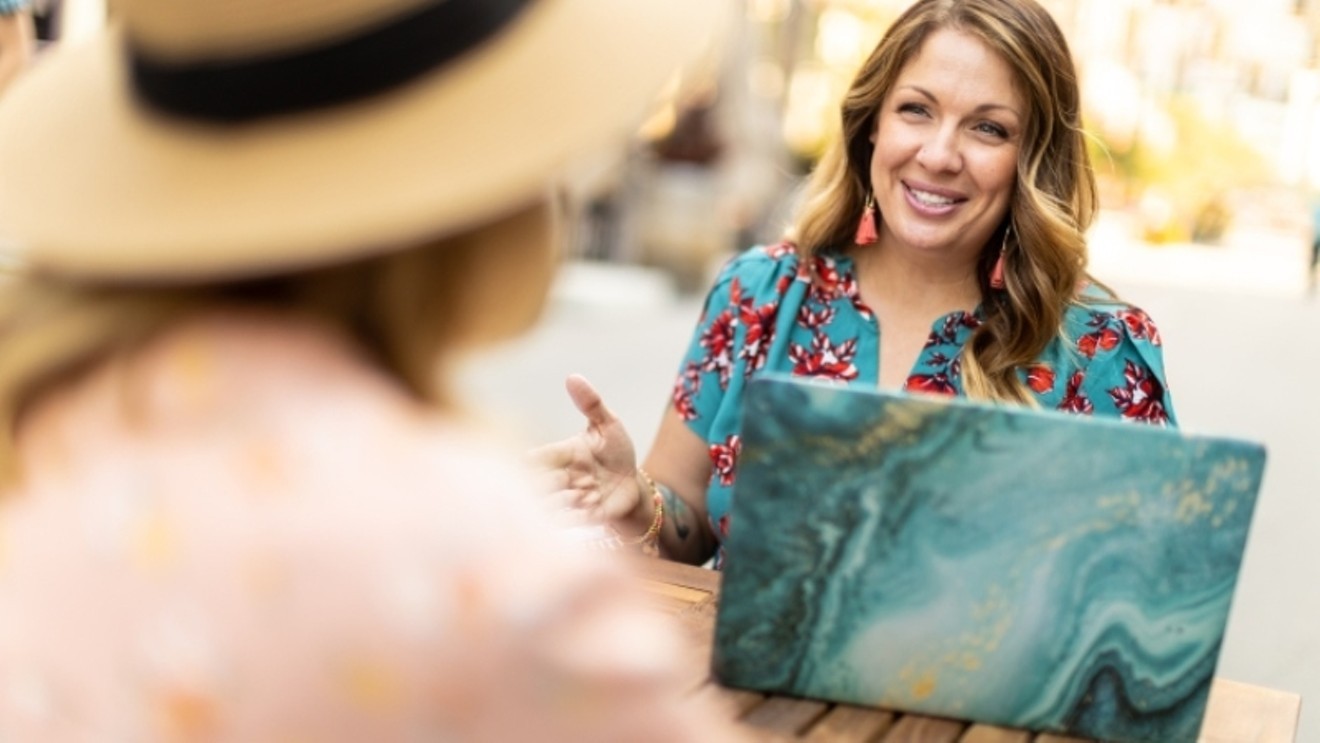 Working on Smith's behalf is the Alliance Defending Freedom, the same conservative law firm that backed Jack Phillips, owner of Lakewood's Masterpiece Cakeshop, in a case stemming from his refusal to bake a wedding cake for a gay couple, Charlie Craig and David Mullins, also because of his faith. The U.S. Supreme Court ruled in Phillips's favor in 2018, albeit on fairly narrow grounds.

Since then, however, the court has become decidedly more conservative with the addition of Brett Kavanaugh and Amy Coney Barrett, both selections of former president Donald Trump; Ketanji Brown Jackson's subsequent appointment by President Joe Biden didn't shift the balance of power because she replaced the retiring Stephen Breyer, who typically voted with the court's now-reduced liberal wing. As a result, a judgment in Smith's favor could expand the Masterpiece Cakeshop opinion in ways that alarm Garrett Royer, deputy director of One Colorado, which describes itself as "the state's leading advocacy organization dedicated to advancing equality for lesbian, gay, bisexual, transgender, and queer (LGBTQ) Coloradans."

After the court agreed to take on the case in February, Royer issued a statement that reads: "A decision by the Supreme Court allowing discrimination would have implications for our country that reach far beyond LGBTQ people. It could threaten our longstanding anti-discrimination protections. Coloradans have shown time and again that our state is open to all, and these efforts do not represent our values."

In a June 2018 interview with Westword after the Supreme Court announced its Masterpiece Cakeshop decision, attorney Paula Griesen, who represented Craig and Mullins in concert with the ACLU of Colorado, acknowledged that the outcome was "certainly disappointing from the perspective that Charlie and David did not prevail. But it's a narrow, limited opinion just on the facts of the case. It was largely based on statements made by some members of the Colorado Civil Rights Commission" — which threw its support behind Craig and Mullins in 2014 — "and not on any inappropriate conduct by Charlie and David."

The 303 Creative complaint, filed on September 20, 2016, has a broader scope. The ADF characterizes it as a "pre-enforcement challenge" against the Colorado Anti-Discrimination Act (CADA), which "prohibits creative professionals from expressing any views about marriage that could indicate someone is 'unwelcome, objectionable, unacceptable, or undesirable' because of their sexual orientation or that suggests that the designer won’t create particular expressive works because of those beliefs." The ADF claims that CADA prevents Smith from explaining online that she won't "create websites and graphics celebrating same-sex weddings" because they "violate her conscience. Lorie's faith teaches her that marriage is between one man and one woman."

Some of the key points in the ADF's arguments: "Lorie works with all people. ... She just doesn’t promote all messages"; "Free speech is for everyone, not just those who agree with the government"; "Creative professionals should be free to create art consistent with their convictions without the threat of government punishment"; "Even though the Supreme Court condemned Colorado for acting with 'clear and impermissible hostility' in Jack Phillips’ case, the state continues to target Lorie because it disagrees with her religious beliefs"; "Website designers and internet companies speak freely all the time — Lorie should have the same freedom"; and "Americans have the right to challenge unjust laws. They don’t have to wait to be punished before seeking justice."

That's not the way the U.S. District Court saw it, however. The defendants in the case, including Colorado Civil Rights Commission head Aubrey Elenis and its other members, as well as Colorado Attorney General Phil Weiser, were granted summary judgment in September 2019, largely because the case was hypothetical: Smith filed suit before posting any statement, and no state body had punished her. The unstated subtext: The ADF wanted to pick a fight, and the court wasn't interested in participating.

The 10th Circuit Court of Appeals had other reasons for finding against Smith on July 26, 2021, by a 2-1 vote, with senior judges Mary Beck Briscoe and Michael R. Murphy forming the majority and Chief Judge Timothy M. Tymkovich, who heard a 2018 ethics-complaint case against Kavanaugh, offering a dissent.

The conclusion of Briscoe and Murphy reads: "We agree with the Dissent that 'the protection of minority viewpoints is not only essential to protecting speech and self-governance but also a good in and of itself.' Yet, we must also consider the grave harms caused when public accommodations discriminate on the basis of race, religion, sex, or sexual orientation. Combating such discrimination is, like individual autonomy, 'essential' to our democratic ideals. And we agree with the Dissent that a diversity of faiths and religious exercise, including Appellants’, “enriches” our society. Yet, a faith that enriches society in one way might also damage society in others, particularly when that faith would exclude others from unique goods or services. In short, Appellants’ Free Speech and Free Exercise rights are, of course, compelling. But so too is Colorado’s interest in protecting its citizens from the harms of discrimination. And Colorado cannot defend that interest while also excepting Appellants from CADA. For these reasons, we affirm the district court’s grant of summary judgment in favor of Colorado."

Tymkovich felt differently — so much so that ADF highlights several of his comments on its web page about the case. He called the majority's opinion "staggering" and "unprecedented" because "the Constitution protects Ms. Smith from the government telling her what to say."

Smith and Alliance Defending Freedom general counsel Kristen Waggoner responded to the Supreme Court's acceptance of the case by way of a virtual media event staged on February 22.

"I am immensely grateful that the U.S. Supreme Court will hear my case," Smith said at the time, "and I am hopeful that they will rule in favor of free speech for all artists and, ultimately, for everyone. ... Artists don’t surrender their freedom of speech when they choose to make a living by creating custom expression. Those who create speech for a living are entitled to the full protection of the Constitution. Just because we communicate one viewpoint doesn’t mean we should be forced to promote an opposing viewpoint."

For her part, Waggoner argued that "the government shouldn’t weaponize the law to force a web designer to speak messages that violate her beliefs. This case is about the freedom of all artists and all Americans. This freedom transcends particular views and is foundational to a free society."

She added: "Like countless other artists, Lorie Smith serves all people. The 10th Circuit agreed. Lorie’s website designs are also speech protected under the First Amendment. The 10th Circuit agreed with that, too. And Lorie chooses whether to create websites based on their content, not the people asking for those websites. The 10th Circuit agreed here as well. But despite all that, the majority determined that Colorado’s law trumps artists’ First Amendment rights: that they can actually be compelled to create art that communicates ideas contrary to their convictions and then be compelled to publish those ideas on the web for all to see. Colorado says Lorie can be made to do all these things while being forced to put her company’s name — and its seal of approval — on speech that promotes ideas that violate her conscience."

Here's the video of that press conference:

A decision in the case is expected to be announced next year. After today's oral arguments, Smith and the Alliance plan another media event outside the Supreme Court. Click here to watch the livestream, as well as to read 303 Creative LLC and Lorie Smith v. Aubrey Elenis, et al. and the 2021 opinions and dissent by the 10th Circuit Court of Appeals.
KEEP WESTWORD FREE... Since we started Westword, it has been defined as the free, independent voice of Denver, and we'd like to keep it that way. With local media under siege, it's more important than ever for us to rally support behind funding our local journalism. You can help by participating in our "I Support" program, allowing us to keep offering readers access to our incisive coverage of local news, food and culture with no paywalls.
Make a one-time donation today for as little as $1.