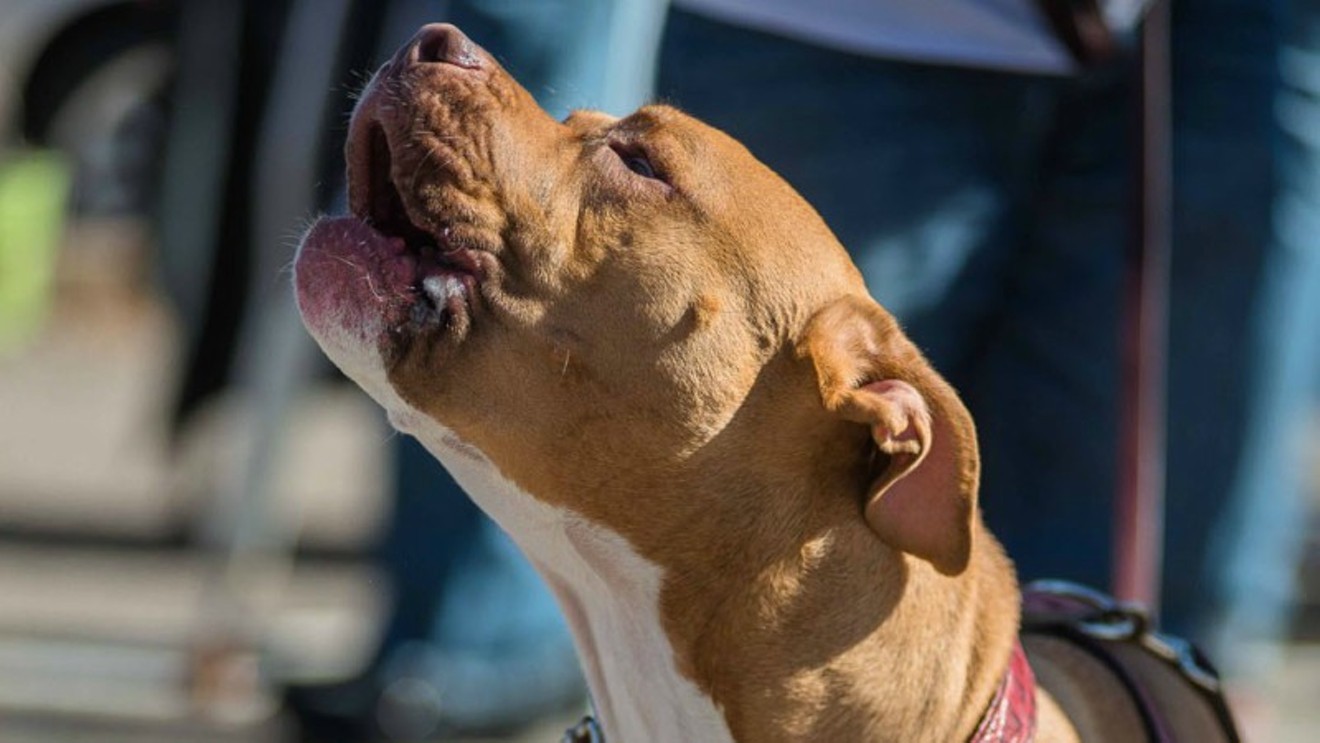 A photo from the Westword slide-show "Parade of Pit Bulls 2013." Photo by Darian Simon
Update, September 19: At 10:10 p.m. on September 18, the Golden Police Department issued a news alert: "We can confirm that the 89-year-old female victim of last week’s animal attack in Golden succumbed to the injuries sustained during the attack and passed away this morning." The victim's name has not been released, and the case remains under investigation.

According to an update on the afternoon of September 19, the twelve-year-old boy also injured in the incident has been released from the hospital and is recovering. The second dog at the center of the story "was euthanized at the Foothills Animal Shelter after the dog’s owners surrendered ownership to the shelter." Another dog had already been euthanized because of injuries it had sustained in the incident.

"The City of Golden does not have dog breed ban laws," an earlier release had noted. "Golden residents are required to have their dogs licensed and vaccinated to maintain compliance. This information is being verified regarding the two involved animals."

Continue for our earlier coverage:

Original post: Pit bulls have long been a favorite subject for local TV news stations, which many fans of the breed believe have regularly mischaracterized the dogs to boost ratings. But after both Denver and Aurora lifted community bans against pits in recent years, horror stories warning about the alleged risks presented by the animals have been comparatively rare.

Today marks a change. The home pages of 9News, Denver 7, CBS4 Denver and Fox31 all prominently feature accounts of a September 14 attack in Golden that seriously injured an elderly woman. And while the coverage hasn't sunk to the sensationalism of the past (9News's piece uses the word "dogs" in its headline rather than "pit bulls"), the way stories have taken off on Twitter, where they're being retweeted at a dizzying pace, suggest that more demonization could be on the way.

According to a Golden Police Department bulletin, officers were dispatched to a residence on the 15700 block of West 1st Avenue after a report about an animal bite around 3:35 p.m. on September 14; the call came from a neighbor, where a wounded twelve-year-old boy had run for help. Upon their arrival, law enforcement officers found blood leading to the home, and they discovered a pair of "pit bull dogs attacking an older female" in the back yard. They responded by placing themselves between the woman and the dogs, which they attempted to subdue by way of "tasers and less-lethal shotguns," but the tactics were "not effective."

Additional officers sent to the scene had more success at holding off the dogs, allowing paramedics to reach the woman, who was raced to St. Anthony's Hospital with injuries described as critical. The boy suffered serious wounds, too; he was subsequently airlifted to Children's Hospital for treatment. The dogs, meanwhile, are said to be "contained and are not a threat to the public," and described as being "known to the two victims of the attack."

The City of Golden's animal code doesn't mention specific types of dogs, treating all breeds equally. (At present, the only metro-area community with an active pit-bull ban is Louisville.) One section of Golden's code specifies: "Any animal which has caused injury to any person or animal or which has unprovokedly attached any person may be seized and impounded at the owner's expense by any code enforcement or police officer without notice to the owner." After a hearing, animals can be "humanely euthanized" if they're determined to present an ongoing danger to the public.

In contrast, Denver treated pit bulls as inherently violent for decades, enacting a ban against three specific breeds in 1989. An organization called Replace Denver BSL challenged these assumptions in 2020, assembling a briefing book for members of Denver City Council entitled "The Case Against Breed-Specific Legislation" that pulled together research and studies that found such prohibitions didn't make communities safer. The information in the document helped convince council to create a provisional license for pit bulls in the city. After the ordinance was vetoed by Mayor Michael Hancock, it was sent to the ballot, and Denver voters repealed the ban in November 2020.

On July 31, a 9News piece looked into how the repeal is working, sharing city data that connected a quarter of all dog bites in Denver last year to pit bulls; such reports numbered 38 in 2019, 65 in 2020 and 116 in 2021. But the station also acknowledged that the statistics are based on victims self-identifying dogs as pit bulls even though they're sometimes mistaken.

Will Denver viewers see more reports treating pit bulls like ticking time bombs in the coming days? Odds are good, particularly after yesterday's incident in Golden.
KEEP WESTWORD FREE... Since we started Westword, it has been defined as the free, independent voice of Denver, and we'd like to keep it that way. With local media under siege, it's more important than ever for us to rally support behind funding our local journalism. You can help by participating in our "I Support" program, allowing us to keep offering readers access to our incisive coverage of local news, food and culture with no paywalls.
Make a one-time donation today for as little as $1.