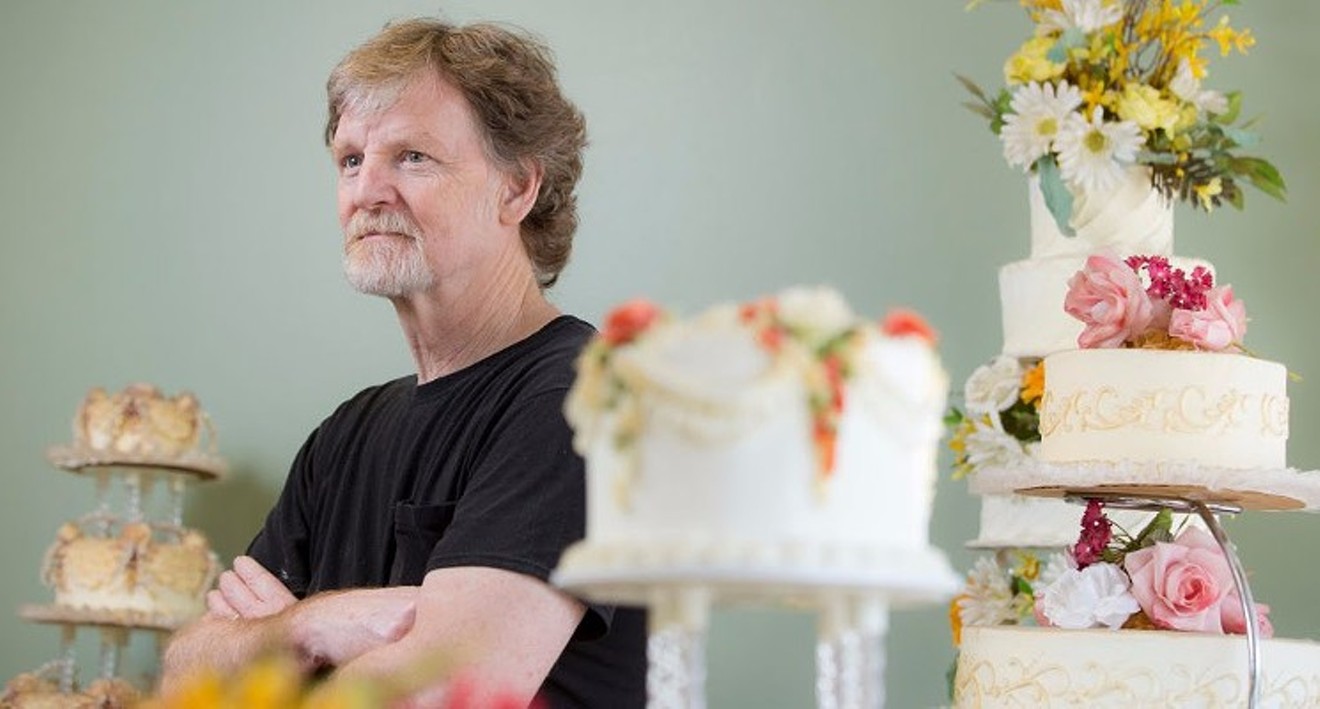 Jack Phillips, owner of Masterpiece Cakeshop. Courtesy of Colorado Christian University
The Colorado Civil Rights Division and its commission have endured several twists and turns this legislative session as Republicans have mounted a fierce restructuring campaign.

Republicans on the Joint Budget Committee tried to de-fund the CCRD. Then House Republicans tried to significantly restructure its commission. While both efforts were thwarted and the CCRD will be fully funded for the next fiscal year, the campaign to change the state agency charged with enforcing anti-discrimination laws in employment has not ended.

Republican Senator Bob Gardner passed four amendments to HB 1256, a sunset bill that would reauthorize the civil rights agency's existence for the next six years, through a Senate committee; the amendments would have, among other changes, required quarterly reports summarizing every case that came through the agency and would have allowed the accused to bypass the CCRD's decision-making process and go straight to the courts. But Gardner pulled them off the bill when it landed on the Senate floor and issued two new amendments that were far more palatable for Democrats. That version of the bill passed unanimously on April 30, even garnering support from that chamber's sixteen Democrats.

But the Democratically controlled House was not thrilled with the amendments and rejected the bill early Thursday morning, creating a conflict between the House and Senate versions of the legislation that both chambers will have to work out in a committee before the session ends May 9.

"A conference committee would allow us to meet with the Senate to negotiate the two difference between the bills," says Representative Leslie Herod, a Denver Democrat and primary sponsor of HB 1256, adding, "I think we have come a long way in this journey. We initially started with Republicans blocking funding for the Civil Rights Division. We are now in a place where the funding is secure; we just have to work out these nuances in the commission."

The campaign to restructure the Civil Rights Division and its commission comes on the heels of the Masterpiece Cakeshop case that is pending in the U.S. Supreme Court. In 2012, a Lakewood baker refused to make a custom wedding cake for a same-sex couple on the basis of his religious beliefs. The couple filed a discrimination complaint with the civil rights agency, which sided with the couple and forced Masterpiece Cakeshop to either make custom wedding cakes for everyone or stop baking them altogether. Naturally, litigation has drawn the issue out for years. Conservatives are furious at the civil rights agency's involvement and decision to force the baker to choose between his business and religious beliefs, so they've been waiting for the right moment to upend the commission.

The Senate amendments would also require the commission to include representatives of labor unions, the business sector and government. Members must also represent different political parties and parts of the state.

"I worry that we are going to be overly politicizing and radicalizing the commission in a way that's not effective for Coloradans," Herod says. "What I'm going to be doing [in conference committee] is looking to ensure that whatever we create for the commission, whatever makeup we create, will ensure those commissioners will work for the people of Colorado, not for the special interests of the people in the Capitol building."

Organizations like Colorado Good Business, One Colorado, Interfaith Alliance of Colorado and the Colorado Working Families Party have all come out against the Senate amendments, calling for a clean reauthorization of the civil rights agency without any restructuring.

“We are pleased that the Senate came together in good faith to work to pass a reauthorization of the Colorado Civil Rights Division. However, additions brought forth [last week] make building an effective commission more complicated and politicized. That is why we will continue to push for a clean reauthorization of the CCRD," said Amanda Henderson, executive director of the Interfaith Alliance of Colorado, in a statement.

Herod says that if both chambers can't hash out their differences before May 9, she's willing to punt the issue to the next session.