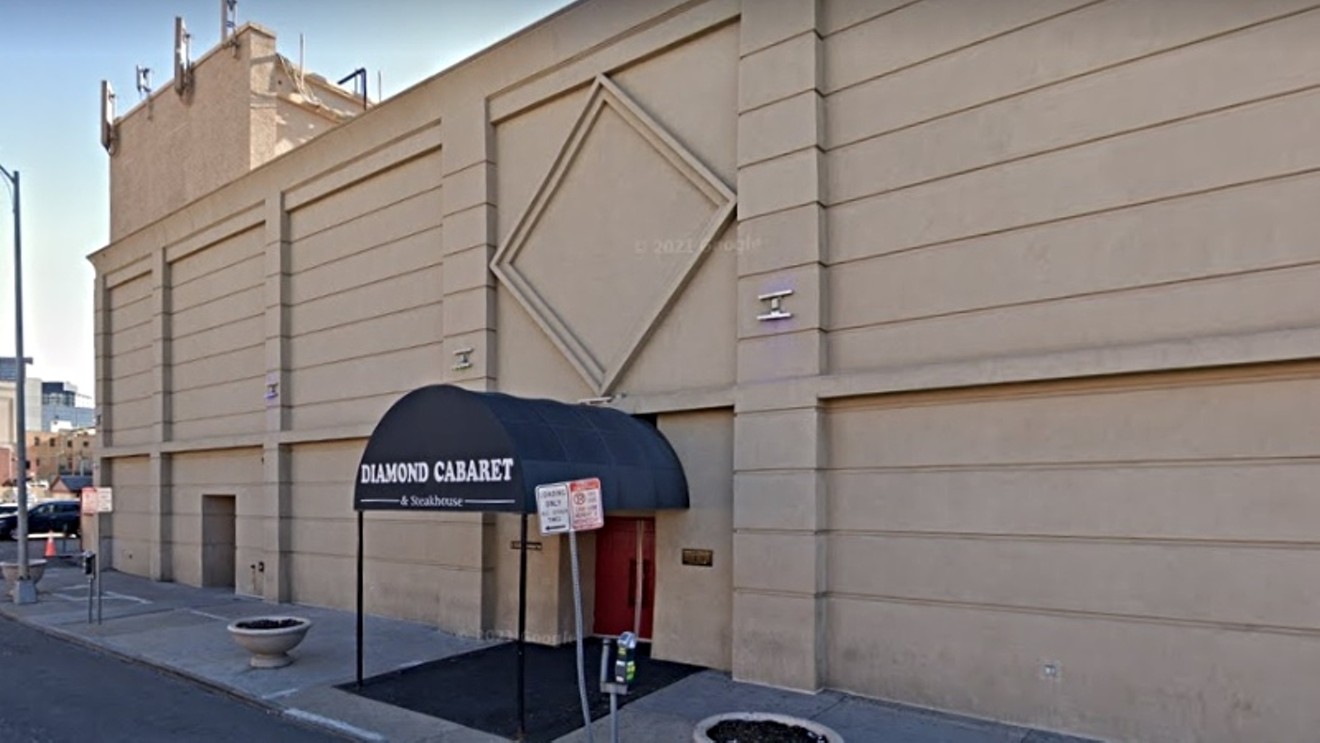 The Diamond Cabaret, at 1222 Glenarm Place, is one of five adult nightclubs in Denver owned by RCI Hospitality Holdings. Google Maps
The Denver Police Department has not yet announced any arrests in connection with a May 1 double shooting outside PT's Showclub, a strip joint at 1601 West Evans Avenue that's been the setting for numerous violent episodes. Of the sixteen killings or attacks at Colorado strip clubs since 2011, four took place at the venue.

Westword reached out to RCI to ask about this latest incident and any changes in policy. RCI spokesperson Gary Fishman responded with this statement: "We don’t have any comment on your inquiry."

RCI has many other establishments in its portfolio — more than forty, including clubs in New York City, Chicago, Dallas/Fort Worth, Houston, Miami, Minneapolis, St. Louis, Charlotte and Pittsburgh in addition to Denver. The businesses operate under brand names such as Rick's Cabaret, XTC, Club Onyx, Vivid Cabaret, Jaguars Club, Tootsie's Cabaret, Scarlett's Cabaret and, for its sports bar/restaurant chain, Bombshells Restaurant & Bar.

The Denver properties were among eleven adult nightclubs purchased for $88 million by the company in six states (Missouri, Kentucky, Indiana, North Carolina, Maine and Colorado), along with six related real estate parcels and associated intellectual property. Nine of the local clubs had been controlled by Lakewood-based entrepreneur Troy Lowrie, an outsized personality known for speaking his mind: Back in 2011, he railed against the Denver Police for a prostitution bust that was later dropped.

Lowrie offered this quote at the time of the deal: "These clubs have been my father's and my life's work. We're pleased to have realized their value. Their future will now be in the best hands in the industry. We look forward to being significant RCI shareholders and participating in the company's long-term growth."

Added Eric Langan, RCI's president and CEO: "This is exactly the type of sizable transaction for which we have been searching. All the clubs are well-established and proven cash generators. Troy and his team should be recognized for their accomplishments. We believe the quality of the clubs' licenses and locations enhance the value of the collective acquisition to us."

The purchases were RCI's biggest deal since it was founded in 1995, as well as "one of the largest in the history of the gentlemen's club industry," the firm maintained — and it expected them to make a sizable contribution to its bottom line. For the six-month period ending March 31, 2021, RCI reported revenues of $82.5 million, while the eleven clubs generated $40 million in revenue for the 2019 fiscal year.

The COVID-19 pandemic has presented significant challenges; both PT's Showclub and PT's Showclub Centerfold were cited by the City of Denver for virus-related safety violations when they were still in Lowrie's portfolio. But RCI's latest earnings report, released on May 9, shows business picking up substantially.

This graphic details sizable earnings jumps for the first three months of 2022 as compared to the same period a year earlier: 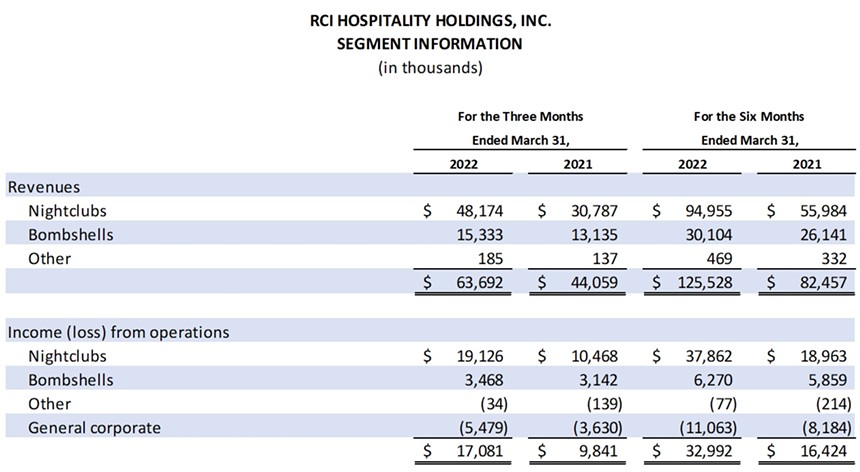 rcihospitality.com
Nightclubs have been a big part of RCI's success, as outlined in this breakdown of the sector: "Revenues of $48.2 million increased by 56.5 percent compared to the prior-year quarter, when COVID-19 related government restrictions were just starting to ease; newly acquired clubs contributed 50 percent of the $17.4 million increase in segment revenues; same-store sales growth contributed 20 percent, and eight northern clubs...contributed 30 percent; operating margin expanded primarily due to an 88 percent year-over-year increase in high-margin service revenues."

Meanwhile, RCI has been expanding its operations on multiple fronts, acquiring a new club in south Florida, contracting to buy another venue in Fort Worth, opening a steakhouse in Miami, planning a reformatted club opening in San Antonio, launching the beta version of a social media fan site dubbed AdmireMe.com, and preparing to mint a non-fungible token dubbed Tip-N-Strip next month.

Langan's assessment of these achievements: “We had an outstanding quarter across the board. We ended the quarter with $38.1 million in cash, and favorable trends are continuing, with total revenues in April exceeding March."

That's a lot of money at stake. And double shootings are bad for business.
KEEP WESTWORD FREE... Since we started Westword, it has been defined as the free, independent voice of Denver, and we'd like to keep it that way. With local media under siege, it's more important than ever for us to rally support behind funding our local journalism. You can help by participating in our "I Support" program, allowing us to keep offering readers access to our incisive coverage of local news, food and culture with no paywalls.
Make a one-time donation today for as little as $1.