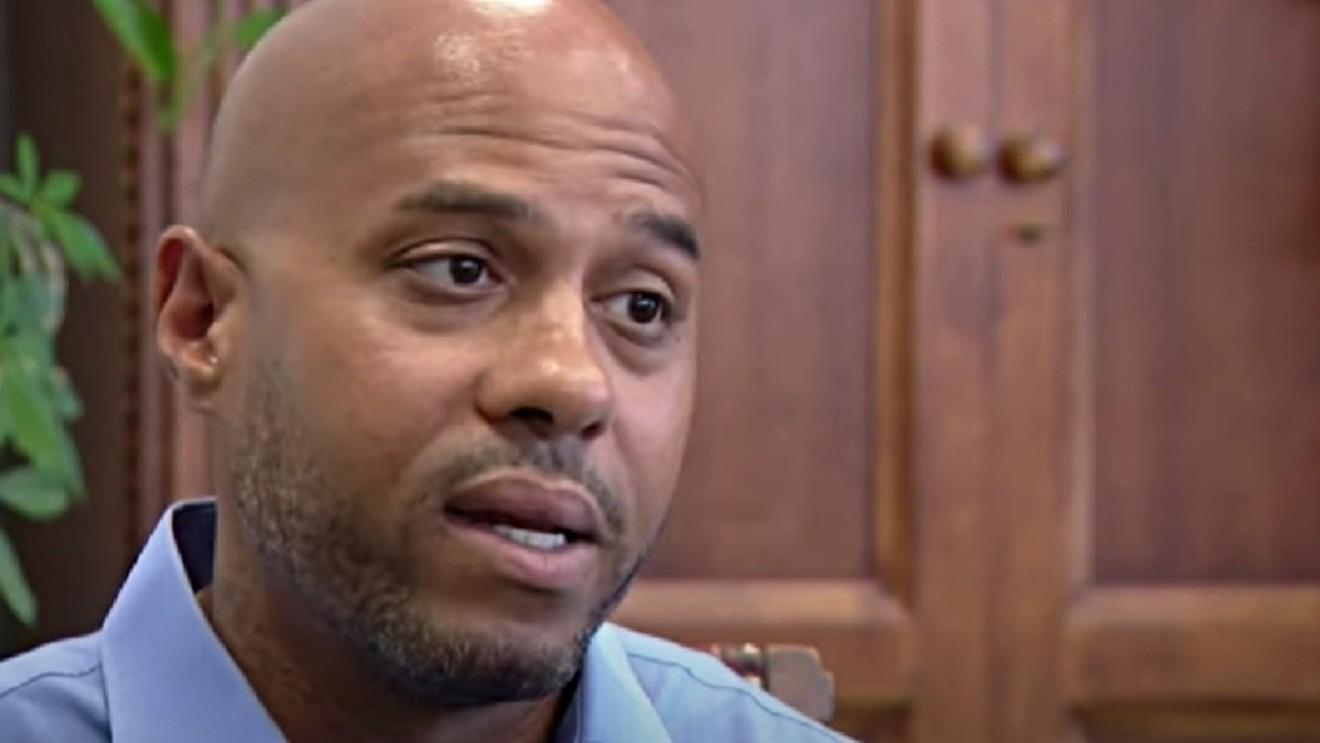 Roberts, a longtime anti-gang activist and civil-rights advocate, is the subject of The Holly, which turned out to be the biggest attraction at the just-concluded 45th annual Denver Film Festival. The documentary by journalist/filmmaker Julian Rubinstein focuses on Roberts's prosecution for shooting a gang member at a peace rally in 2013 — an act for which he was found not guilty two years later. More than 1,300 people attended a November 10 screening at the Ellie Caulkins Opera House, and during a Q&A session afterward, Rubinstein talked about inviting numerous public officials to attend, including Mayor Michael Hancock, whom he feigned looking for in the crowd.

At that point, an audience member suggested that Denver's next mayor — Roberts, who hopes to succeed the term-limited Hancock — was on the stage beside Rubinstein. The comment prompted a smile from Roberts, but he quickly turned serious, arguing that the local press — and specifically 9News — has essentially ignored his candidacy.

There are exceptions to this rule: Westword discussed Roberts's run in a post about a lawsuit he'd filed against the Denver Police Department for allegedly pepper-spraying him during the 2020 George Floyd protests downtown. But as witnessed by the attention paid yesterday to state senator Chris Hansen's November 14 announcement that he was joining the mayor's race, coverage varies widely from person to person.

Here's the complete list of candidates who've filed paperwork to run for mayor so far, along with the date the documents were submitted, as seen on Denver's candidates-and-initiative-tracking web page.

This list doesn't include nightclub owner Valentes Corleons, who told Westword he was running for mayor in September but apparently hasn't submitted any paperwork.

The Wikipedia page devoted to the 2023 Denver mayoral election refers to Giavanni as a "perennial candidate," and the description is apt; he filed a complaint against the city after being excluded from the mayoral ballot in 2011, and memorably refused to participate in a Westword Q&A about the 2019 contest. Both Simpson and Wolf also sought the office in 2011; click to read Westword interviews with Simpson and Wolf from that year.

Alex Cowans is another unconventional candidate; his Facebook page notes that he's making himself available to meet with voters from 2 to 5 p.m. Fridays on the 16th Street Mall. Rougeot's website identifies him as "a father, former United States Army Officer, and small business owner." Parris is a homeless advocate and 2019 Denver City Council candidate whose fundraising page promotes "people over profits." Burrell is the CEO and founder of Twiggs & Co., a sustainability consulting and implementation firm. Tafoya is the Colorado state director of the environmental group Green Latinos. And Martinez is the president and CEO of IBtv Viewvision, a streaming-TV service.

As for the candidates getting more love from the media, they include Brough, the former CEO of the Denver Metro Chamber of Commerce and onetime chief of staff to John Hickenlooper when he served as mayor; Calderón, executive director of Emerge Colorado and past chief of staff to city council member Candi CdeBaca; state representative Herod; ex-city council member Ortega; and Hansen. Other people are rumored to still be looking at a run, including Mike Johnston, a former state senator who also figures in The Holly.

Hancock wasn't at the November 10 screening of the film, but a couple of other public officials did show up: Denver District Attorney Beth McCann and councilmember CdeBaca. And Roberts was able to share his mayoral ambitions with that audience, even if getting the word out via the traditional media is proving to be a challenge.
KEEP WESTWORD FREE... Since we started Westword, it has been defined as the free, independent voice of Denver, and we'd like to keep it that way. With local media under siege, it's more important than ever for us to rally support behind funding our local journalism. You can help by participating in our "I Support" program, allowing us to keep offering readers access to our incisive coverage of local news, food and culture with no paywalls.
Make a one-time donation today for as little as $1.