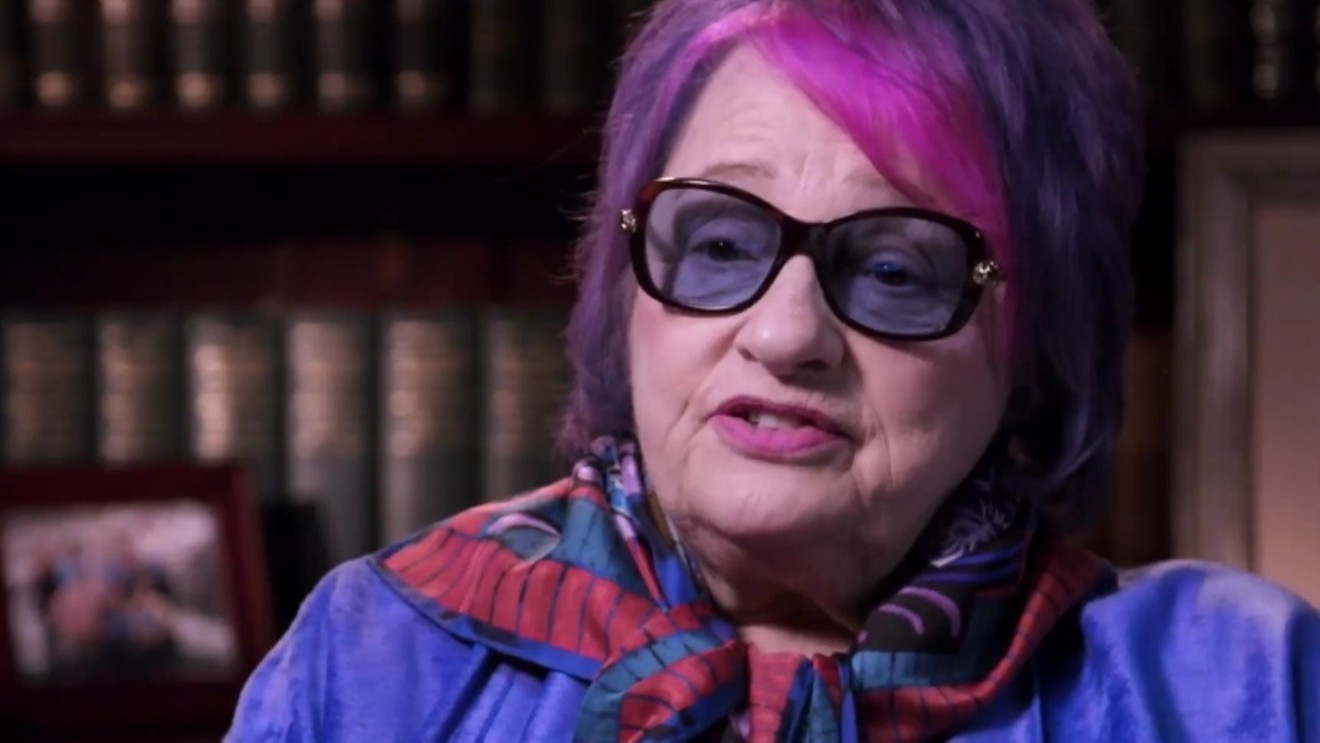 Susan Polis Schutz as seen in Love Wins Over Hate. IronZeal Films
When President Donald Trump used the phrase "Stand back and stand by" in reference to the white nationalist group known as the Proud Boys during his September 29 "debate" against former Vice President Joe Biden, Susan Polis Schutz was appalled — and for good reason. The mother of Governor Jared Polis is also a filmmaker, and she's spent most of 2020 completing Love Wins Over Hate, a documentary examining the rise of racist organizations in the U.S. through conversations with former members trying to make amends for their past actions by helping others grow beyond their biases. The film is already appearing on PBS stations across the country and will debut on two Denver outlets in the coming days.

"I'm still reeling from it," Polis Schutz says of Trump's statement. "It was a nightmare. It was so horrible. ... He was trying to couch his enthusiasm for them in words you had to think about. But it was so vitriolic and mean and demeaning to the presidency and the United States."

Beyond that, Polis Schutz feels that Trump's willingness to play footsie with white supremacists for political purposes is creating fertile ground for even more groups of this sort to sprout. "Every single one of the people I interviewed said that hate crimes are expanding and the climate is way more hateful now than ever before," she notes. "They all said it's dangerous, and they're working full-time to try to help alleviate it."

Here's the trailer for Love Wins Over Hate:


The genesis for her latest project emerged from Polis Schutz's daily routine. "When I have my coffee in the morning, I always watch the news, and I also look through social media at articles — and every day, I could see all of this hatred and anger and divisiveness," she recalls. "It made me completely confused and sad and feeling like our beautiful world was being totally ruined. But then I started to wonder, 'Why do people hate so much?' and if these people could change."

Her initial approach was to "interview people who were prejudiced, and I did — but that wasn't the way to go. These people didn't think they were prejudiced; they thought I was prejudiced," she says. "But then I read an article about Christian Picciolini, who had been a white supremacist for many years, had committed violence and all of that, but then left the movement and changed, and he's now helped something like 400 people change, too."

Polis Schutz subsequently chatted by phone with around twenty former white supremacists in order to find the six who are at the center of the film, including Picciolini, Shannon Foley Martinez and Arno Michaelis, whose "Love Wins" tattoos on his fingers inspired the project's title. She also interviewed "five people who have borne the brunt of prejudice, and three of them live in Colorado," she notes. "One is a Muslim, one is a Black gay woman and one is transgender, and they talk about how hurtful it is when people use slurs against them, don't want them living next door or coming into their stores — and also about the violence against them."

The timing of these chats proved fortuitous. "I was very lucky, because I ended the interviews with everyone in February," Polis Schutz says, just before the COVID-19 pandemic hit full force. The next month, Governor Polis issued a stay-at-home order for the state, and even though the edict has now expired, Polis Schutz, who's at increased vulnerability because of her age, is continuing to abide by it.

"I started isolating in March, and since then, the only person other than my husband [Dr. Steven Schutz] that I've seen is my dentist," she reveals, laughing. "If I had a list of people I most wanted to see, my dentist wouldn't have been on it."

The decision to continue self-quarantining complicated the completion of Love Wins Over Hate. "My editor, David Emrich, lives in Denver, and I was in California at the time, before I came back here," she says. "We had over fifty hours of interviews, and usually, my editor and I work next to each other. But we ended up using Skype for the entire film. It wasn't so efficient; it was just really hard. But it worked. We started editing in March and got done probably around the end of August." 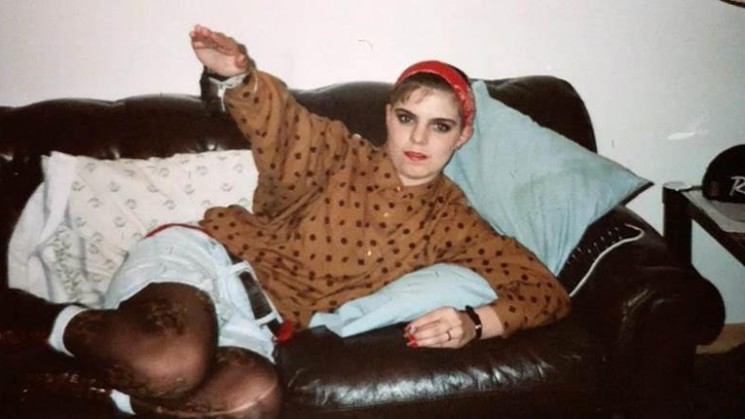 An old photo of Shannon Foley Martinez, who now rejects the white supremacist worldview she once embraced, as seen in Love Wins Over Hate.
IronZeal Films
She insisted on this tight time frame because "I felt an urgency to get the film out as quickly as possible, and thank God David understood," Polis Schutz says. "We worked relentlessly on it, and I didn't have interruptions, which was one of the best things about isolating. I could just keep plowing in on it, and that's why I was able to finish it so quickly."

She got another assist from an unexpected source: her grandson. The nine-year-old son of Polis and partner Marlon Reis is a budding musician who contributed three songs to the production, including one that plays over the closing credits. "He FaceTimes me and plays little concerts, and they're just beautiful," she enthuses.

"I haven't seen Jared or Marlon or either of the kids since January, and that's the hardest thing, because we're really close," she says, expanding on a theme she emphasized while appearing remotely at her son's May 28 press conference about COVID-19. "All my life, Jared has called me every day, but I also see him a lot — and I haven't seen anybody. So we do a lot of Zoom, which I don't particularly like, and FaceTime, which is better than nothing, but not like hugging in person."

For Polis Schutz, the common thread of Love Wins Over Hate "is that people can change, and how important it is to meet diverse people and then connect with them in a one-on-one conversation. That's what all of the people I interviewed recommend, and it's not that hard. You meet someone you think you hate and you talk with them and see there are a lot of commonalities. After you sit down with someone over dinner and talk about your kids, that's when the humanity comes into play."

Hate crimes and white supremacist groups were on the rise even before Trump was elected in 2016, but Polis Schutz believes "it sort of crystallized after the pandemic started. We were hearing so much vitriolic language and hate coming from everywhere, everywhere" — including the presidential debate stage.

Love Wins Over Hate is scheduled to air on Denver PBS Channel 12 at 8 p.m. on Thursday, October 8, and midnight Friday, October 9, as well as on Rocky Mountain PBS at 8 p.m. on Thursday, October 29.
KEEP WESTWORD FREE... Since we started Westword, it has been defined as the free, independent voice of Denver, and we'd like to keep it that way. With local media under siege, it's more important than ever for us to rally support behind funding our local journalism. You can help by participating in our "I Support" program, allowing us to keep offering readers access to our incisive coverage of local news, food and culture with no paywalls.
Make a one-time donation today for as little as $1.