Javier Acevedo Double-Murder Timeline: How the System Failed to Protect His Victims 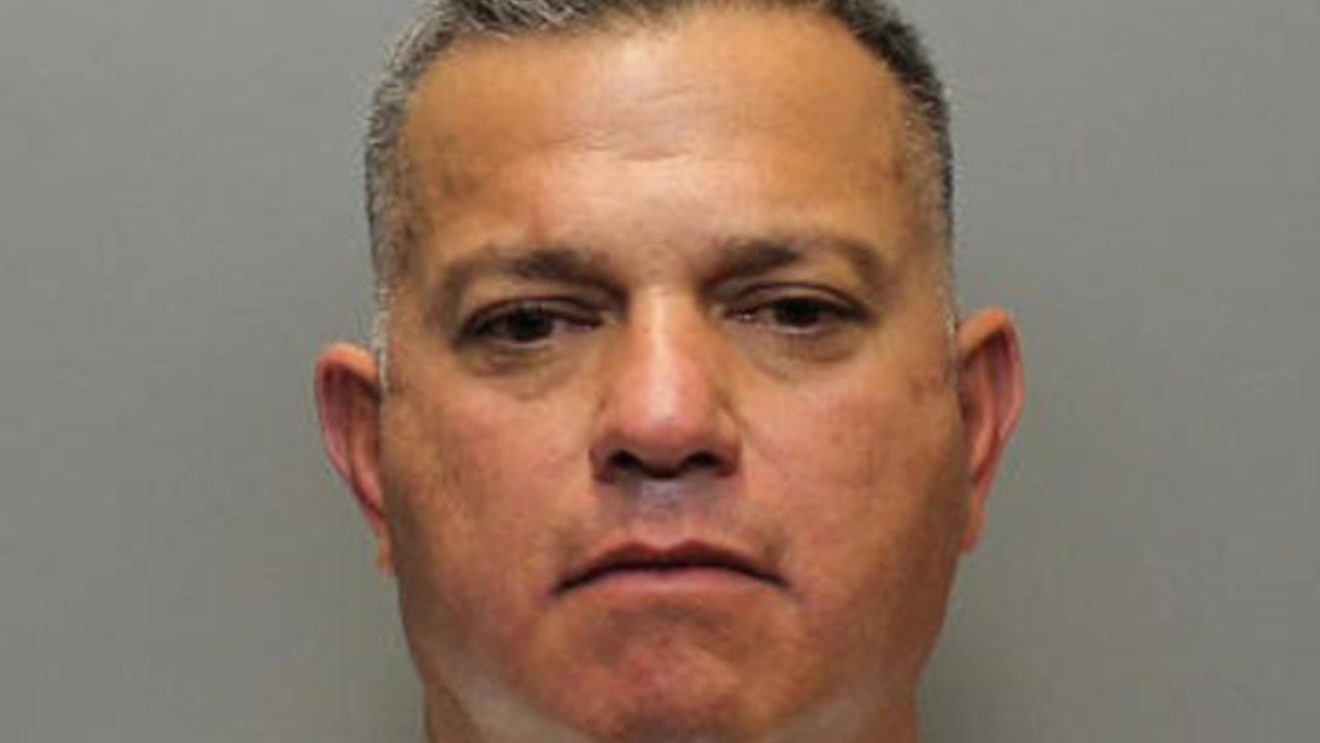 A 2021 booking photo of Javier Acevedo. Larimer County Sheriff's Office
The Loveland Police Department has been the focus of numerous controversies over the past year — and it's in the eye of the hurricane again owing to the media furor surrounding the case of Erie's Javier Acevedo, 49, who shot and killed his ex-girlfriend, Lindsay Daum, and her daughter, sixteen-year-old Meadow Sinner, before committing suicide on July 28.

The newly released LPD timeline of the incident reveals that there's plenty of blame to go around regarding Acevedo, the subject of multiple requests for protection orders since last year, including one that was rejected mere weeks before his deadly actions. Indeed, the sequence of events suggests a systemic failure at multiple levels.

The negative headlines generated by the Loveland Police Department began with the release of video showing the rough arrest of Karen Garner, a 73-year-old with dementia, over a minor shoplifting allegation, which ultimately led to a $3 million settlement last September. Other matters that cast the department in a dubious light include the 2021 police killing of teenager Alex Domina, who was suffering a mental health crisis; an alleged DUI arrest scheme; and an independent probe launched in June regarding a 2020 episode during which a man, Jon Siers, was tased, a girl was left bruised and battered, and a family dog was choked amid the investigation into a slap between teenagers in the parking lot of a Safeway grocery store.

The first LPD news release about the latest tragedy notes that officers were called to the area of Aries Drive and Pavo Court at approximately 2:22 p.m. on July 28 for a "weapons complaint." Subsequent 911 calls revealed that "victims had been shot and it was unknown if the suspect was still in the home. Three juveniles remained in the home, hiding." 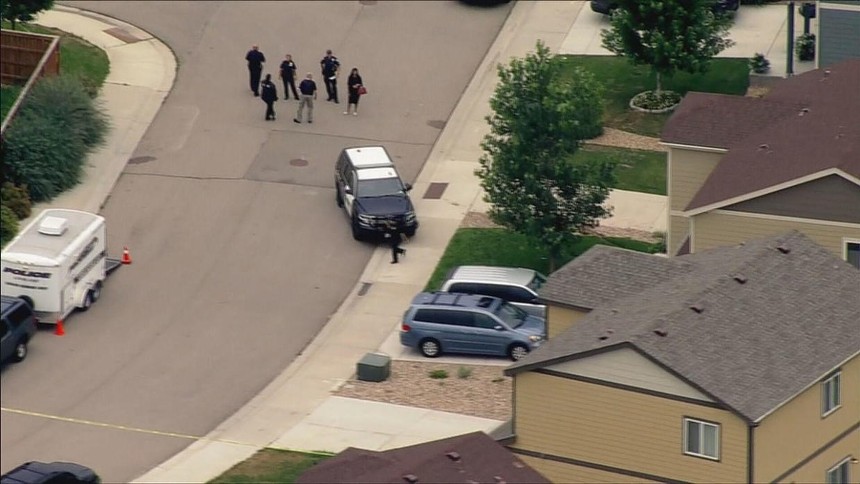 An aerial view of the scene near Aries Drive and Pavo Court in Loveland.
Courtesy of CBS4 Denver
At that point, a SWAT team was deployed and managed to safely remove the children before searching the home and discovering that the suspect, identified as Acevedo, had fled. Law enforcement officials from various agencies ultimately tracked him to the area of 600 Grimson Place in Erie, where he was found dead from an apparently self-inflicted gunshot wound.

A July 29 Loveland Police dispatch added more details. The 911 calls had been made by two of the kids, and they indicated that Sinner and Daum had been shot. Shortly thereafter, police began tracking Acevedo's phone signal, which emanated from an area where a witness had reported seeing a man with a long gun. Around that time, the Denver Air 1 helicopter was sent to the scene, and officers on board saw Acevedo pointing the firearm in his direction. "At 5:13 p.m., Denver Air 1 reported the suspect had shot himself and was done," the dispatch reported.

In the days that followed, news broke regarding Acevedo's criminal past — in October 2021, he was arrested on suspicion of sexually assaulting a minor — and the assorted protection orders. That led to a third news release from the Loveland Police Department on August 3 "due to overwhelming public interest."


• On March 16, 2021, Javier Acevedo, Jr. legally purchased a 12 gauge Tokarev Monastor-102 semi-automatic Shotgun.
• On June 18, 2021, a Denver County Court issued a protection order against Acevedo in case number 21GS003699, with a named protected party that was not Daum. This order required Acevedo to relinquish any firearms in his possession and prohibited him from possessing, purchasing, or controlling a firearm or other weapon. The Loveland Police Department defers to Denver County Court on the specifics of this order.
• On September 1, 2021, Lindsay Daum filed a petition for a protection order against Acevedo in a Larimer County Court, case number 21C221, naming herself and three juveniles in the residence as protected parties. On that same day, a Temporary Protection Order was issued for Daum and three juveniles.
• On September 15, 2021, Acevedo did not appear for the Permanent Restraining Order Hearing, but his attorney appeared and waived service and requested a continuance of the hearing. The Court granted the request and re-set the hearing for September 28, 2021.
• On September 28, 2021, all parties appeared and the Court denied a Permanent Protection Order. This denial vacated the Temporary Protection Order issued on September 1, 2021, and the case was closed. The Loveland Police Department defers to the Larimer County Court on the specifics involved in the hearing for this order.

The Larimer County Court has not yet issued a statement about the September 28 denial of the temporary protection order. But Raymond Daniel, spokesperson for the 8th Judicial DA's Office, offered this response to Westword: "Civil Protection Orders are not requested or maintained by the District Attorney's Office and are separate proceedings from any criminal case. Our understanding is that no active Civil Protection Orders existed on July 28, 2022, though the District Attorney's office is not provided details from civil hearings or what such rulings are based on, and you would need to contact the Court to request those documents. However, in a separate criminal case in which Mr. Acevedo was the defendant, our office requested a Criminal No Contact order with the juvenile victims of the criminal case and their residence and the Court granted that order on November 4, 2021. That order remained active and Mr. Acevedo was therefore prohibited from contact with the juvenile victim on July 28, 2022, as well as all other persons at the Pavo Court residence, which at the time included Ms. Daum."

A GoFundMe page has been set up in the names of Daum and Sinner. Its introduction:


Meadow Sinner and her mom Lindsay Daum were tragically killed on July 28th, 2022 in an act of domestic violence. We are raising money to support the family during this unspeakably difficult time. Left behind are four children under the age of 14, who will be taken care of by Lindsay’s mom. It’ll be a long and challenging road ahead for the family and anything you can do to support is sincerely appreciated.

Meadow was only 16 and one of the most beautiful and vibrant souls we have ever met. She was a leader in the Colorado Youth Congress and was working with her peers to improve mental health support in schools. Inside CYC, Meadow held the role of community builder — she was the one we trusted to begin all of our meetings because her charisma and humor were so infectious. She had the power to transform the energy of a room in a matter of seconds, and that’s one of the many reasons we loved her so deeply. Meadow was also brave, vulnerable, and deeply in love with her family and her community. Her death will leave an irreparable hole in the hearts of all that knew and loved her.

Meadow’s mom, Lindsay, was a committed and caring mother. She loved being a mom more than anything else in the world.

Thank you for your support. May Meadow and Lindsay’s legacy be one of love and care.

This post has been updated to include a comment from 8th Judicial District DA's Office spokesperson Raymond Daniel.
KEEP WESTWORD FREE... Since we started Westword, it has been defined as the free, independent voice of Denver, and we'd like to keep it that way. With local media under siege, it's more important than ever for us to rally support behind funding our local journalism. You can help by participating in our "I Support" program, allowing us to keep offering readers access to our incisive coverage of local news, food and culture with no paywalls.
Make a one-time donation today for as little as $1.