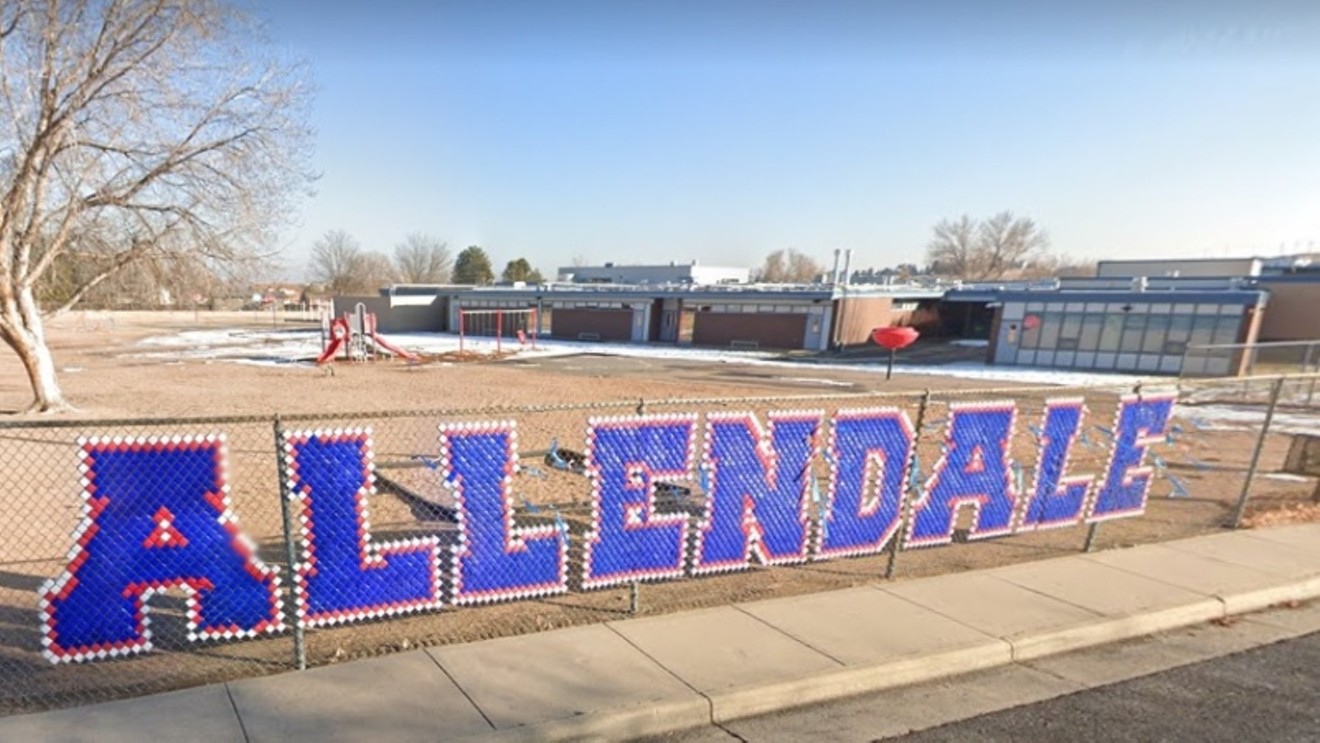 Allendale Elementary, at 5900 Oak Street and Arvada, was closed at the end of the most recent school year. Google Maps
Another indication that metro Denver's enormous growth in recent years has started to flag: A July 26 meeting of the board of education for Jefferson County Public Schools focused largely on school closures and consolidation.

This process is already underway: At the end of the 2021-2022 school year, JCPS shut down a pair of elementary schools that served Arvada, Allendale and Fitzmorris. But more facilities are likely to be mothballed or combined in the near future, owing in large part to recent demographic trends. Despite the common belief that Colorado is booming, statistics from the U.S. Census Bureau show that nineteen counties in the state saw natural population declines from 2020 to 2021, with the largest slumps registered by Denver and Jefferson counties.

This development came as no surprise to state demographer Elizabeth Garner. The peak for births in the United States was 2007, Garner recently told Westword; Colorado is currently recording about 8,000 fewer births than during that year, and the fallout from this development is already being felt.

"If someone was born in 2007, that would make that person somewhere between fourteen and fifteen years old," Garner explained. "But that means there are fewer thirteen-year-olds, fewer twelve-year-olds and fewer eleven-year-olds. Once those fourteen- and fifteen-year-olds age, we'll see absolute declines behind them in terms of total people in Colorado. And that also means fewer people going through the education system. Right now, K-12 schools are looking at that, because that's the population affected."

The ripple effects were outlined in the recent post "Inside Possible Denver Public Schools Closures, Consolidations." In January, Denver Public Schools superintendent Dr. Alex Marrero announced plans to grapple with what DPS media relations manager Scott Pribble said was "an anticipated 6 percent decline in enrollment over the next five years." A group of parents, teachers, staffers and community partners dubbed the Declining Enrollment Advisory Committee is currently looking at options, although Pribble stressed that "any school selected for closure would not close until the end of the 2023-2024 school year."

At last night's Jeffco board of education meeting, the subject was explored in a slideshow with a title intended to dial down potential panic over the situation: "Regional Opportunities for Thriving Schools." But the numbers and graphics unveiled revealed plenty of reasons for concern.

According to the presentation, Jefferson County Public Schools is Colorado's second-largest school district (behind DPS), serving 8 percent of all K-12 students in the state at 155 schools on 168 campuses. However, Colorado as a whole saw a decline of 30,000 students at K-12 schools after the beginning of the COVID-19 pandemic, and figures from the Colorado Department of Education indicate that Jeffco was hit the hardest, losing more than 5,000 students from 2019 to 2022. Moreover, Jefferson County census figures demonstrate that the population of school-age children (five to nineteen) decreased by 29,918 from 2000 to 2020, when the area recorded the lowest number of births in fifteen years.

This graphic illustrates enrollment dips over the past half-decade: 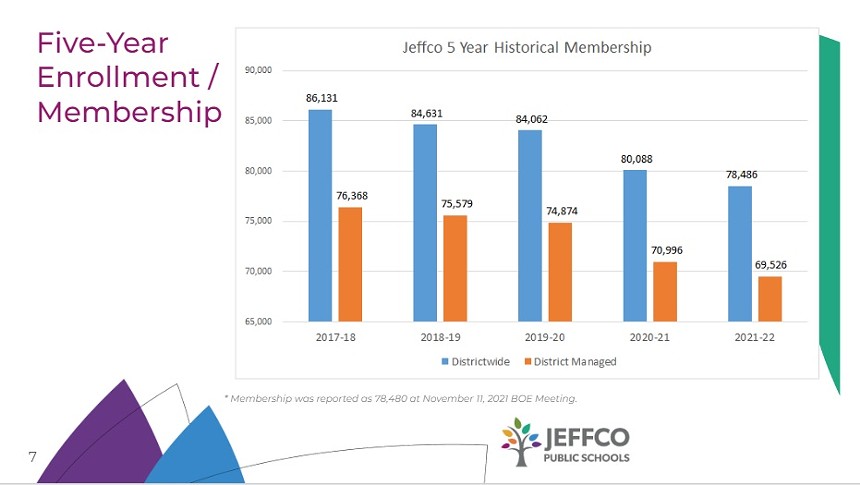 Jefferson County Public Schools
Enrollment figures for the 2021-22 academic year are particularly worrisome. While Jefferson County could have provided education for 39,900 K-5 students in 85 traditional elementary schools over that span, only 25,600 were enrolled. Additionally, 49 elementary schools, representing 58 percent of the total, had a "student population under 250 and/or a building utilization of 60 percent or less," another slide notes. "Combined, they have 10,600-plus empty seats." 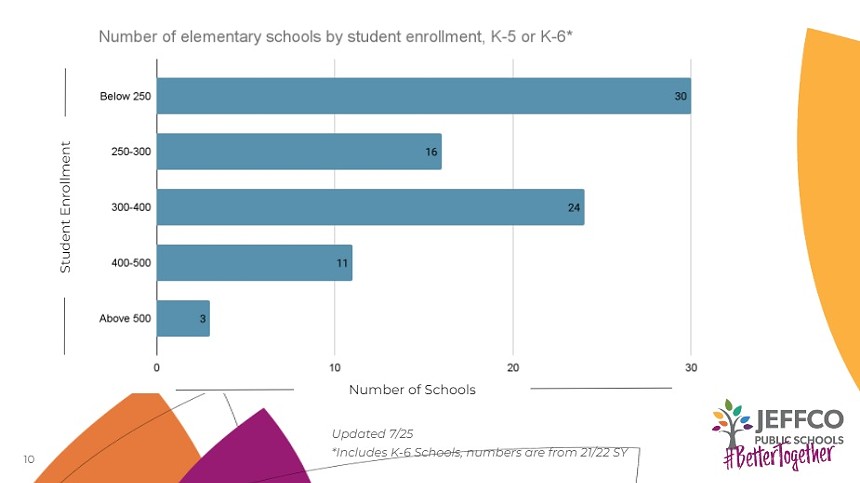 Jefferson County Public Schools
No new school closures were announced at the meeting, but the Jefferson County Education Association, the district's main teachers' union, is clearly preparing for change. A JCEA statement notes that while the organization "has not yet taken a position on the potential consolidation and closure of schools," it believes "all students deserve access to a high quality education which provides them with opportunities to learn from peers who represent the diversity of the Jeffco community. This is not possible in schools where classroom enrollment is so low it does not include a variety of student voices."
KEEP WESTWORD FREE... Since we started Westword, it has been defined as the free, independent voice of Denver, and we'd like to keep it that way. With local media under siege, it's more important than ever for us to rally support behind funding our local journalism. You can help by participating in our "I Support" program, allowing us to keep offering readers access to our incisive coverage of local news, food and culture with no paywalls.
Make a one-time donation today for as little as $1.