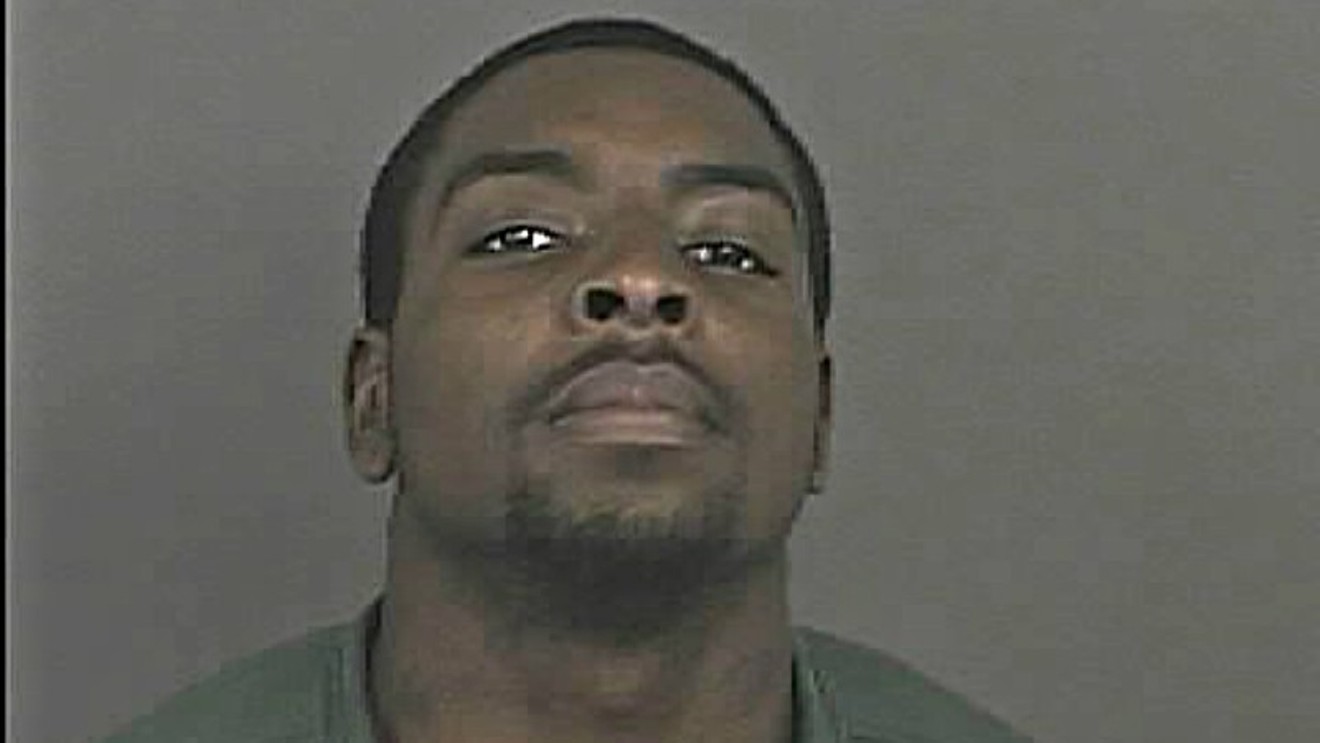 Kenneth Banks's most recent booking photo. Denver District Attorney's Office
On November 20, Kenneth Banks pleaded guilty to first-degree murder in the death of Fallon Graham, a mother of two shot down outside Aurora's Montview Bar & Grill two years to the day earlier. He did the same late last month in regard to two Denver murders, including the slaying of D'Andre Mayfield in a drive-by shooting. All three crimes took place during the same three-day period in 2015, and each is said to have been gang-related. Indeed, the prosecutor who effectively handed Banks the third of three life sentences without the possibility of parole says he opened fire on Graham because her companion had chosen to wear the wrong color shoes.

At yesterday's hearing, Tarik Sheikh, senior deputy DA for the 17th Judicial District, said, "This was senseless. This was pointless. His only motivation was to gain credibility with the Crips. He hunted a Blood that night. He saw a guy with red sneakers on and shot him."

Banks was twenty at the time of the homicides, the third of which involved fatally shooting Joel Gomez-Chavez through his bedroom window because of perceived disrespect. He evaded authorities for months before being taken into custody in California circa mid-2016. Since then, details of the murders have slowly filtered out — and they're chilling.

At this writing, the police report about the killing of Mayfield remains sealed. However, Denver District Attorney's Office spokesman Ken Lane notes that Banks confessed to repeatedly pulling a weapon's trigger at around 4:45 a.m. on November 23, 2015, as Mayfield sat in a vehicle on the 4700 block of Peoria Street.

More specifics about the Mayfield case can be found in the unsealed arrest affidavit related to the Gomez-Chavez homicide, which is accessible below. The document states that nine .40 caliber shell casings were found where Mayfield was murdered, and they matched those recovered from outside an apartment on the 3300 block of Dahlia Street, where Gomez-Chavez's life was taken three days earlier.

D'Andre Mayfield shared this photo on Facebook two months prior to his violent death.
Facebook
Other matching shell casings turned up outside the Montview Bar, where Graham was shot and killed at about 1:25 a.m. on November 20 while in the company of Michael Vincent Green, the 34-year-old wearer of the red sneakers. Green was also injured in the fusillade, which was unleashed six hours before Gomez-Chavez's mother called 911 to report that her son had been shot.

The Gomez-Chavez affidavit reveals that emergency responders found the victim's body lying on the floor in the area that linked his bedroom to a hallway. He was declared dead at the scene.

In the meantime, investigators concluded that the fatal shots had been fired through the bedroom window from the alley behind the apartment.

Shortly thereafter, alerts went out for Banks. He couldn't be found in Colorado over the weeks and months that followed, but he was eventually taken into police custody in Sacramento, where two Denver detectives traveled to interview him in June 2016.

The alley behind the apartment complex on the 3300 block of Dahlia Street where Joel Gomez-Chavez was fatally shot.
Google Maps
By the time they arrived, Banks had already admitted to blasting Mayfield. But although he acknowledged that he'd been present at Gomez-Chavez's murder, he insisted that he'd merely been a bystander and identified two other people who had supposedly been the ones behind the guns. Their names are blacked out in the affidavit.

By September, after he'd taken up residence in Adams County Jail, Banks changed his story. During another interview with a detective, he admitted to being the one who'd climbed from a car in the alley behind Gomez-Chavez's apartment and started, in his word, "busting."

According to Banks, he and Gomez-Chavez previously had what the police report characterizes as a "racial altercation" at an after-hours club on Fox Street that left him feeling disrespected. He later found out where Gomez-Chavez lived from what he called "bitches" and showed up drunk and on drugs in the company of two buddies who were merely observers. He said he was "tripping" when he pulled into the alley and located the light from Gomez-Chavez's bedroom window.

At that point, Banks revealed, he knocked on the window, and when Gomez-Chavez looked through the shade to see who was there, he "aired it out" with his handgun. He was uncertain how many times he fired.

A family photo of Fallon Graham.
taylormortuary.com
Banks didn't get much of a deal for pleading guilty to these crimes — unless he thinks he might have been targeted with the death penalty had he not done so. On October 27, he was given two life sentences without the possibility of parole to be served concurrently.

Just over three weeks later, Banks was back in court for killing Graham, whose obituary points out that she was born in El Paso, Texas, and earned an associate's degree from Everest College. She married in 2007 and had two kids of her own in addition to acting as a stepmother to three stepdaughters. Along the way, she worked for Sprint and was self-employed as a cheerleading instructor.

"Everyone loved her humor, determination and drive for success," the obituary emphasizes. "She was deeply loved and will be greatly missed. To know Fallon was to love her."

The Graham hearing began on November 17 and was continued until November 20, when Banks pleaded guilty to first-degree murder and attempted first-degree murder. After doing so, Adams County Judge Don Quick immediately sentenced him to life without parole plus 32 years for wounding Green.

The three life sentences will be served concurrently. Click to read the Kenneth Banks arrest affidavit in the Gomez-Chavez case.