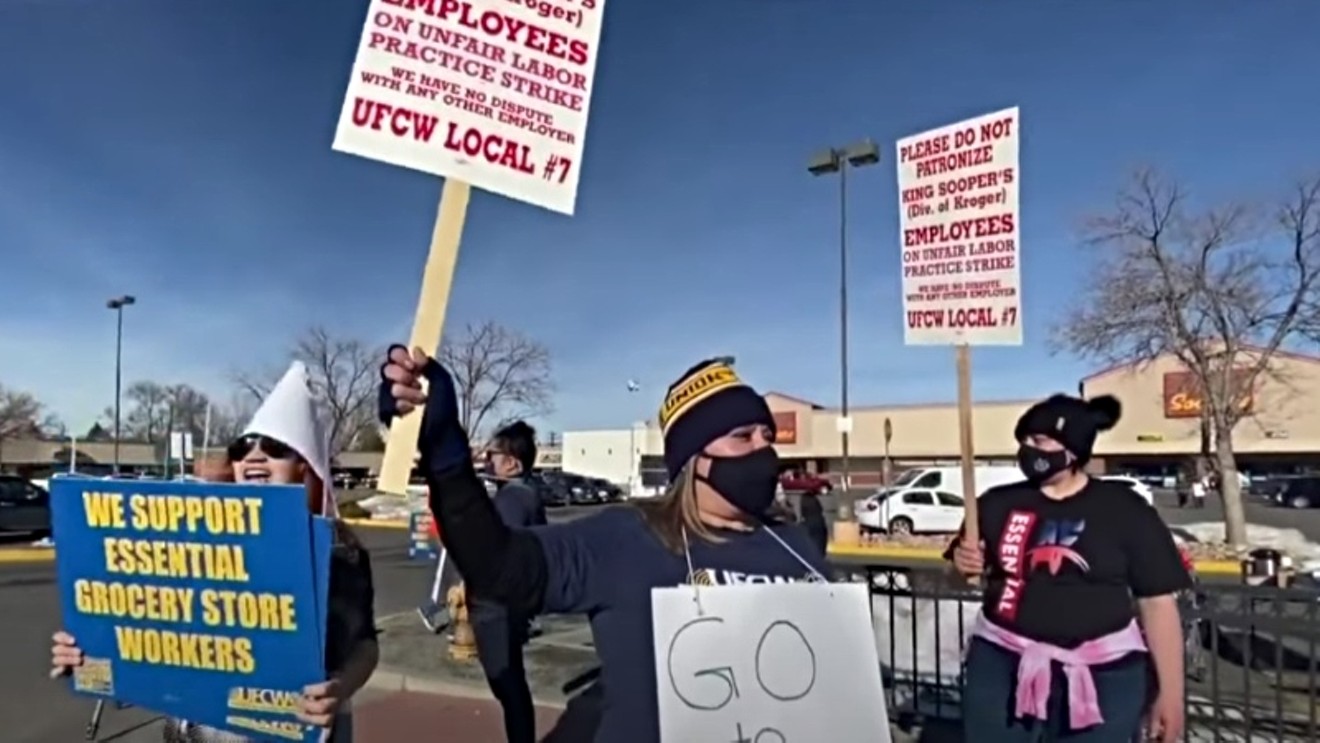 UFCW Local 7 workers are protesting at King Soopers stores in greater Denver. Denver7 via YouTube
Editor's note: The members of United Food and Commercial Workers Local 7 have ended their labor action against King Soopers. Get details in our post "King Soopers, Union Reach Tentative Agreement to End Strike." Continue for our previous coverage.

The strike by United Food and Commercial Workers Local 7 against King Soopers, the largest grocery chain in Colorado, has only been underway since January 12. But there are already signs of movement, represented by the union's willingness to resume negotiations and a relatively upbeat response from the company.

UFCW Local 7's last strike against King Soopers took place in 1996 and lasted 42 days. But the Kroger-owned company is currently facing challenges that would have been difficult to imagine a quarter-century ago, including an ongoing pandemic that has led to both a shortage of supplies and workers.

During the first hour on the picket line at the Ken Caryl branch, a twenty-year King Soopers veteran noted that the store has been extremely understaffed, and many union members had been working eighty-hour weeks in a desperate attempt to keep shelves stocked. Even so, some specialty areas have had to close or limit hours, and the strike has only exacerbated this situation. On January 13, customers who use King Soopers pharmacies received a text message that read, "King Soopers Rx: Your local pharmacy will be open with reduced hours and may be closed on Sundays temporarily. We apologize for any inconvenience."

Meanwhile, there was the ticking clock represented by the announced January 20 relaunch of the Table Mesa King Soopers in Boulder — the site of a March 2021 mass shooting that killed ten people, including three employees. Local 7 president and UFCW International vice president Kim Cordova told Westword that the union would picket the store if it reopened on schedule and the dispute had not been settled. But after the publication of our post, King Soopers announced that the opening would be delayed; no new date has been divulged.

But there could be action before then. During the strike, King Soopers has been offering temporary workers $18 per hour — in the range of the starting salary demanded by Local 7 and at least $2 more than the wage listed in the company's latest proposal.

On January 13, Cordova sent a letter to King Soopers boss Joe Kelley offering a return to the negotiating table under a number of conditions, including that Kelley be personally involved in the talks. Hours later, the company sent the following statement to the Denver Gazette: "We are pleased that after nearly a week the union has finally responded to our request to meet. We look forward to returning to the bargaining table to resume negotiations and find a deal that puts more money in our associates' paycheck."

This message contains no specifics about a time or place — the union has proposed an 11 a.m. sit-down today, January 14, at the Denver Marriott Tech Center that would be closed to the press — and no details about Kelley's potential participation. But the communication between the two sides suggests at least the possibility that a truce could be in the offing.

This post has been updated to include information about a delay in the reopening of the Table Mesa King Soopers branch.
KEEP WESTWORD FREE... Since we started Westword, it has been defined as the free, independent voice of Denver, and we'd like to keep it that way. With local media under siege, it's more important than ever for us to rally support behind funding our local journalism. You can help by participating in our "I Support" program, allowing us to keep offering readers access to our incisive coverage of local news, food and culture with no paywalls.
Make a one-time donation today for as little as $1.