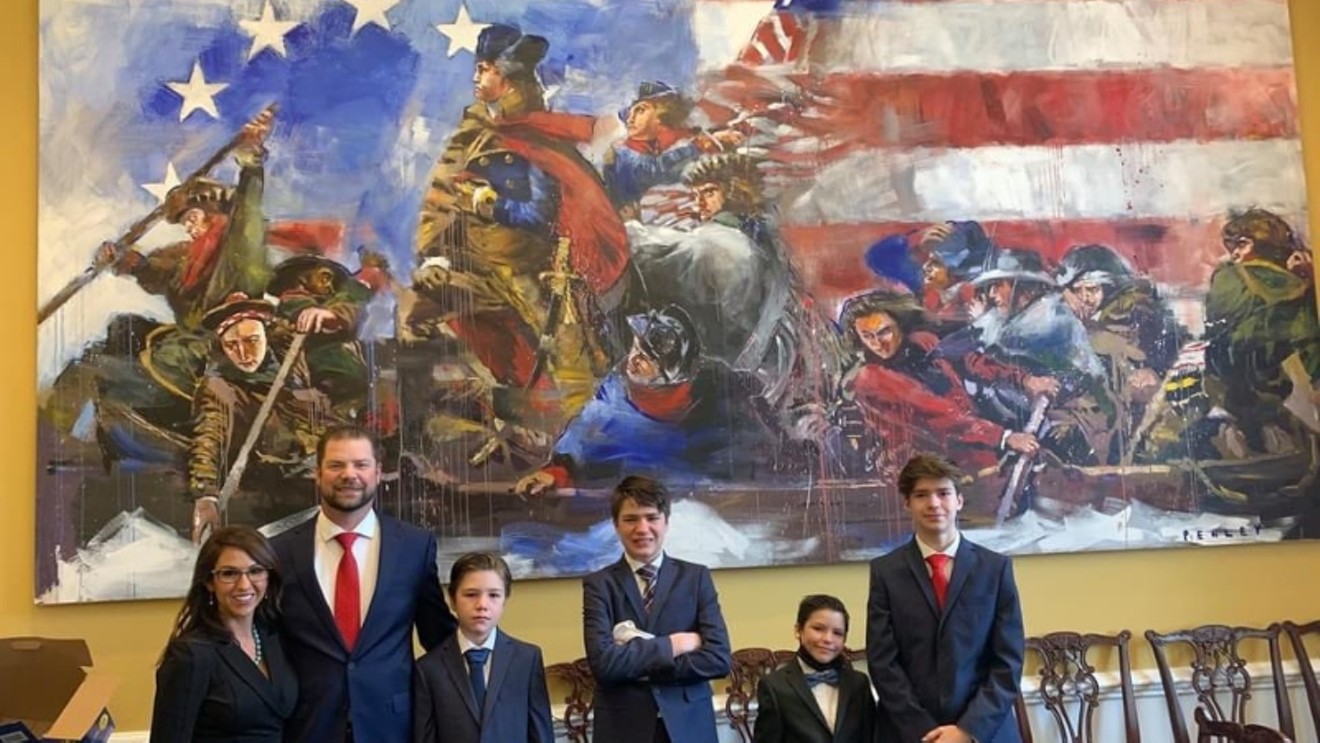 Representative Lauren Boebert and her family pose before a painting that honors the Revolutionary War to celebrate her congressional swearing in. @laurenboebert
Only a few days into her term as U.S. Representative for Colorado's 3rd Congressional District, Lauren Boebert is already being inundated with calls for her to resign the position or risk being expelled by her new colleagues for allegedly helping to incite the violence that took place in Washington, D.C., on January 6. And these efforts are getting national attention, with CNN putting a report about the controversial firebrand in heavy rotation over this past weekend.

For her part, Boebert has made it clear that she doesn't plan to go anywhere despite the furor created by Coloradans who voted against her and those who wish they could have.

Boebert's election was an indication that while Colorado may be a largely blue state at this point, it's hardly monochromatic. While the 3rd CD is not as conservative as it once was, it remains a GOP stronghold loaded with longtime residents who see Boebert — a fervent Second Amendment advocate from Rifle who co-owns Shooters Grill, a restaurant at which the waitstaff packs heat — as a bold and charismatic figure.

As a result, a majority of district voters ignored numerous warning signs about Boebert's extremism — including her onetime campaign manager's praise of the thuggish Proud Boys and her own rhapsodizing about QAnon on a podcast friendly to the loony conspiracist organization — and pushed her to victory this past November. And since then, she's remained on-brand, announcing with great ballyhoo her plan to carry a Glock handgun while in the nation's capital, much to the alarm of local law enforcement.

This move took on a different tone after the events of January 6, when Congress was scheduled to certify the election of Joe Biden as the next president — something Boebert opposed based on completely fictional claims of voter fraud promoted by her political hero, President Donald Trump. The CNN piece spotlighted two Boebert tweets from earlier that day — the first reading "Today is 1776," the second stressing that "America is depending on us today. This is something I don't take lightly. I will fight with everything I have to ensure the fairness of this election."

In the last sentence, CNN highlighted the word "fight."

As the riot ramped up, Boebert continued tweeting on her personal account, whose introduction includes the line "Follow me on Parler," the divisive platform for racism and white supremacy founded by two University of Denver attendees that was just banned by Amazon, Apple and Google. Her critics contend that one message mentioning that House Majority Leader Nancy Pelosi had been removed from the main chamber showed that she was secretly communicating with insurrectionists — a claim mighty hard to prove despite circumstantial evidence. But Boebert's video statement about the riot, tweeted on January 8, was certainly no mea culpa.

Granted, Boebert was critical of the rioters, who "were not conservatives," she said. "Conservatives don't tear our country down. We build our country up." But this mild rebuke followed plenty of finger-pointing at liberals. "I want you all to know how proud I am to have taken a stand on the Electoral College certification," she continued. "The onslaught that we have seen on our Electoral College from the Democrats was what got me involved with this to begin with." She also asserted that the Dems want to control the lives of every citizen, adding, "Hold onto your faith. It's going to be a bumpy ride. But we are Americans — and we will find a way to persevere."


We are the United States of America. Freedom will find a way to persevere. God bless each and every one of you. You are all in my prayers. pic.twitter.com/EoOAbJVeMa

Even more stunningly, Boebert followed up this clip with a January 9 tweet in which she contended that "Democrats have normalized violence and proved it to be an effective tool to advance an agenda. They now have the control they’ve been pursuing and their first act is a social media purge" — an obvious reference to Twitter's decision to permanently suspend Trump's account. In her words, "Republicans have to end this attack on free speech."

In an expression of their own thoughts, the members of Rural Colorado United staged what they dubbed two "rallies in support of Lauren Boebert's expulsion from Congress" on January 8.

The previous day, numerous elected officials, political leaders and groups across the state had sent an open letter to Boebert and Representative Doug Lamborn, who also voted against certifying Biden's win, demanding they resign. "The events of January 6th 2021, which you each incited and directly encouraged, were a blatant assault on our country," the letter reads. "Your role in [the] violent failed coup makes you unworthy, and undeserving of the honor of representing Colorado in Congress. You violated the oath of office you took mere days ago — therefore we demand your immediate resignation and an end to your fanning of the flames that caused this attempted coup at once."

Here's the complete text of the letter, along with the names of the progressive elected officials, individuals and organizations that signed it.

The final congressional proceedings to certify Joe Biden’s victory were disrupted yesterday by a terrorist attack in support of outgoing President Donald Trump, storming the U.S. Capitol and forcing the evacuation of elected officials and the lockdown of the United States Capitol building. In response, a broad, diverse coalition of undersigned progressive advocacy groups and leaders in Colorado are demanding your immediate resignation for your role in inciting the violence and insurrection that gripped Washington, D.C. and claimed the lives of at least four Americans. Our organizations collectively believe in democracy as a tool to create a more just and fair world — and we believe in steadfastly upholding the basic tenets of that democracy to secure a free and fair society. Since you have badly failed to do so, your immediate resignation is now warranted and necessary.

The basic and fundamental responsibilities of our elected officials are to represent the will of the people — to uphold the tenets of our Constitution and respect our democratic institutions. You, Rep. Lauren Boebert and Rep. Doug Lamborn, have betrayed the trust of Colorado voters by helping incite violence against the body you were elected to, a body designed to serve us. By endorsing the president’s unsubstantiated and repeatedly debunked, discredited, and false claims of voter fraud, you encouraged and tacitly endorsed the actions of these terrorists and threatened the basic foundation of our democracy. The violence in Washington, D.C. yesterday by supporters of President Donald Trump was a terrible offense against the rights of every American to live in a free and fair democracy — an attack on our country and on our people. You and President Trump attempted to overturn the November 2020 elections after dozens of judges, the U.S. Supreme Court, and even the President’s own Attorney General rejected the false and outrageous claims that have fomented the violence we saw yesterday.

You are directly responsible for the destruction and mayhem that engulfed the U.S. Capitol and American democracy yesterday. Never in our history has such a baseless attempt to subvert the will of the voters been allowed to fester into violence inside the United States Capitol. Just three days ago, Rep. Boebert publicly announced her intention to carry a handgun into the Capitol in violation of local and federal laws. A woman was killed inside the Capitol, and violent insurrectionists brought their ammunition to the House floor. There were at least two suspected incendiary devices found in D.C. outside the headquarters of the Republican National Committee and the Democratic National Committee alike. Your sycophantic lack of leadership has endangered Americans. Every member of Congress who helped incite protesters to violence in the People’s House today has forfeited their ability to serve there. You have proven with your actions that you do not respect our democratic institutions, and therefore have no business representing the great state of Colorado in Congress — you must resign immediately.

Over the summer, Black and Brown protestors and activists peacefully demanded justice and an end to systemic and institutional racism. The National Guard was on standby then with a militarized police force who didn’t hesitate to use military tactics against peaceful groups, but when white extremists threatened the very foundation of our democracy, police took selfies with them and literally opened the gate for them. You and other conservative leaders issued exaggerated condemnations of racial justice protesters as being supposedly violent, but yesterday we saw true violence against our democracy play out, as the chickens of your extremism have come home to roost.

The events of January 6th 2021, which you each incited and directly encouraged, were a blatant assault on our country. Your role in yesterday’s violent failed coup makes you unworthy, and undeserving of the honor of representing Colorado in Congress. You violated the oath of office you took mere days ago — therefore we demand your immediate resignation and an end to your fanning of the flames that caused this attempted coup at once.

If Boebert was able to stir up this much frustration and ire in mere days on the job, just imagine what the next two years will be like.
KEEP WESTWORD FREE... Since we started Westword, it has been defined as the free, independent voice of Denver, and we'd like to keep it that way. With local media under siege, it's more important than ever for us to rally support behind funding our local journalism. You can help by participating in our "I Support" program, allowing us to keep offering readers access to our incisive coverage of local news, food and culture with no paywalls.
Make a one-time donation today for as little as $1.