The Mysterious Appeal of Lauren Boebert 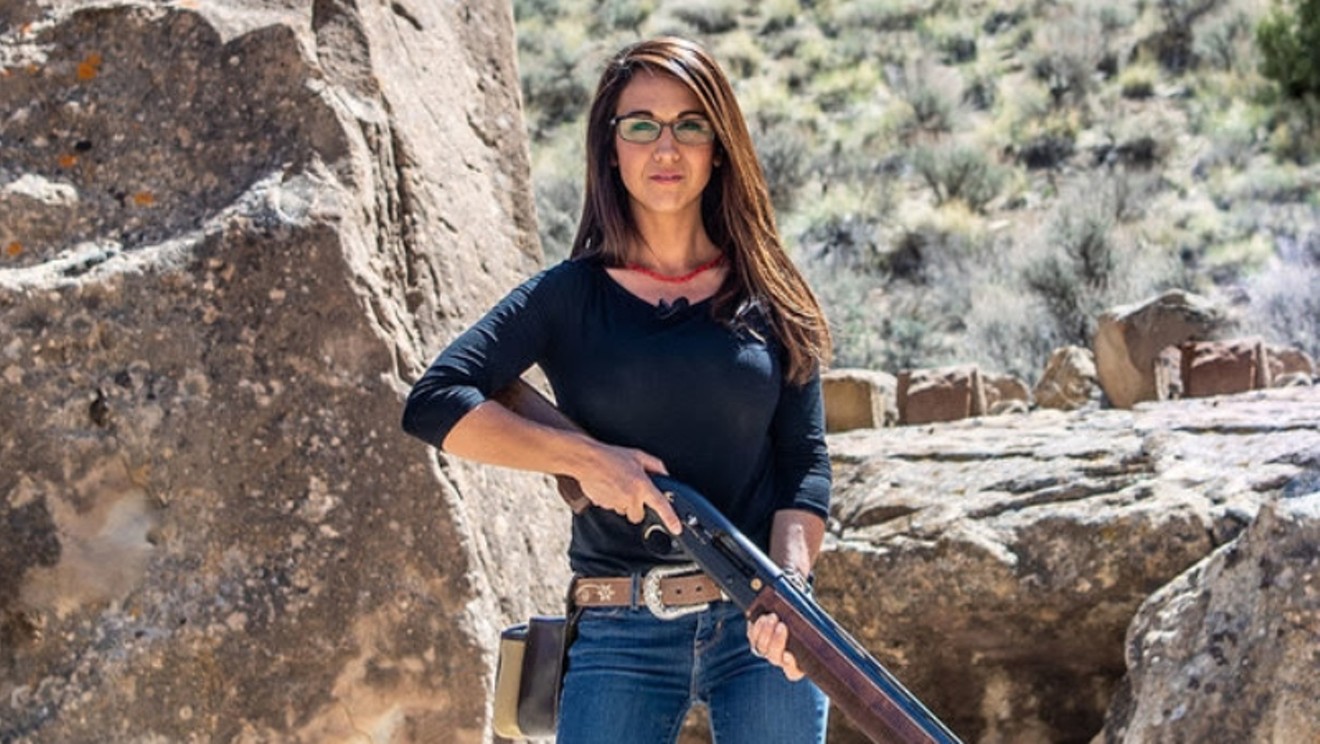 The Western Conservative Summit is promoting Representative Lauren Boebert's appearance with this photo. Western Conservative Summit
Among the draws at the upcoming Western Conservative Summit, an annual event put on by the Centennial Institute, the think tank affiliated with Colorado Christian University, is Representative Lauren Boebert. The first-term lawmaker from Colorado's 3rd Congressional District will speak in person at the high-profile get-together, which will take place June 18 and 19 at the Hyatt Regency Denver, as well as star in a thirty-minute documentary about Second Amendment rights to be released in conjunction with her appearance. The Summit is currently promoting Boebert's participation with an ultra-Freudian photo that features the rep in tight-fitting badass gear, holding a giant shotgun.

Putting Boebert front and center only makes sense to Centennial Institute director Jeff Hunt. He's rubbed shoulders with the superstars of the conservative movement in Colorado and beyond for years — Donald Trump was the Summit headliner in 2016, during his successful run for the presidency, and Donald Trump Jr. topped the marquee in 2019. But the way people reacted to Boebert during the filming of the documentary still managed to astonish him.

"We spent a day with her at a gun range in her district, and afterward, we went to Shooters Grill," he says of the eatery she co-owns in Rifle; the waitstaff there famously packs heat. "And the response she got from the people at the range and the restaurant was just so positive. I haven't really seen that among a Colorado elected official ever, and I've worked with all of them."

Boebert is seen very differently by folks on the opposite side of the ideological divide. Progressives derided her for allegedly playing footsy with QAnon believers and Proud Boys backers prior to her election in November 2020, and critics called for her expulsion or resignation after the January 6 attack on the U.S. Capitol over what they saw as her enabling of insurrectionists. Shortly thereafter, opponents aplenty announced their intention to run against her in 2022.

Yet Boebert is seen as a hero by many folks on the right, and Hunt has a theory why. "They appreciate her fighting spirit," he maintains. "She doesn't have an Ivy League degree; she just has a GED. But people appreciate her very commonsense approach to public policy. She's a mom, a business owner, and she got fed up about what the quote-unquote elites were doing in government. She's willing to fight for the common people."

Hunt's repeated use of the word "fight" could be triggering for those who saw the events of January 6 as an attempt to overthrow the government, and he does his best to put it into context.

"January 6 was rightly condemned by the university and by the president of CCU — because that's not who we are," he stresses. "I think everybody looked at that and were like, 'That's not what we hope to achieve,' and I think it gave a lot to the left. To me, it was worse for the conservative movement, because we've been so critical of riots that took place in cities last year and elected officials not doing anything. That's not the America we want to live in or how we want to achieve political ends — through violence. So when we're talking about fighting, we're not talking about arms or aggression or anything like that. We're talking about a willingness to achieve against the opposition. Look at what President Trump achieved, and the outright attempts by the left to stop his agenda at every single movement. But then look at his boldness to press through. That's what's appealing, not the violence."

At the same time, Hunt believes that Boebert, as "the first female to lead CD3, and the first mother," is a symbol of "a historic female conservative moment that's very exciting. We have some tremendous female leaders in the conservative movement, and you'll see a bunch of them at the Summit. We did a national under-thirty speech contest, working with Turning Point USA, which is a big national organization. We've done it ever year since 2016, and we said, 'Give us your best ten-minute speech.' And I would say 75 percent of the submissions we got were from females. That says a lot."

Hunt sees modern conservatism as following two streams, which he defines as "the grassroots and the intellectual — and the grassroots people are really looking for fighters. They don't want the type of conservative who lightly pumps the brakes on a leftist or liberal agenda. They want to go in the other direction, toward people like Lauren, who are willing to fight to the end. They don't want to go in the direction of saying, 'The liberal agenda is going to win eventually, but we're going to slow it down,' which is how they look at old-school Republicans."

The Summit doesn't take sides in the intellectual-versus-grassroots debate, Hunt contends. He points out that Stanford's Victor Davis Hanson, whom he sees as a great conservative thinker, is on the same bill as Boebert. Fellow Colorado reps Ken Buck and Doug Lamborn will also appear. But Hunt concedes that "people willing to fight are typically our top-rated speakers."

Even though most COVID-19 restrictions related to indoor events have been lifted, the Summit will move forward with a downsized in-person element. "We won't have the big stage with 2,300 people in the ballroom like in the past," Hunt confirms. "There will be about 500 people in person, and we'll focus more on online distribution, which has been a great success. We've traditionally been a regional summit, but last year, we had tremendous viewership across all fifty states — somewhere along the lines of 300,000 views. So we're going to have cameras in front, and if you watch it online, it's going to look like a TV program."

Among the documentaries that will debut during the Summit are Celebrating America's Western Spirit, starring Senator Ted Cruz and Representative Louie Gohmert, Next Generation Conservative Leaders, a salute featuring Benny Johnson, Isabel Brown and CJ Pearson. But Hunt is especially excited about Boebert's star turn, Honoring the 2nd Amendment and American Freedoms. "She's definitely one of our biggest draws," he concludes.

Click to get more information about in-person tickets and online registration for this year's Western Conservative Summit.
KEEP WESTWORD FREE... Since we started Westword, it has been defined as the free, independent voice of Denver, and we'd like to keep it that way. With local media under siege, it's more important than ever for us to rally support behind funding our local journalism. You can help by participating in our "I Support" program, allowing us to keep offering readers access to our incisive coverage of local news, food and culture with no paywalls.
Make a one-time donation today for as little as $1.