"What the F*ck Did I Do?": New Video Sheds Light on Body-Slamming Case 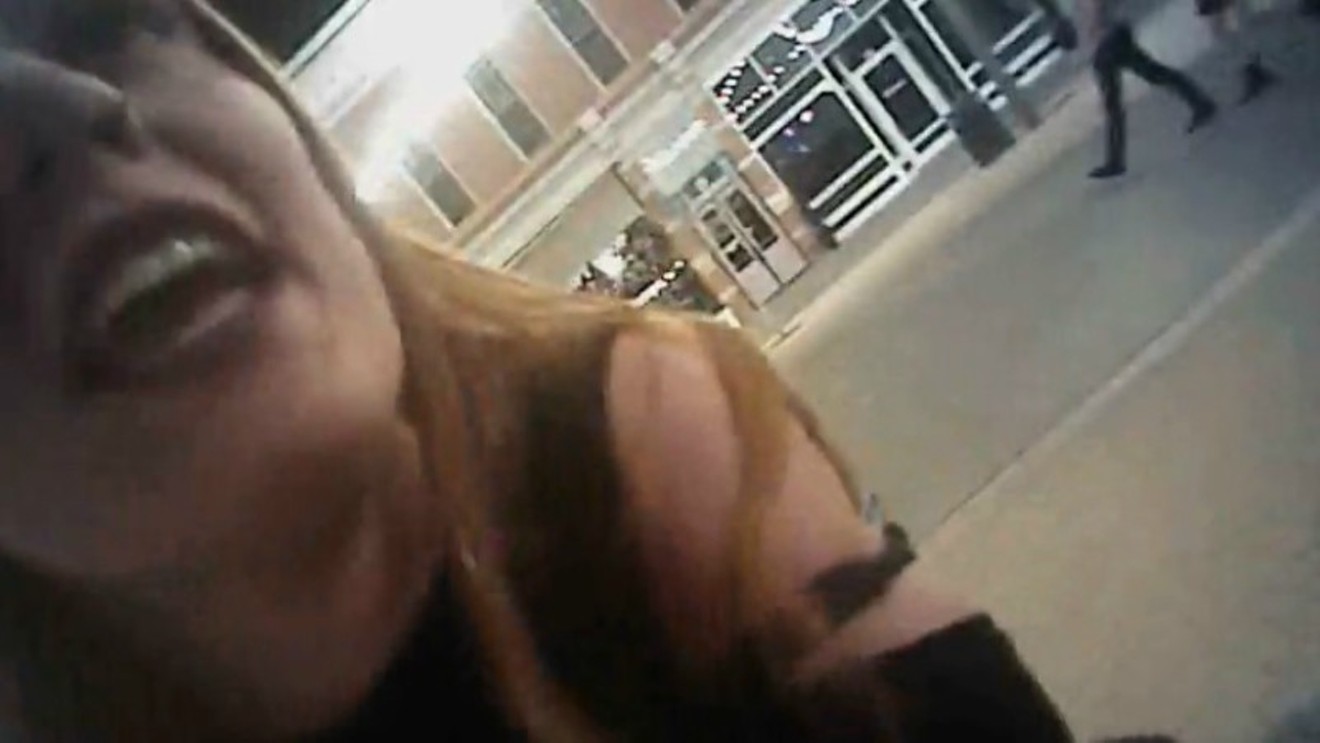 Michaella Surat as seen in body-camera video from April 2017 seconds before being thrown to the ground. The complete clip can be viewed below. Lane, Killmer & Newman, LLP
In newly released body-camera video that can be seen here, Colorado State University student Michaella Surat asks Fort Collins police officer Randy Klamser, "What the fuck did I do?" as he tries to arrest her. Klamser tells her, "I don't want to throw you on the ground" seconds before doing just that.

The body-cam footage is the latest development in an incident that's made headlines since April 2017, when a different video of Surat being body-slammed by Klamser — this one shot by a bystander on a cell phone — went viral. Afterward, Surat was arrested, and this past January, she was supposed to go on trial for alleged obstruction and resisting arrest. However, a mistrial was declared before a verdict could be reached. Prosecutors subsequently decided to re-try Surat, but on Monday, April 31, Judge Joshua Lehman continued the proceedings until August after David Lane, Surat's attorney, argued that statements she made after she was victimized in three unrelated domestic-violence attacks shouldn't be used against her.

Lane contends that Surat's comments are examples of battered-woman syndrome that district attorneys commonly contextualize when they're trying to put abusers behind bars.

That Mitch Murray, the chief deputy DA in the matter, planned to take the opposite tack when it comes to Surat "represents hypocrisy of a magnitude I've rarely seen," says Lane, who contends that Klamser "committed felony assault and then lied about it." He promises that once the criminal case against Surat is resolved one way or the other, he's going to file a lawsuit in her name.

On April 6 of last year, Fort Collins police officers were called to the Bondi Beach Bar in Old Town because Surat's boyfriend got into a fight with another man. During opening arguments for the January trial, Murray maintained that when officers arrived, Surat and her boyfriend were trying to get back into the bar after he'd been kicked out. He asserted that Surat was generally uncooperative, hitting and grabbing the neck of Officer Randy Klamser, as well as trying to get a crowd that gathered to turn against the cops.

Klamser responded as seen in the following clip, which is brief but shocking.


The footage soon aired on Good Morning America and other network outlets. But no apologies to Surat were forthcoming. Instead, she was arrested because "the summons Klamser filled out said she assaulted him," Lane notes. "Those charges were later dismissed by the DA, who felt they had no chance of proving them. But she's still facing resisting arrest — and the cop's line from the beginning has been, 'The cell phone video that went viral doesn't tell the whole story. Wait until you see the body cam.'"

Now, thanks to Lane, you can, and he feels the images further undermine any suggestion that Surat got what she deserved. "He said that she reached up, grabbed his throat and dug her nails into his neck. But the body cam shows that never happened."

He acknowledges that Surat isn't entirely passive during the exchange, "but even if she was resisting, it was at a very minor level — and the use of force was so extreme and excessive that a civil-rights lawsuit can be successfully prosecuted. So that's what I'm going to do. Even if she's convicted of resisting arrest, I'm still going to file the lawsuit."

In regard to the continuance, Lane lays out the events that led to it.

"After hours last Friday [April 27], the DA sent me a ton of new discovery," he recalls. "And what that discovery showed is that Michaella Surat had been the victim of domestic violence on three different occasions — and even though she had bruises and a black eye when the police came, she told them, 'Oh, no, he didn't touch me. He did nothing to me. When I cry, my face swells up — and I get very emotional. I fly off the handle a lot.'" 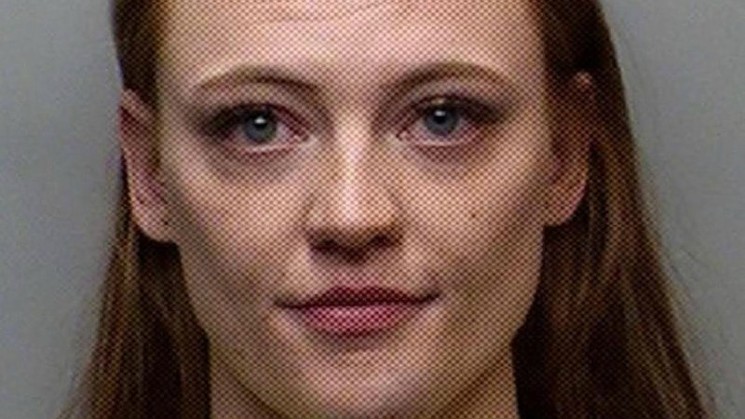 Michaella Surat's booking photo.
Fort Collins Police Services
It didn't take long for Lane to figure out that Murray and his team wanted to use these last few statements to suggest that Surat had reacted similarly in Old Town, forcing Klamser to take the action he did. But in his view, her comments are a classic example of battered-woman syndrome, "where victims will say anything to avoid a future beating from their accuser. If they can rescue their abuser from being arrested by police, they think they won't get another beating — but if the abuser goes to jail, they fear worse retaliation."

Such reactions are well known to prosecutors, Lane stresses. "When women come to testify against their abusers, defense attorneys will try to impeach them with the statements they've made earlier. But then the DA will put on an expert who'll explain to the jury what battered-woman syndrome is all about and why these women lie to police."

With that in mind, Lane continues, "I went to court on Monday and said, 'What is the possible relevance of all of this discovery on her being a victim in this trial? This is all a product of battered-woman syndrome.' And Mitch Murray says, 'It might be, but she can tell a jury that.' And I said, 'She can't tell a jury that. I need an expert to come in and explain it, just like you do in every battered woman's case you've ever prosecuted.' And Mitch Murray stands up and gives one of the most hypocritical statements I've heard in a court in years: 'You don't need an expert to explain battered-woman's syndrome to a jury.'"

Judge Lehman initially backed Murray's contention, much to Lane's disbelief: "I said, 'This ruling is a sexist ruling, and the argument by the DA is a sexist argument. I'm sure every women's advocacy group in Colorado is going to be interested in hearing that Judge Lehman is going to let a domestic-violence victim be badgered by the deputy district attorney and made out to be a liar with no opportunity to explain what battered-woman syndrome is, even though it's been a black-letter part of Colorado law for thirty years.'"

At that point, Lehman called a recess, and when the session started up again, Lane relates, "The DA said, 'We don't think they need an expert, but we don't oppose a continuance if you want to get one.' So the judge granted a continuance."

Not that this decision placated Lane. Look below to see the aforementioned body-camera footage. The interactions that led to the body slam begin shortly before the one-minute mark.


Lane hints that the cops who responded to Surat's domestic-violence incidents were more interested in protecting their fellow officer, Klamser, than supporting an assault victim. "They immediately recognized her — 'You're the girl from that viral video.' And then they played on battered-woman syndrome to get her to tell lies to the police. And she's really afraid of the police, who are there to investigate the abuse — and the abuser has already pleaded guilty. He's scheduled to be sentenced in May."

What's next? "I'm going to file a motion to get a special prosecutor on this case," Lane says. "I'm going to ask that the court be recused on the grounds that they show overt hostility to the plight of battered women."

Surat "was abused by this cop, and instead of charging him with the crime he should have been charged with, the prosecutors charged her," he allows. "They're so determined to cover up this cop's crime despite all the video evidence and despite the fact that he lied in his reports to the point where the DA dismissed the assault charges against her. And now they're arguing that there's no need to explain battered-woman syndrome to a jury when they want to use that against her in this trial? Really?"